Someone Call A Doctor! (Or a Surgeon)

We were reminded of an old joke the other day. It’s probably frowned upon in these ultra PC days, but what the heck – here it is;
Two unemployed Irish men were walking through the woods one day, when they saw a sign saying Tree Fellers Wanted.
Paddy turned to Murphy and said, “Oh begorrah, it’s a shame there’s only the two of us.”

And so it was, that three tree surgeons turned up to have a look at our trees, at the behest of The Idiot Builder’s insurance company.
Primarily they were interested in our huge ash tree, which dominates one corner of our plot. It’s a fabulous tree, but suffers from two issues. One, it’s  quite old and needs a bit of TLC and two, it’s in the way of where the SR30 needs to operate for the next phase of 50 something piles.
This required our Three Fellers to carry out, what they called some “light reduction”. Historically, in our household, ‘light reduction’ means, hack down to the roots, so Helen was a wee bit apprehensive as the the level of reduction that was likely to be inflicted on our poor old tree. Luckily, after speaking to the Chief Surgeon (Neil), it was apparent these Three Fellers knew what they were about, so we sat back and watched them work. 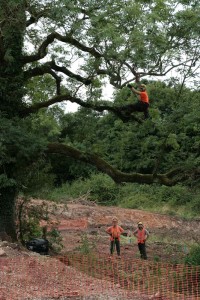 The initial approach was carried out by one of the young surgeons (let’s call him Swampy), who attached himself to a harness, a seat-like thing and a large number of different coloured ropes. Using a fetchingly coloured yellow rope he was able to hoist his own bodyweight up the tree, in a sitting position, to the first large bough. (That’s bough as in bow, not bough as in bow (the thing you fire arrows with), or Bough as in boff, aka Frank, he of prostitute and cocaine fame).
If you’re reading this and English isn’t your first language, I can only apologise. Most of us don’t understand it either!
Anyway, all this vertical ascendance was clearly one of those things that looked an awful lot easier than it would be in practice, as I’m sure I’d still be swinging 2ft off the ground, even now, if I tried such a thing.

Before long Swampy had ascended the tree and was slinging more ropes hither and thither so he could abseil, in a comfy looking seated position, to any lower branch of his choice. It was these lower branches that soon came under the scrutiny of his deceptively small-looking Stihl chain saw. Even though the lower limbs of our monster tree are pretty large, they present no challenge to a two-stroke powered toothed chain. With the smell of oil and a strangled cat-like noise, they were very quickly dispatched to a position lying on the floor, ready prey for Tree Feller number two to chop up into smaller bits with his saw of chains.

Before long, our entertainment for the day had ended, as the Three Fellers finished their operation and retired to a safe distance, leaving our tree in a very nice, lightly reduced state.

In other news, our plea for help hasn’t fallen on deaf ears, which is great!
We’ve had offers of help from various people and expressions of regret from others that can’t make it due to previous commitments. Either way, we’re so grateful for your thoughts and messages.

However, we still have plenty of opportunities for people to enjoy a free night or two at The Laurels, in exchange for a few hours work. Don’t be put off by our request for ‘keen DIYers’. We don’t really want to put anyone off, we could just do without someone painting our breakfast room who’s never wielded a paintbrush before. We do have plenty of other things to occupy people of all abilities though. So even if you’re not used to getting your hands dirty, or have never met us, except virtually through Facebook or our blog, do get in touch. We don’t bite, honest.

Did The Earth Move For You Too?

Just a teeny weeny update today. Things are moving so fast now it’s almost impossible to keep up with them.

Now the MIBs have access to Plutus’ field, they’ve wasted no time in starting to build the access ‘road’ between their site and us.
This will allow the piling machine to install an additional 45 piles in the lower scheme, next to The Idiot Builder’s excavation, as well as allowing the MIBs access to our place, without having to trundle up and down our drive all the time.

To that end, with lots of earth being moved from one place to another, I took the drone up for a little fly round to see things from an aerial perspective.

Our concrete and steel jungle continues its inexorable growth around The Laurels.
Thanks to the addition of around 30 cubic meters of the grey, sloppy stuff, our first pile cap is now complete.
Luckily this was all delivered by a series of large lorries beep-beeping their way backwards up our drive, as 30 meters of concrete is the equivalent of around 2,000 bags, weighing around 64,000 kgs. A tad too much for a cement mixer on hire from HSS  and a wheel barrow. 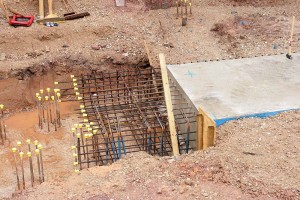 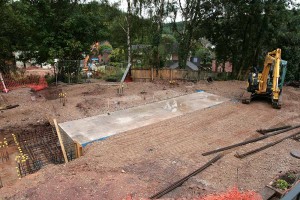 This cap is now in the process of being joined to it’s yet-to-be-built neighbours and the slab on which our garage extension will sit (if we can ever afford to build it of course). One benefit of all this work though, is that a large amount of old, untidy shrubbery has been removed, saving us a job later on, and making the place look larger to boot. 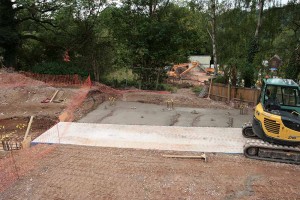 In the meantime, our old green, unsightly storage container had to be removed. This was the work of moments however, as aluminium sheet, just a few millimeters thick is no match for the steel bucket of a JCB type thingy.
One of our MIBs dismantled the container in just a few minutes, skillfully folding up the aluminium panels with his machine, before plonking them into a waiting dumper truck.
The whole operation looked like a giant hand folding aluminium cooking foil with a pair of tongs. 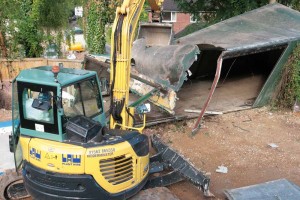 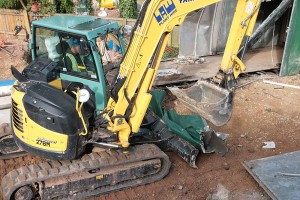 In other news (of the good variety), we’ve now received the plans we’ve been waiting for to repair our rear bank and wall. More importantly, we also know how much it’s going to cost us. Whilst we’re still talking about a huge sum of money, it’s turned out to be slightly less than some of our earlier estimates – which is great.

This means we can finally start looking forward with confidence to our opening date (hopefully Easter 2016), instead of looking backwards all the time.

Over the last 18 months or so, it’s got be said, we’ve had some very tough times. On occasion, we’ve felt like giving up completely and going to live in a hole somewhere. However, apart from giving up not being in our nature, we’ve also had the support of a large number of people – many of whom we’ve never even met. This has meant a great deal to us. THANK YOU!
One of the things we’ve been asked many times over this period, is whether people can do anything for us. As you know, we hate to disappoint, so here’s your chance to bag yourself a free night or two in a B&B, whilst helping out in a practical way at the same time. Plus, you get a chance to have a nose around the place too. What’s not to like?!

Here’s the deal then. We’ll offer a free night (or two) at The Laurels, including Helen’s excellent breakfast, in return for a minimum of 5 hours of practical, hands-on work per night’s stay. This means you’ll still have time to explore our local area and find out how fantastic it is.
As we’ve no idea how many people will kindly give up their time to help us out, can we ask that you email us to let us know if you’re up for it.
Now, before you get all excited at the prospect of helping us out, in return for a bed and a scrummy (we hope) breakfast, let us outline what, or perhaps more accurately who, we’re looking for.
Namely, keen DIYers, or professional tradesmen(women) who can turn their hand to any of the following;

We’re not going to operate this like some Socialist Drop-in Center, more like care in the community, for anyone mad enough to turn up, so the following dates are the only ones (at present) we think will be suitable.

If you even think about helping us out, but can’t make it – Thanks a million. We really appreciate it. After all, it’s the thought that counts.
Better still, if anyone turns up, we really will be eternally grateful.

Much progress has been evident recently.
Our MIBs have been very busy working on the first of 4 piling slabs. This has required the continued excavation of over 20 of the buried piles, in order to allow the rebar (steel rods) to be exposed. 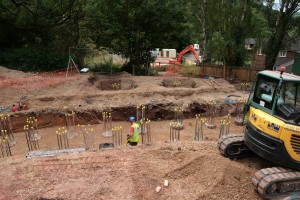 In case you’re wondering, the little yellow mushrooms are there to prevent someone plucking an eyeball out on an exposed piece of steel.

The next stage is to join up each of these piles, to increase the strength of the individual parts, into one massive construction.
This requires the whole thing to be encased in even more steel and concrete (just in case there wasn’t enough there already). The resultant steel jigsaw took several days to complete, given the designer’s requirement to have steel every 150 mm over a slab length of around 8 meters. 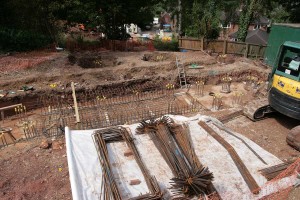 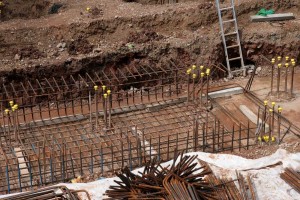 Whilst all this underground steel sculpture was being created, there was an even more important job going on at the same time.
This was being carried out by NDT Man. That’s non-destructive testing to you and me – which basically means testing things without breaking, or rendering them unusable.
The guy who tests the matches in the Swan Vesta factory clearly doesn’t adhere to NDT requirements, as he strikes a match and proudly announces “That one works”.

NDT Man uses a bit of kit which is essentially a very big yellow hammer. Luckily it’s on the end of a little tracked vehicle, so he doesn’t actually have to engage in any Thor-like activity. 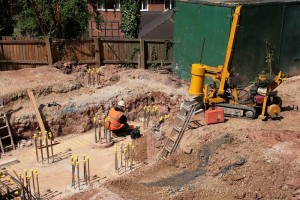 The giant yellow hammer is then bashed into the top of one of the piles. Subsequently, using some techy measuring equipment, the resultant stress wave is analysed as it travels down and back up the pile.
Using the formula;

where,
Q = Applied load
L = Total length of pile
A = Cross-sectional area of the pile
E = Modulus of elasticity of the pile

Having gone through the maths, we think the answer is probably 42, although we could be thinking of another question entirely.

Apparently, if the piles fail this test they have to be dug up and they start all over again.
Luckily, the man from NDT say, YES!