After much waiting for this marvel of sparkling black sparkliness, the worktops were humped up the steps and fitted into their rightful place atop our bare kitchen units. 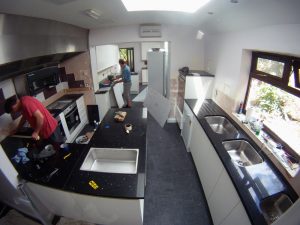 This left us in the position of having to fit the remaining kit into its rightful place. Simple things like taps, hobs, cookers, bains marie. Bains marie? I hear you say. Yes, you know bains marie. The thing that keeps the mushrooms and beans warm and moist in the mornings 🙂
According to the dictionary, it’s pronounced bɛ̃ maʁi. (Like that helps).

The name apparently comes from the medieval Latin term balneum Mariae, or Mary’s bath, from which the French bain de Marie, or bain-marie, is derived.
The device’s invention has been largely attributed to Mary the Jewess, an ancient alchemist. However, some consider the name a reference to the Virgin Mary (you may have heard of her), whose proverbial gentleness can be likened to the gentleness of the cooking techniques using said device.
All I know is – it’s a bit of a bugger to fit into a worktop when you’ve got 2mm of clearance, but the cable, switches and knobs are at last 10mm bigger than the hole it’s going into 🙁
The result of which, required me to virtually disassemble said bath, squeeze it into an unfeasibly small hole, then reassemble it in situ. But hey, that’s one of the hats you have to wear when you open a B&B 🙂

For those of you with a slightly sadistic bent, here’s a speeded-up version of our efforts.

9th August 2014
According to the Royal Society for the Prevention of Accidents (RoSPA), around 220,000 DIY enthusiasts end up needing hospital treatment every year.

Of these, 87,000 are hurt while using tools or machinery, 41,000 injured as a result of falling off ladders or stepladders and 60,000 ends up requiring attention because of exposure to grit, dust or splinters.

Perhaps, more importantly, RoSPA says floor or wall tiles are responsible for around 2,500 visits to A&E every year.

As I’m sure most of the readers of this blog will already realise, there is actually a reason for me mentioning this, apart from my love of statistics. 🙂
And you’d be right;
As we continued the task of tiling what seemed like 76,815 sq ft of tiles (as the BBC are so keen on representing every area based on a football field, I thought I’d join in) I nearly became one of these statistics.

Now clearly I’ve enough experience and common sense to wear goggles when cutting tiles, but what I’d overlooked was the necessity to wear a hard hat too!

It may have been our fault because we were using ‘lazy man’s adhesive’ (i.e ready mixed) but I doubt it. In fact, I may have to challenge the manufacturers on their description, because clearly the only thing this stuff adhered to was fresh air.

Anyway, despite having tiled many a bathroom and kitchen over the years, the unexpected happened today.

There I was, bending down sticking a tile to the wall when, for some inexplicable reason (I blame gravity, but that’s another story) a very large tile, of approx 50cm x 20cm decided it was fed up with its close relationship with the wall and would plummet approximately 3ft to the point where it impacted my head. Well my glasses and eyebrow to be exact, but who’s counting.
I’m sure, if I thought about it long enough (and I didn’t have a concussion) I could work out its velocity at that point – no doubt something to do with 9.82 m/s2, the distance fallen (1 meter) and its mass (heavy), but I was too busy going “Bloody hell that REALLY hurt!” 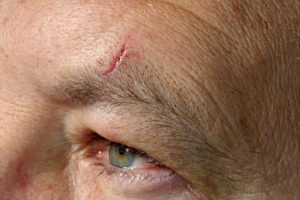 Luckily it actually impacted my glasses first and although it damaged one of the lenses, it saved my cheek from being sliced asunder, as it carried on and assaulted several thousand pounds worth of quartz worktop.

Oh well. Tomorrow’s another day and we still haven’t finished the tiling. 🙂

14th August 2014
Suffering from some technical difficulties with the website at the moment, so things may look a little different. Sorry about that.
I’ve tried turning the computer on and off again but that didn’t fix it, so I guess if the hammer doesn’t work either I may have to call in the professionals.

The last wall tile has now been fitted (hooray!), so we’re off on a few days hols to relax. 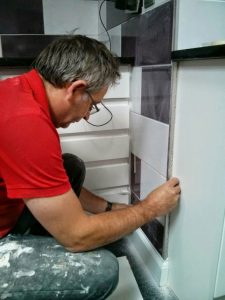 We’re leaving Helen’s parents in charge, so hopefully, there’ll be no wild parties in our absence.

20th August 2014
Having returned from our trip around Southern England, we thought it a good opportunity to upload some photos of the kitchen, before we fill it full of stuff. 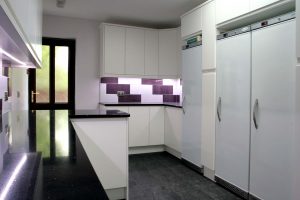 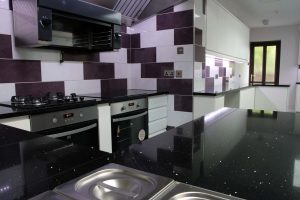 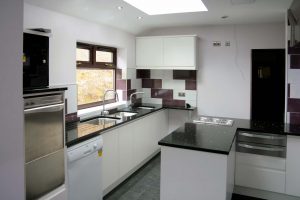 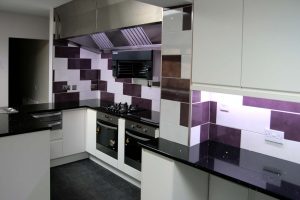 A slightly more comprehensive update will follow, once we’ve gotten over the stress of being back down south.

22nd August 2014
It would seem the Summer of ’14 has come to an abrupt end, given the somewhat chilly morning that greeted us today.

The BBC weather forecast suggested we should expect a mostly dry and sunny day, with occasional showers and periods of rain. Nothing like hedging your bets then.

Undeterred we took a trip to Ilam, to act as the starting point for a short walk. In 1820 the Ilam estate was bought by Jesse Watts-Russell, a wealthy industrialist. It was Watts-Russell who was responsible for the Swiss look of the village, as he found the valley and surrounding hills reminded him of the Alps. Consequently, he had some new cottages built in the Swiss style. 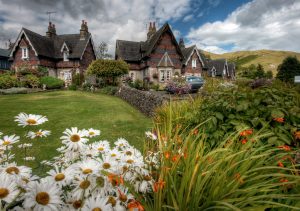 Having started out on our walk by sauntering down by the river, we spotted a bird flying in a very un-birdlike way. As it flew very close overhead, it turned out this unlikely aviator was in fact a bat.
Perhaps this little Pipistrel was unusually hard of seeing and didn’t realise it was the middle of the day, but it seemed happy enough flitting around chasing insects. Either that or his echolocation system was down, and he was making the most of his limited eyesight. Who knows?!

On our return to Ilam, after stuffing our faces with ice cream, we discovered that we’re not particularly knowledgeable about Oak trees either.
Apparently the strange knobbly things masquerading as acorns, on the trees we saw, are in fact called Knopper Galls, which are caused by a Gall Wasp infecting the acorn. 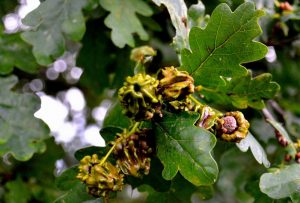 As they say. Every day is a learning day.

24th August 2014
Sometime last week we left Helen’s parents in charge of things, on the proviso there were no wild parties in our absence.
Whilst we can’t conclusively confirm said party never took place (you know, strange stains on the carpet, pictures moved to hide wall impact damage – that sort of thing) they were roused at 5 a.m, the day before our return, so who knows.
Given that the PILs (parents-in-law) timeshift their day approximately 3 hrs later than ours, 5 o’clock is REALLY early for them.
“What the hell has this to do with the price of fish?” I hear you cry (well probably only if you’re over 45). If you’re under 30, it would probably be some 3 letter acronym beginning with W.
Well apparently, the source of the unreasonably early rousing was in fact the fire alarm going off – and no one’s going to sleep through that, I can tell you!
Now, Helen’s Dad may be old(ish), but he’s not daft (yet), so he didn’t make the mistake of other crispy, dead people and assume it was a false alarm or a drill. Instead, he proceeded to the upper floor, as indicated by the fire panel, and checked the bedrooms.
Sure enough, the detector in one of the bedrooms was illuminated in an “I’m on fire!” kind of way.
Luckily(ish) what it should have been saying was “I’m drowning!” as when the FIL (go on, you can work it out) removed the detector it was followed by a stream of water.
Now, even those of you of a non-technical bent will realise smoke detectors run on electricity and not water. This fact wasn’t lost on the FIL either, so he dived into the loft to investigate. To cut a long story short, it turns out the water was coming in through the roof, which was obvious to me too when I arrived home to investigate and found I could see daylight when in the loft. This is not a good thing.

Previous readers of this purple prose will know my thoughts on being a Roofer, ‎(It’s a rubbish job) but it’s a hat I had to don again in the last few days.

The cause of daylight (and inexorably water) entering the loft was this; 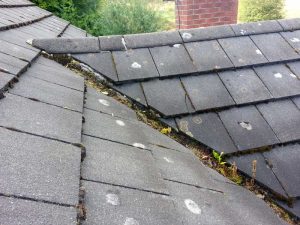 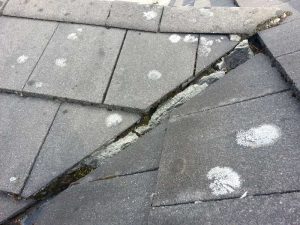 It seems 32  years of wind and rain have taken its toll on the roof valleys. The mortar holding the tiles in place has mostly fallen out, and we clearly have rain made up mostly of soil in Oakamoor as the valleys were full of enough soil to plant out rows of potatoes!

This is what one of them looked like after a good clearing out; 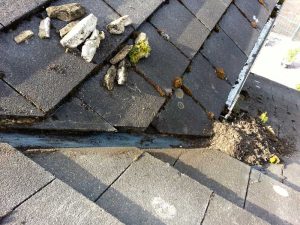 After spending a few hours scaling the roof we now have a few of the valleys looking like this; 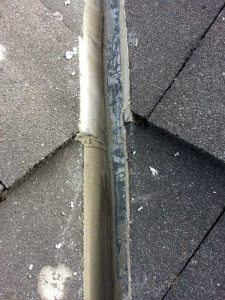 Hopefully, the rain will now run down the roof, where it’s supposed to, instead of into the bedrooms, via the loft. 🙂