Well, the boring guys duly disappeared off to the farmer’s field today, despite their worries that permission hadn’t been granted (it had) and that they may have to avoid some shotgun pellets, whilst pounding holes in his land. 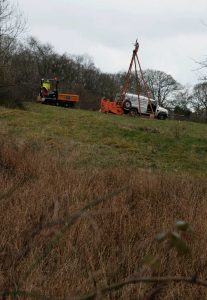 It’s a measure of the extent of the landslip, that huge gaps are appearing in the field right up to the tree line in this photo.
The photo below shows the current impact on our drive. 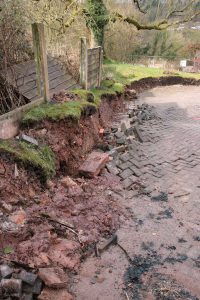 The fence panels are falling out, not due to the recent high winds we’ve had, but because the concrete posts are moving further apart, as they move downhill towards the excavation.
The block paviors are pushed up because the land is also moving left to right, squashing the drive to such an extent, it’s at least 12″ narrower than it used to be.

We also saw the arrival of the drilling rig today. I must say it reminded me a little of the rig carried in Thunderbird 2. 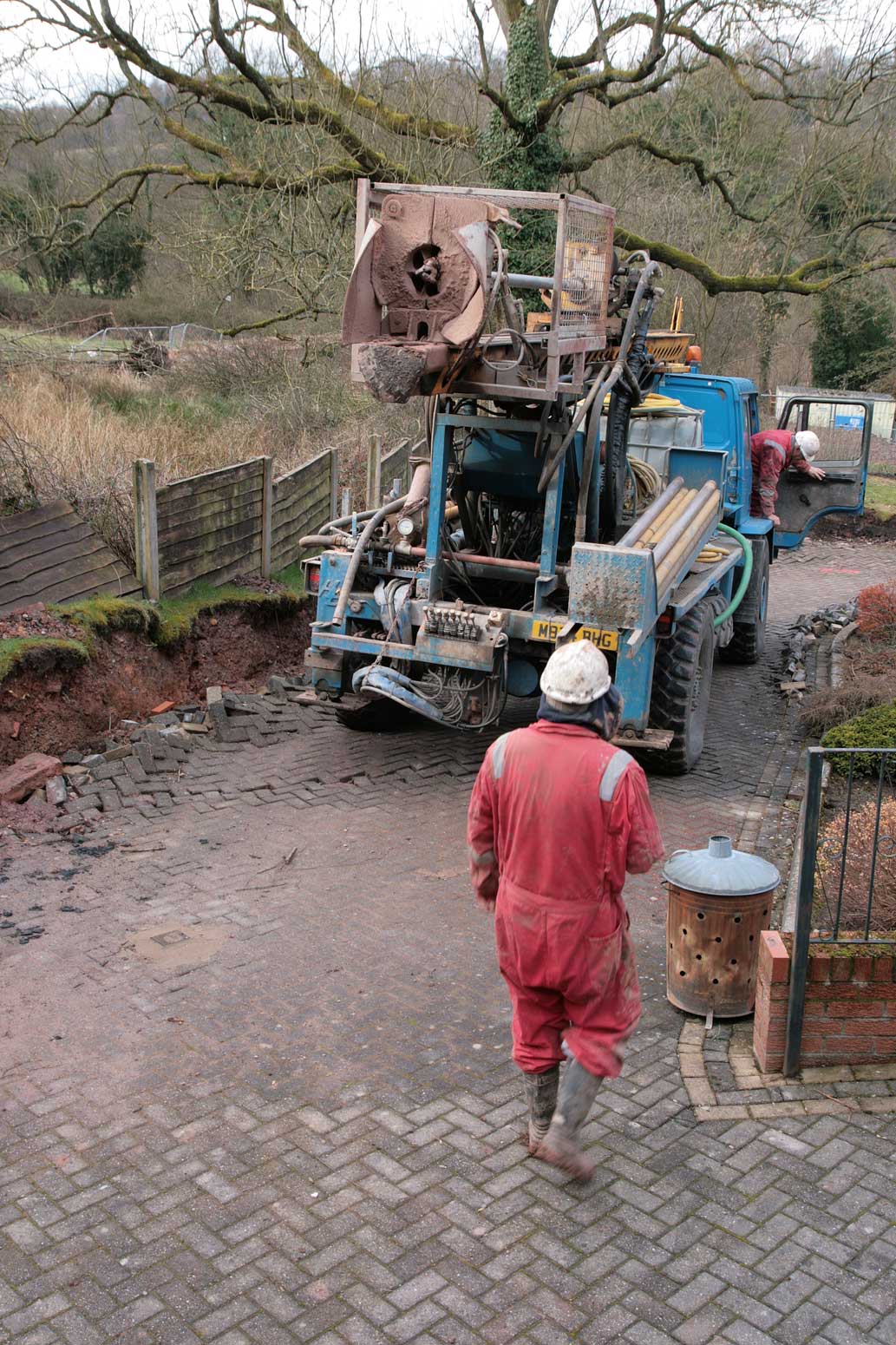 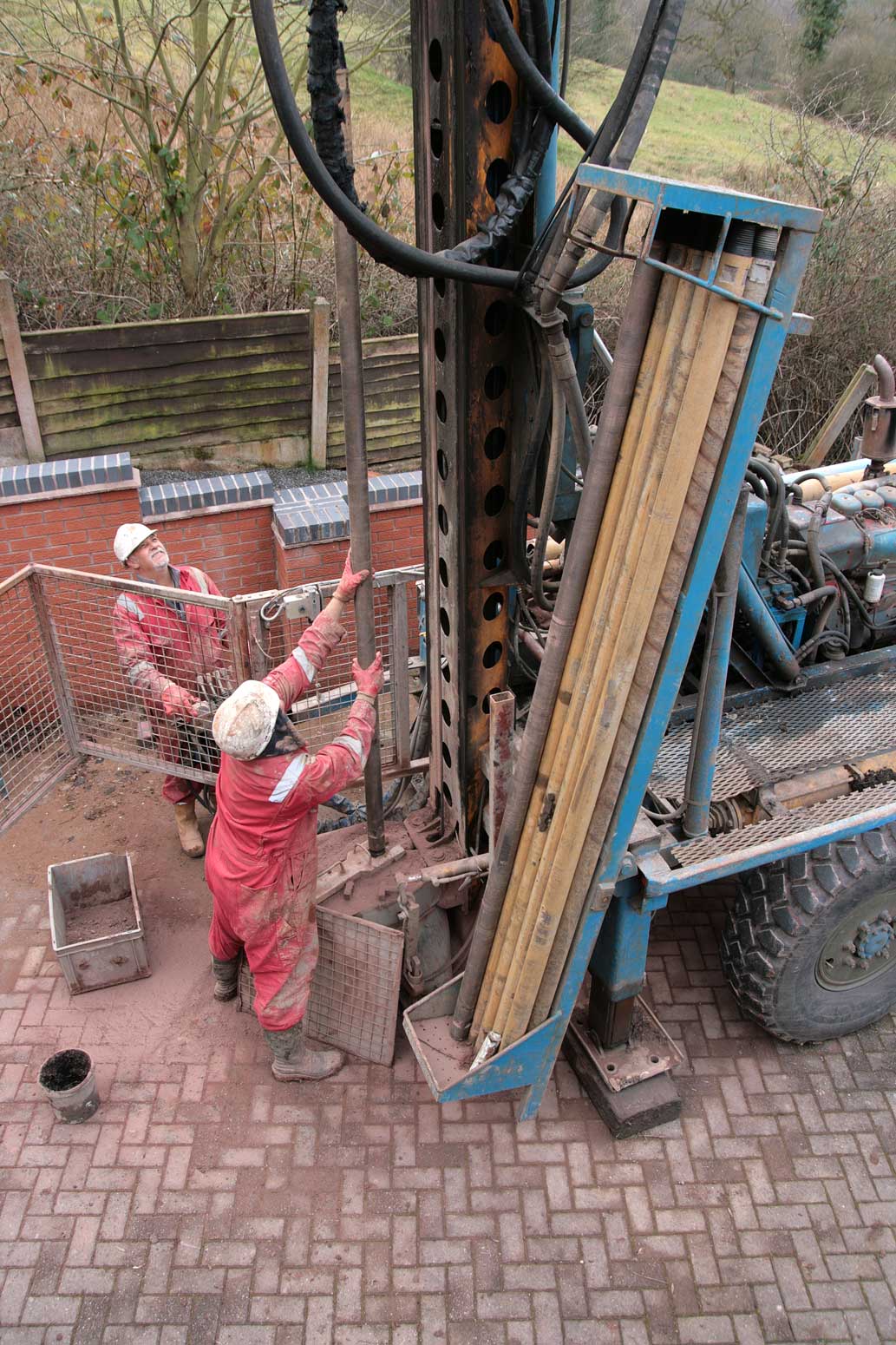 They set about taking more soil samples down to about 60′ so they know how deep the piles will eventually need to go. 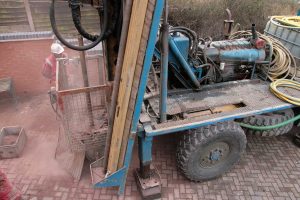 This is very messy work, especially as they have to inject water in at the same time to enable the samples to be extracted. This all leaves behind a nice brick red sludge which just adds to the general look of a building site here now.

I also put up my automatic camera to record progress, so here’s a Benny Hill-type time-lapse video for your delectation.

March 27th 2014
After staying overnight with some friends, it was like Piccadilly Circus here this morning when we arrived back. Three different rigs and six men were engaged in various levels of planning work. When I say planning work, what I really mean is, they were standing around chatting – planning to do some work.

In due course, they all headed off to their allocated machines and started attacking the ground with much gusto. So much so, we could feel the vibration underfoot as we headed indoors for a cuppa.

The new boy on the block is a mini boring machine. What he lacks in size, he certainly makes up for in noise. This deafening little bugger is a percussive boring machine, which means it bashes its way into the ground by continually dropping a heavy weight, from height, onto the boring bit. 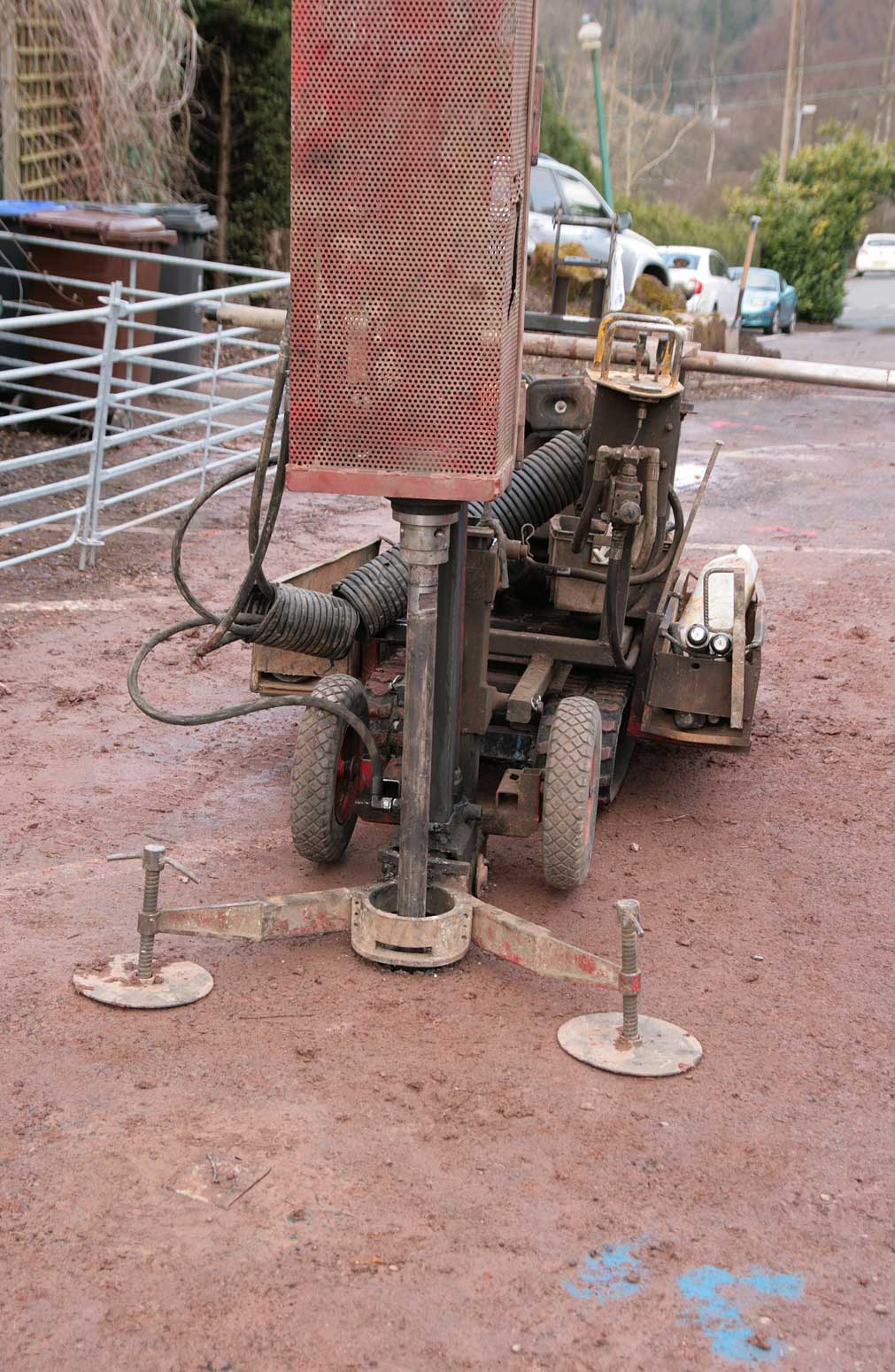 This was brought in, as the large boring machine had gone down to nearly 70ft without finding anything hard. The assembled boffins found this a little disconcerting, so they wanted to find out the extent of this ‘soft area’.
By boring five holes around the original, they hoped to find that was just a small anomaly, rather than a large area of previous excavation.

The area we live in is called ‘The Potteries’, which unsurprisingly is where they made (you guessed it) pots. In the past, the local area was used to dig out clay (or marl) from so-called marl pits. The main concern is that part of our drive is over an old marl pit, which would explain the deep area of made-up ground. If this proves to be the case, I’m lead to believe the design of the final solution would need to be changed to take account of this. So it’s important they find out asap. 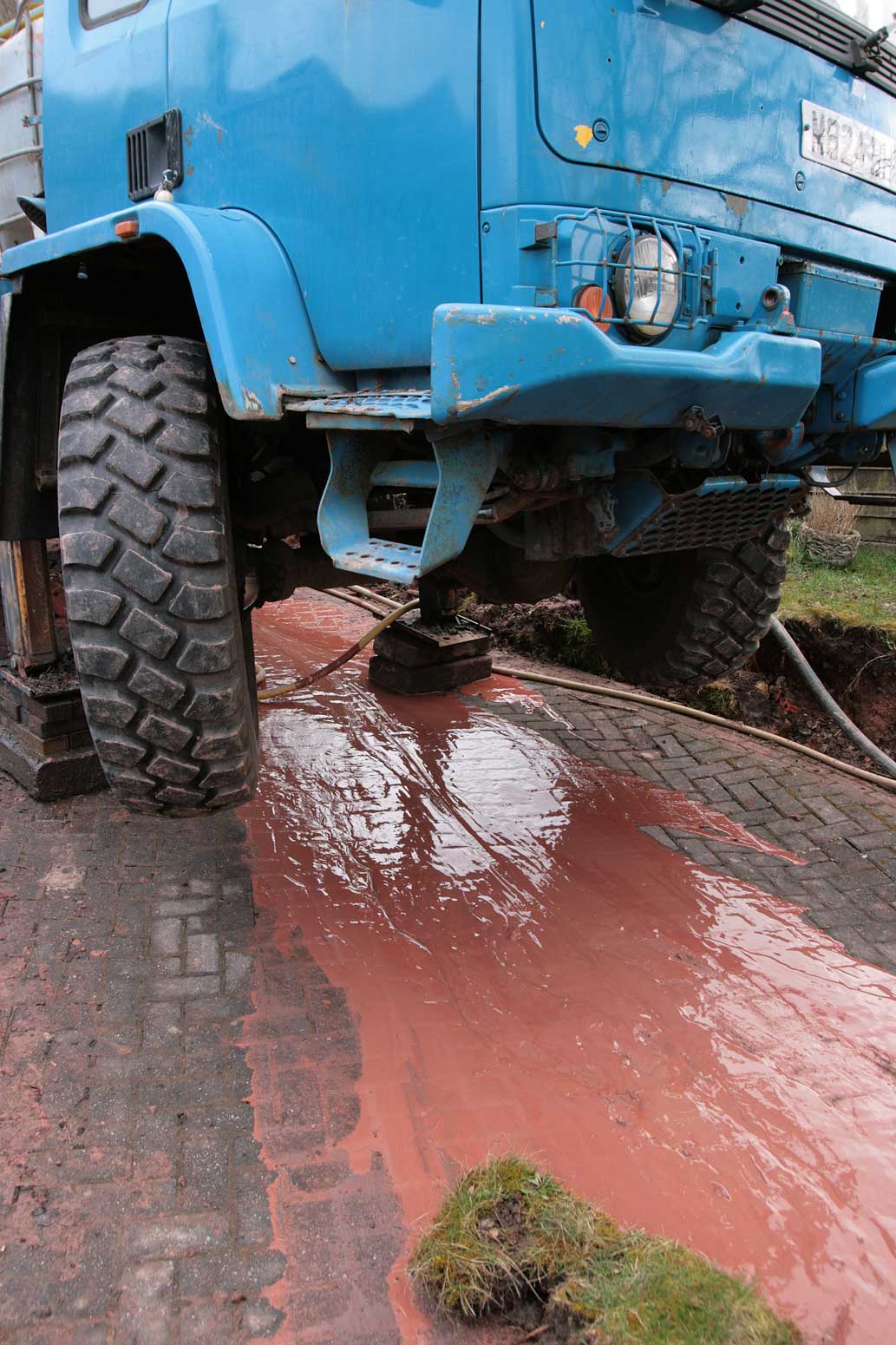 March 31st 2014
Much drilling, boring and digging took place today as the assembled boffins were still keen to find how far down the foundations of the building go.

I’d already told them it must be “quite a way” given the fact that the house hadn’t gone anywhere yet, despite the earth around it moving in an alarming fashion.
The two previous attempts were aborted after a reasonable amount of spadework by men in boots had gone down to about 5ft. Unfortunately, even at this depth, the concrete foundations had alluded them, so they called in something more substantial. 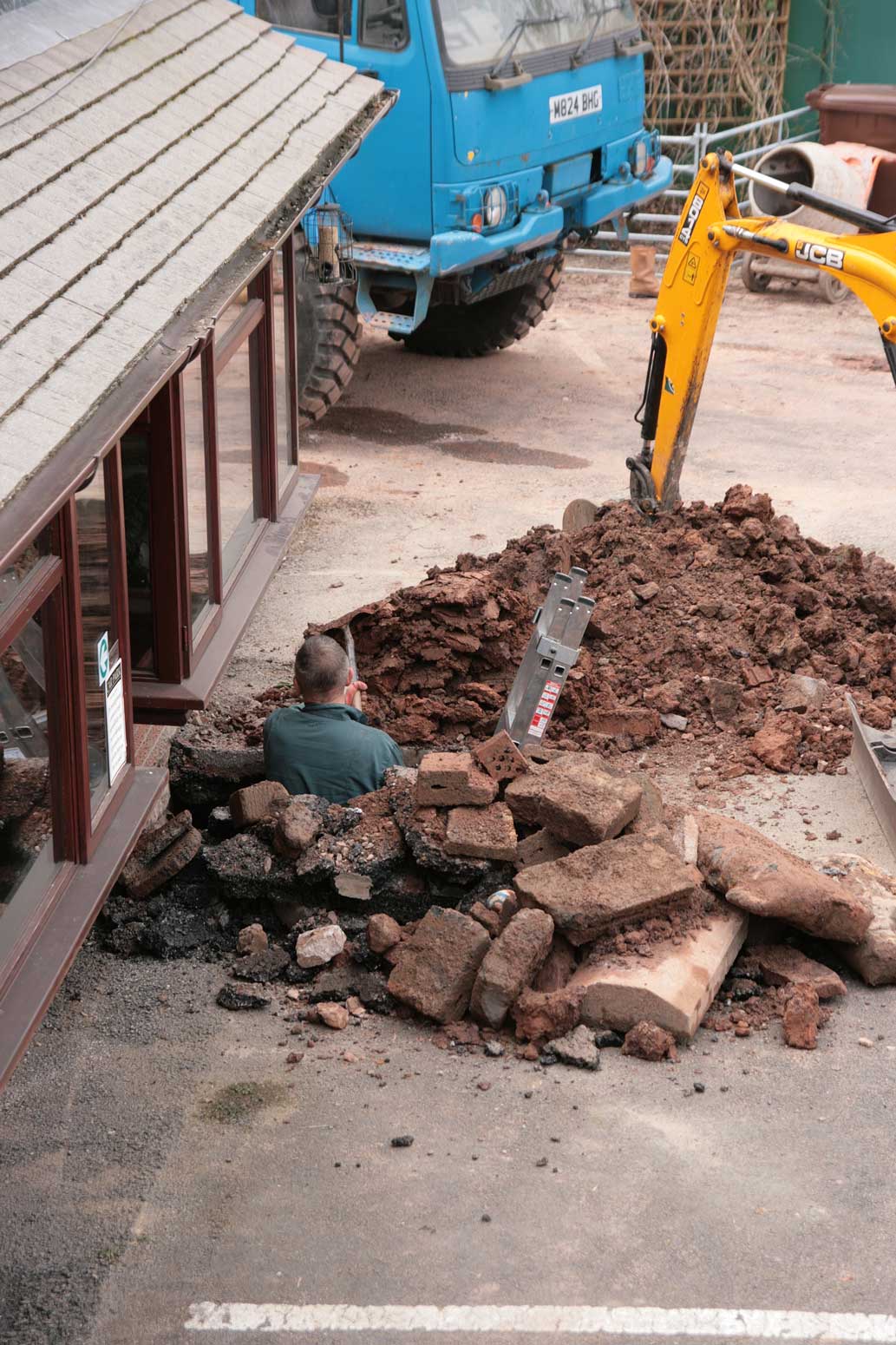 A mini JCB and another man in boots from Wales (the man, not his boots), were deployed to uncover the hidden foundations.
After digging out a large amount of ‘builder’s rubble’ (AKA the rubbish they usually bury in your garden) we had a couple of huge coping stones and two full bags of cement, buried since the 1980s.
It was then down to the JCB to get through another 5ft of quality potter’s clay until the foundations and the subsoil was finally uncovered.

According to the boffins, the fact that the foundations were built on blue marl is a good thing. Blue marl is not, as you may think, a large-finned fish famous for it’s fighting spirit, but very hard clay – As close to proper rock as you get round here. 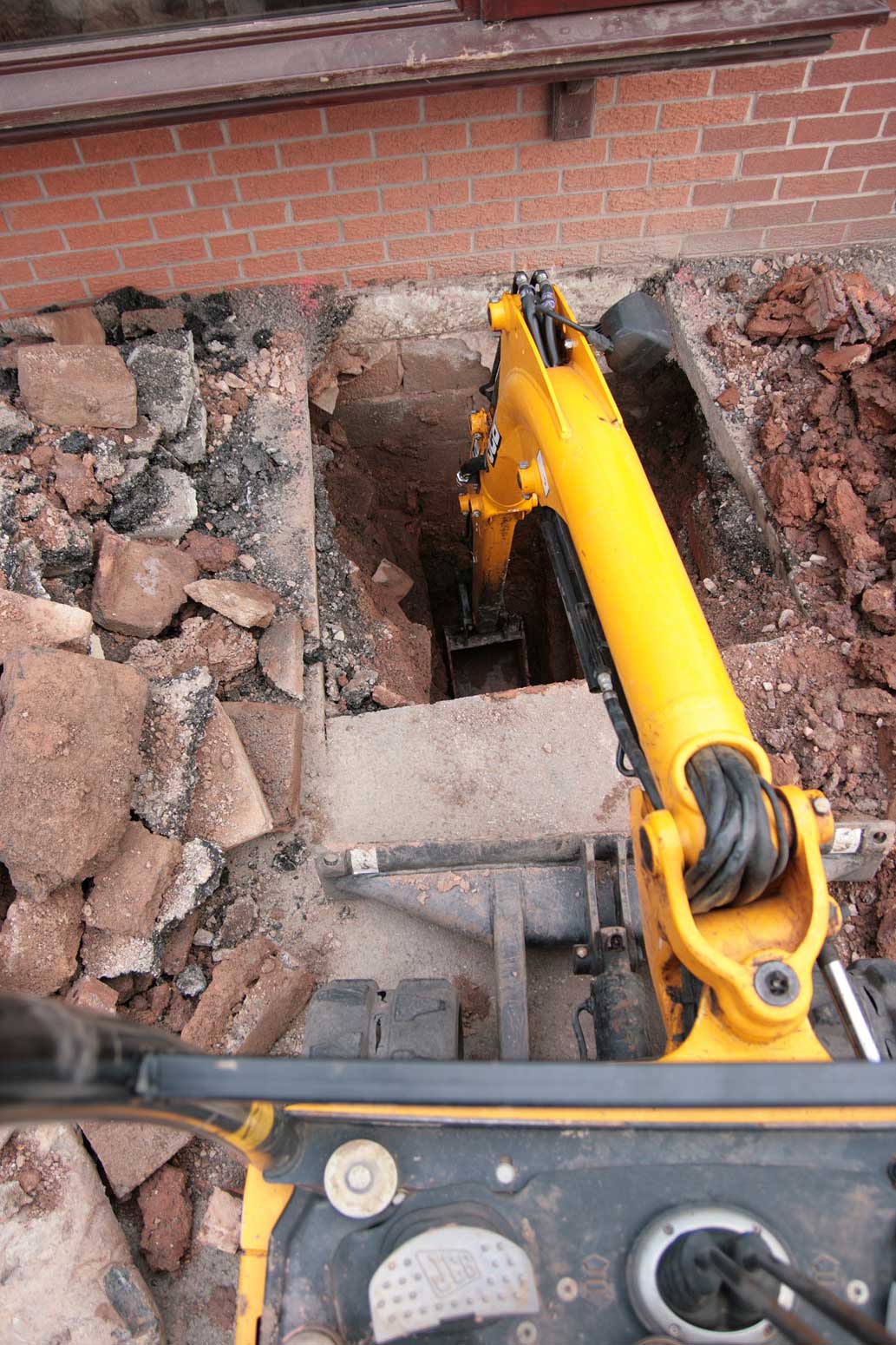 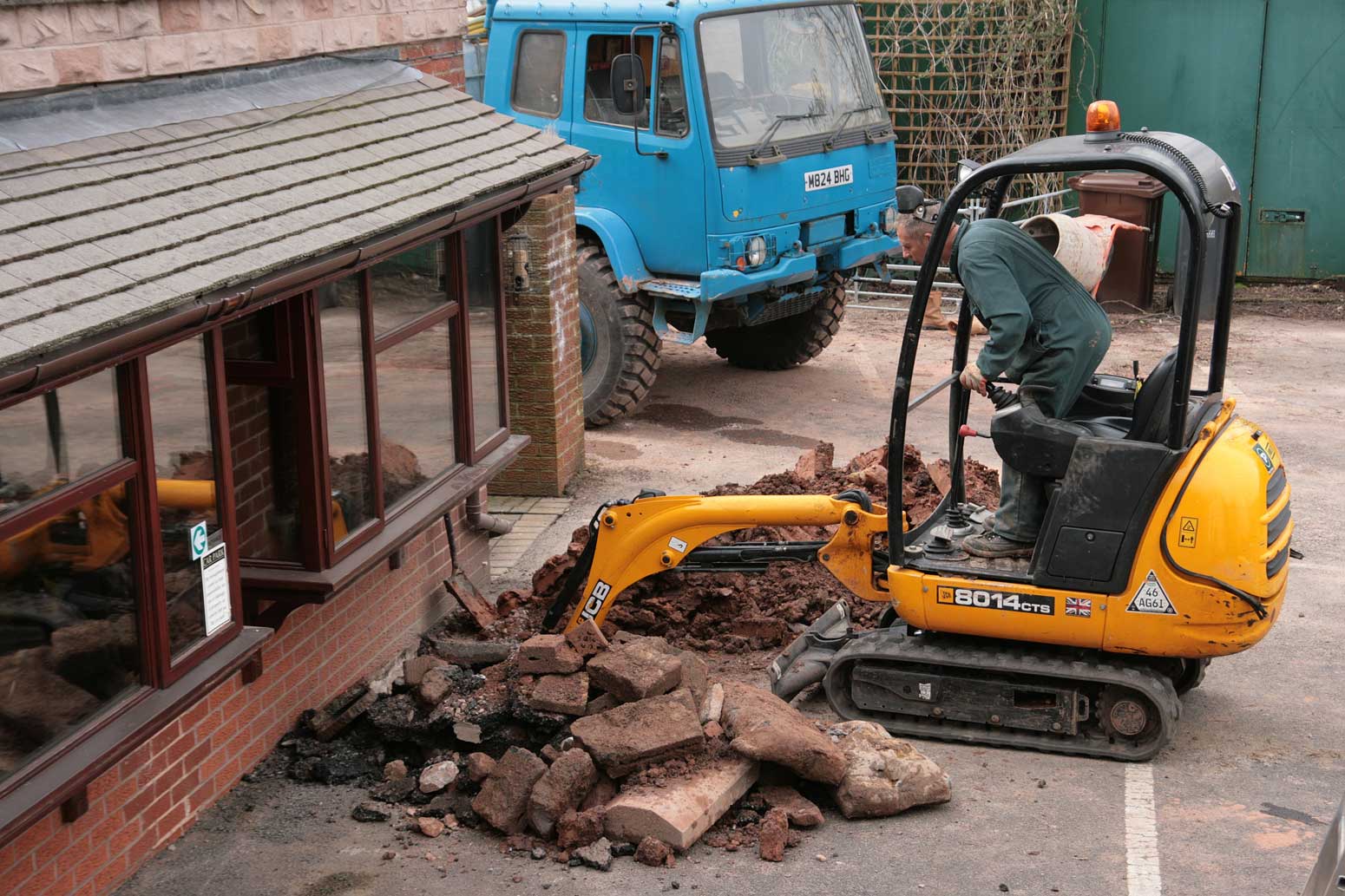 You can see from the video below that I even had to lend the man in boots my ladder so he could get into and out of the hole.

The other, large blue rig, has been dispatched to further investigate our soil anomaly near to the greenhouse. This suspected marl pit has been having the boffins scratching their heads for a few days now. Either that or they’ve got nits from somewhere.
As a result, they’ve continued to try and establish how far the soft area extends by boring another load of holes.

Somewhat worryingly, one of the boreholes dug today went down to 122 ft before hitting something hard.
The young boffin I spoke to today confirmed that he was a little perplexed by this. Hardly surprising really as, despite having lots of letters after his name, he looks like he’s just out of short trousers.

One piece of good news today. When recording how far things had moved on the visual monitoring devices, the engineers installed for our peace of mind, it seems the land movement has slowed down a bit.