We had two guys round from Scottish TV today.
Perhaps, in an effort to make us feel more comfortable, they had decided to adopt a very convincing Home Counties accent.
‘Posh Will’ and ‘Not So Posh Nathan’ arrived early afternoon to do some filming for a Channel 5 documentary.

Somewhat like the ‘reality’ TV documentary The Osbournes, we were filmed taking part in everyday life – such as eating lunch with Helen’s parents. Unlike The Osbournes however, there was far less swearing and hardly any drug-taking, as we tucked into quiche and salad.
It’s quite surprising how quickly you get used to being filmed doing normal things, but initially just scooping up a piece of quiche with my fork, without looking like I hadn’t been fed for a month, was a bit tricky.

When I was a shy little 8 year old, we used to have our school dinners in the school hall. On the raised stage at the front, the headmaster and various intimidating members of staff would sit and gaze upon the collection of inept diners in front of them. Should one of us dare to pick up some peas with anything other than the back of our fork, a voice would bellow from the stage – “It’s not a shovel boy! – It’s a fork!”
With this in mind, I hate to think about what hideous eating habits the final TV cut will reveal.

Soon enough we moved on from the quiche ordeal and concentrated on all things slippy slidey. This was more in our comfort zone, so suitably miked-up we faced the camera and the probing questions from Posh Will about how, why, when and what had happened.
I’ve (almost) got some sympathy for Gordon Brown now as, whilst Helen and I were whispering some ‘off-camera’ comments to each other, our radio mikes were transmitting everything into Not So Posh Nathan’s headphones. Ooops! Apparently he’s even had the pleasure of listening to various miked-up punters visiting the loo….

After the pleasure of watching us acting as naturally as Arnie Schwarzenegger, Not So Posh Nathan started taking closeups of the damage to our drive and surrounding area.

Once outdoor filming activities were concluded, we moved on from the bucolic* surroundings of The Laurels to our freshly decorated interior.

*Those of you with a proper education (and other irritating know-it-alls) will already know that bucolic means “the pleasant aspects of the countryside and country life“.
As I’m only a bear of small brain, I wasn’t aware of this new word until today, but it perfectly sums up where we live, so I’ll be using it again.

Inside, we proudly showed off our rooms and allowed Not So Posh to film our four poster room, which he instantly decided would be a lovely place to bring his girlfriend later in the year. Clearly a man of taste.

Once all these 3 hours of movie madness is edited down into a 30 nanosecond clip, we’re due to appear on Channel 5 in August sometime.
Watch this space! 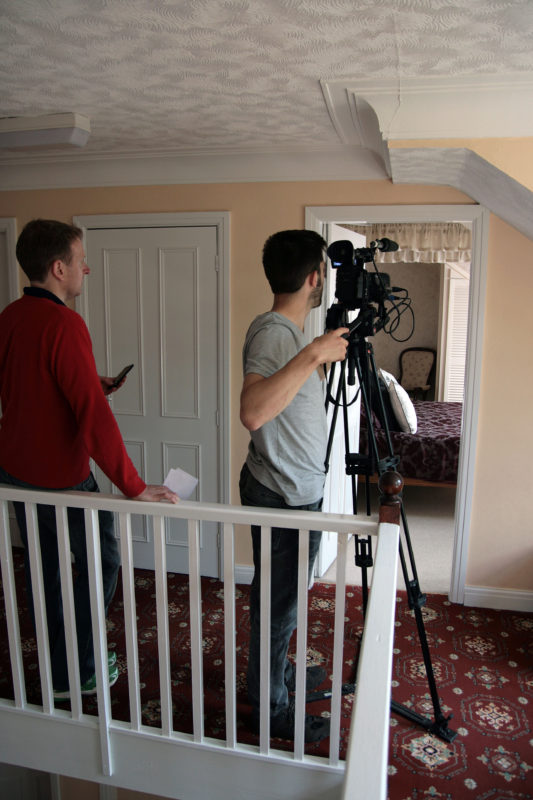 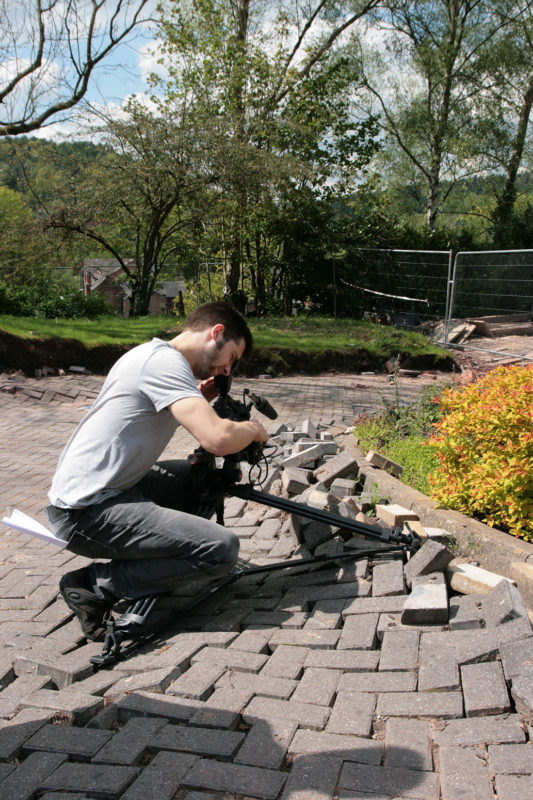