Blowing The Cobwebs Away in Staffordshire

Today we decided to go for a good walk, to blow away the cobwebs and try to forget about all things slidy, slidy and holey holey 🙂
This was partially successful, in that we walked 6 miles in all, but unsuccessful in that our accountant rang us to talk about VAT and insurance claims as we wandered down the Churnet Way.

As a reward for walking halfway, we popped into the Denstone Farm Shop for tea and cake. Having munched our way through a large portion of coffee and walnut cake we decided to take a different way back, over the top of the hill, rather than through the valley.
This proved to be a great idea, right up to the point where we (under my expert guidance) walked the wrong side of a hedge.  This wouldn’t normally prove to be a problem, except we ended up walking along a path that had clearly been made by cows repeatedly going to the milking shed.
Say what you like about cows, but one thing they ain’t is clean. Having tiptoed our way through a mixture of mud, water and cow pats we came to a dead end. This left us with two options – go back through Squelch City, or divert to the adjacent (correct) path over a fallen tree. 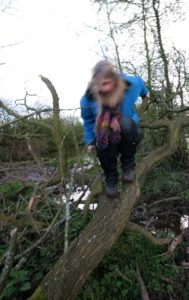 Guess which one we chose.

As I was feeling in a black and white mood today, here’s a bit of the lovely countryside we walked through, just half a mile from the madness of Alton Towers 🙂 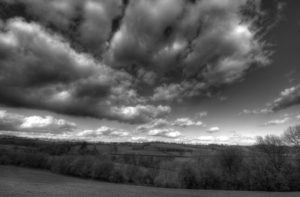 April 10th 2014
The carpark resembled well, a carpark today, with the boring men, one of the original boffins and two new ones, both called Steve who apparently excel in hole filling, turned up early.

We’re told the plan to inject the concrete gloop into the hole will commence after Easter. It can’t come soon enough, as far as we’re concerned. One less thing to worry about.

I’m sure in several thousand years time, the archaeological experts of the time will discover this massive concrete and rock column and wonder what the hell it was there for.
No doubt they’ll postulate that, as the column aligns with Mercury, Uranus and the Sun during one day in April, the ancients (that’s us) used to worship at this altar to pay thanks for the arrival of Spring. Either that or they’ll go “Bloody hell, that must have been a big hole!”

In the meantime, everything else is still on the move 🙁

In case you’re wondering what the horizontal straps on the wall are for. They’re to give us a quick and easy indication of how far things have moved. Given that it’s moved another 13 mm in the last week, we’re hoping rather a lot of concrete turns up pretty sharpish.