Cycling Near The Roaches in Staffordshire

Most of our cycling routes are easily manageable, but this one is a bit more extreme. Suited mostly to those nutters that can cycle up 40 degree muddy slopes and down hills at serious speed. 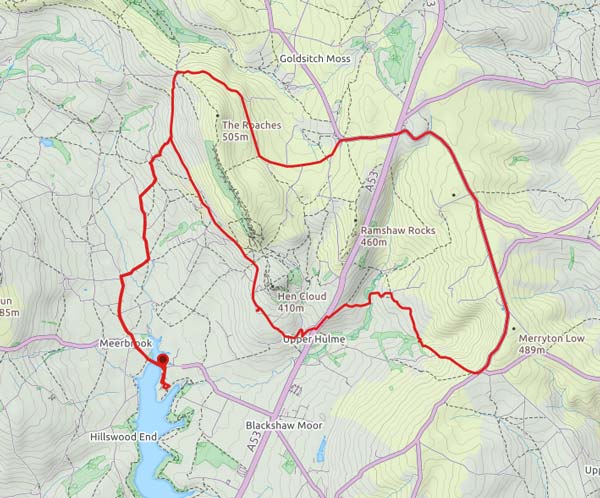 As per the ViewRanger map above, we parked at the Tittesworth Reservoir. This has the benefit of toilets and food, so it’s essentially perfect. You will need to pay for the privilege of parking, but the machines do take credit cards as well as cash.

The first place you come to is a rather lovely pub called The Lazy Trout. The food is great and the garden has a lovely view. Given that it will only take 2 minutes to cycle here you may want to wait until your return before you sample the delights on offer, as you don’t want to be tackling the next bit on a full stomach.

Once you’ve climbed the ascent to the base of The Roaches you’ll be treated to the first of a number of fabulous views, including that of the reservoir where you parked.

The first of your long, hairy descents begin just after The Roaches Tea Rooms, which you may now want to visit for a bite to eat first. I had the ham and cheese omelette, with obligatory chips, which filled me up a goodun, as there was probably half a ham in there. Helen had an equally scrummy, but more modest, tuna salad. 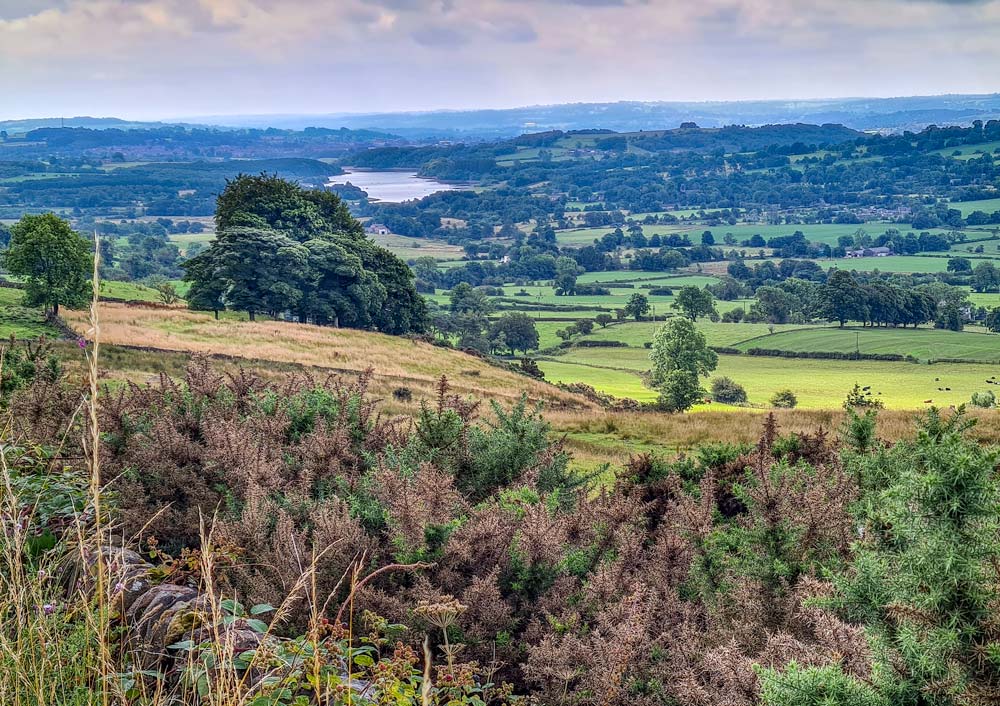 On your descent into Upper Hulme you pass a small industrial unit, whose doors open straight onto the road. It’s a good idea to make sure you keep an eye out for any workers who need to go from one side of the unit to the other, as that means appearing out of one of the doors immediately in front of you, to which I can attest is likely to make you grab for the brakes!.

Once you’ve slogged your way up a very short bit of the A53, comes the interesting bit. There’s a lovely drop into the valley on a stony track, with grass growing up the middle, before you climb again towards a farm. You do literally ride right through the middle of the farm yard, surrounded by cows, machinery, and when we were there, the farmer. He seems very friendly, and quite used to nutters cycling through the 4-inch deep slurry that covers everything. If you haven’t got mudguards, be prepared to get very, very dirty.

Although the next bit is marked on the map, you would be hard-pressed to find any kind of route. You essentially follow ViewRanger through the middle of a large field full of very thick, 4ft high sedge grass. We found it impossible to ride through this stuff, even though you’re going steeply downhill. It just stops you dead. I suppose you could try attacking it at high speed, but I suspect you’ll end up going over the handlebars at some point as the grass drags you to a sudden stop. 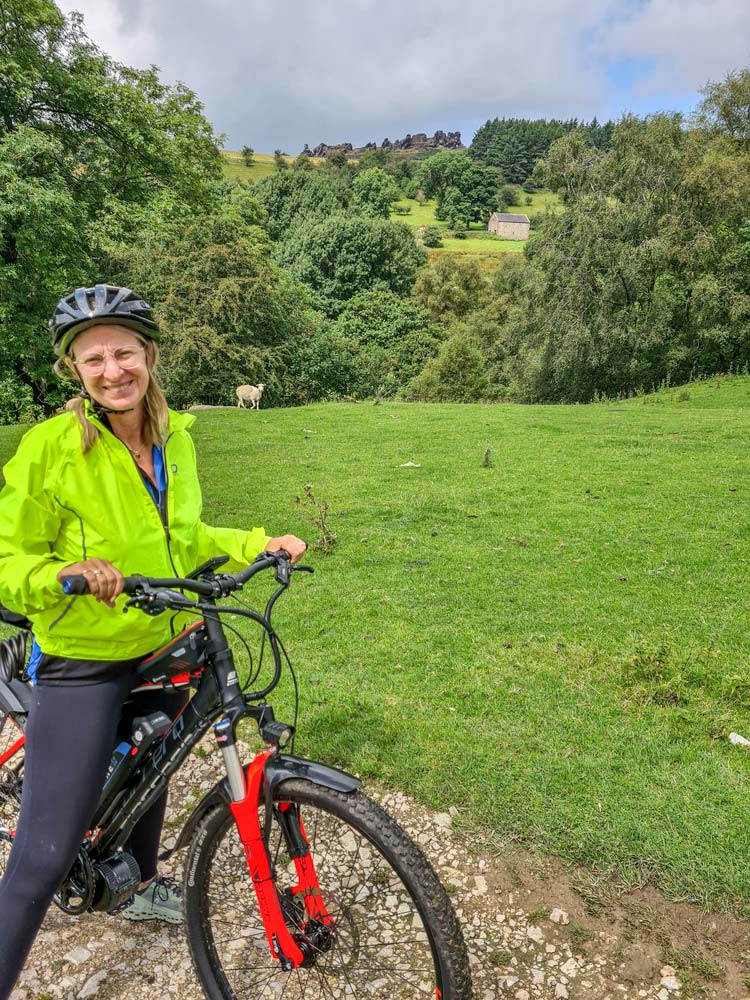 As you plunge further into the bottom of the valley towards Big Wood (I kid you not), beware of a hidden drop onto the track you’re about to follow. This leads to an almost distinguishable track that crosses a stream then heads immediately skywards. Again, if you can ride up there (even with an ebike) you’re a better man than me Gungadin.
If you look at the photo above, you can see the trees just behind the sheep. That’s a good 30 or 40 meters climb to where Helen is now.

Eventually, the path across the fields becomes less vertical, to the point where you may actually be able to ride your bike, in which case you head towards The Mermaid inn at the top of the hill. 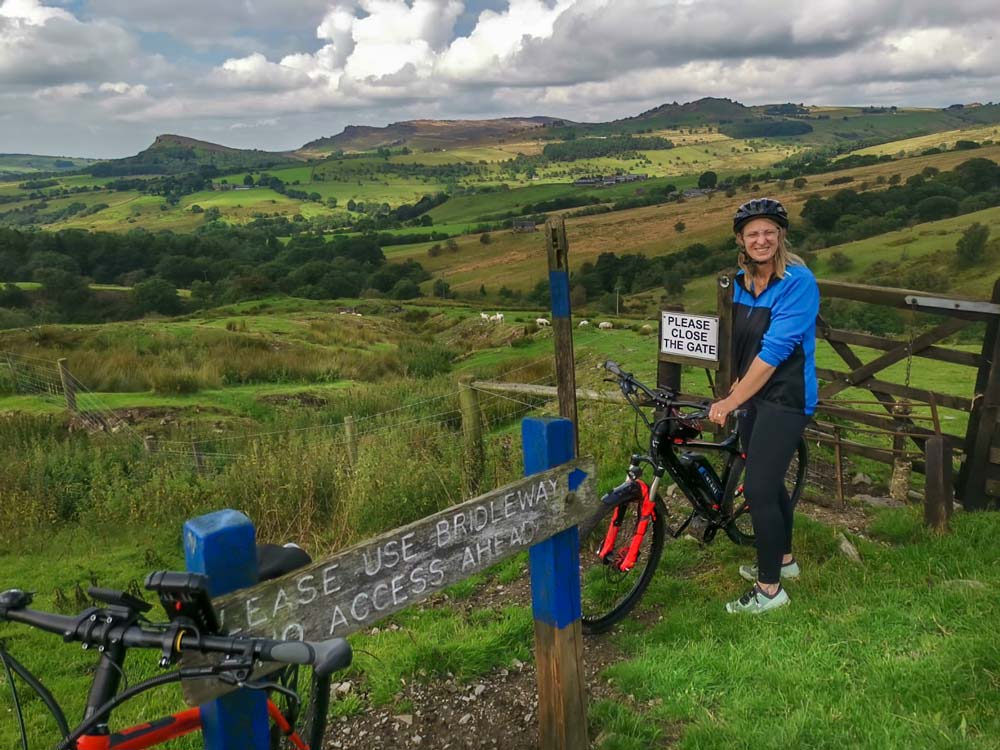 The beauty of this ride now becomes apparent. After being covered in mud, and slogging your way up some pretty serious stuff, you now get to enjoy the amazing views to the east and the west, as far as the eye can see. Even better, once you’ve returned to The Roaches, from the opposite side, it’s pretty much downhill all the way, and some of the downhills are as fast as you dare.