Those of you with a penchant for rubbish TV like us, may well have enjoyed the final of Strictly. Whilst the anointment of Jay as the winner may have come as a surprise, not least to him, you can’t deny his excellent technique. More importantly it was somewhat more uplifting to watch than the likes of Eastenders, where the annual screech of “Get outta ma pub!!” by some alcohol infused harpy is starting to grate.

On the subject of alcohol, but not harpys, we recently enjoyed the fruits of our labour. Back in September we harvested a whole load of berries from some adjacent hedges, with which to create some Sloe Gin. We now have great pleasure in announcing that a large number of berries, a bottle of cheapo gin, some sugar and a few months in a dark cupboard produces a really very nice liqueur-like tipple. The only trouble is, it really doesn’t appear as if it’s going to last too long.

Meanwhile, the MIB2s have finished the stabilisation of our rear bank and wall. Six weeks of removing stuff, then putting different stuff back has resulted in the following. Going from this … 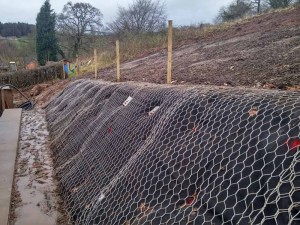 Luckily we’d already purchased a whole load of climbers from our local garden nursery to plant at the bottom of the bank, which will turn this black and zinc galvanised eyesore into a green and flowery wildlife haven.

The original MIBs will be back up here in the first week of January, after their obligatory 2 week Yuletide holiday. Hopefully they won’t be too full up with turkey and Christmas dinner to replace kerbs, gardens, walls and carpark etc.

The main hurdle we have for 2016 is for us is to secure full insurance, enabling us to reopen in The Spring. Hopefully we’ll have all the necessary bits of paper from the designer which will convince the powers to be that we’re a realistic risk.

The End Of The Bund Is Nigh

It’s said that as you get older, time seems to pass more quickly.
We’d currently have to take issue with that, as time seems to have decided to stand still for the last 4 weeks.
The MIB2s have been removing large amounts of rock from behind The Laurels, which they’re now replacing with large amounts of a different kind of rock. The difference of course being that the new rock has been specified by a qualified Engineer, whilst the original rock was only deposited there some ten thousand years ago during the Holocene Geological Period and therefore clearly isn’t to be trusted.


Meanwhile, the original MIBs have been carrying on with the endless task of constructing the earth bund below our boundary, which is above the area originally excavated by the Idiot Builders some two years ago.
We’ve lost count of the number of 8 wheeled lorries depositing stone there, but given that they carry around 20 tons a go, there must now be getting on for a thousand tons of stony, gravelly stuff compacted into a very technical lump. 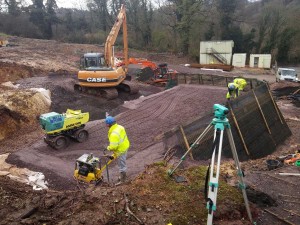 The photo above shows one corner of the proposed L shaped bund. There’s about 2.5 metres of this below ground level and currently around 5 metres above ground. This will increase to about 6 metres before it’s finished, with every metre being compacted within a inch of its life by various bits of kit.
The green and yellow vibrating bit of kit is so vibratey that, when standing where this photo was taken, you can feel the earth moving below your feet.  Imagine the scene in Jurassic Park where the T-Rex stomps towards the person with the cup of coffee – producing little ripples across its surface, and you’ll get the picture. 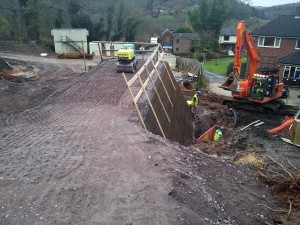 The photo above shows the size of the bund, with a couple of the MIBs included to give it some scale. Given that the Idiot Builders will still be able to build their two new houses at the bottom of this eyesore, it makes us wonder who’s going to mow the grass at the top. Answers on a postcard.

Whilst all this has been going on, Mother Nature has also decided to deposit a large amount of rain on us, just to prove who’s really in charge round here. The nice pool of milk chocolate coloured mud (below) is an illustration of the gloop that currently surrounds the entire property, meaning that any venture outside now requires wellies to be worn. 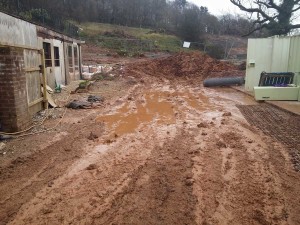 It’s got to be 40 years since I last had a wellie boot get stuck in the mud, to such an extent that it was nearly left behind, but that’s what happened the other day as I trudged around what used to be called our garden. Ho Hum.