Little kiosks located in popular car parks have a lot to answer for.
Today we decided to visit the Derwent Reservoir. So we parked up in a surprisingly busy car park, donated the equivalent of half Botswana’s GDP to the ever-present ‘pay and display’ machine and went in search of a cup of tea and a slice of cake.

As we were in Derbyshire, we decided the local speciality – Bakewell Tart would be appropriate. Unfortunately, I fear this particular cellophane-wrapped slice of Derbyshire was actually manufactured in China, sometime in the last decade. It had as much resemblance to a proper Bakewell Tart as Dick Van Dyke did to a cockney accent.
Still, it gave us something to feed the ducks with. Which was somewhat ironic, as the kiosk was also selling bags of duck food at less than half the price of the 贝克韦尔挞 (Bakewell Tart) we’d just bought. 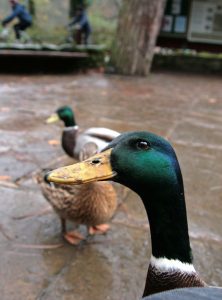 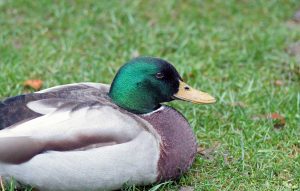 As we sauntered past the dam, we tried to imagine what it might have looked and sounded like in the 40s. We could just imagine 617 Squadron, flying past at 250 mph just feet above the water, whilst they practised right here.

The idea of creating a bomb that ‘bounced’, was dreamt up by Barnes Wallis, which I’m sure most of us know. What I didn’t appreciate was the sheer size of the bomb they were expecting to bounce. This barrel-shaped device was 1.5 Meters across and weighed over 4,000 kg when filled with explosive. I bet that made the Lancaster bomber lurch a bit when they let it go. Mind you, probably not half as much as The Möhne Dam did when they dropped it.

The reservoirs behind the various dams, along the Derwent Valley, are all pretty low today, due to the lack of rainfall we’ve had this Summer. Given the Met Office are forecasting the wettest Winter for 30 years, that should be cured in a couple of months time though. However, as last Winter was supposed to be the wettest for 50 years, I’m a bit confused. I know The Met Office guesses (I mean forecast) can be a bit iffy, but they can’t both be true.

As we’d only taken out a small overdraft in the car park, we didn’t have time to walk all the way around the reservoir so decided, once we’d reached the view of The Howden Dam, we’d turn around and retrace our steps. 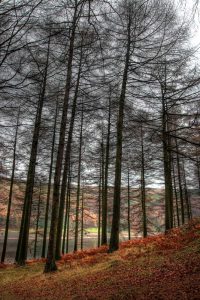 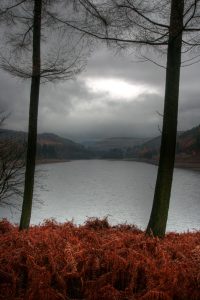 As the weather was somewhat overcast today, it seemed a good opportunity to take some black and white photos too. Some of which are included below for your delectation. 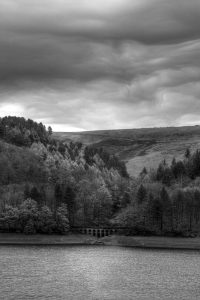 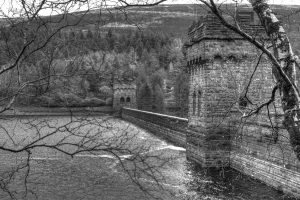 On our drive home, we took a detour up the very picturesque Snake Pass and popped into a pub for a late lunch.
Given our earlier Bakewell disappointment, we were hoping for something really nice to eat. As luck would have it, the Food Fairies weren’t looking after us today, as the ‘chef’ (or Microwave Operator as we call them) clearly thought the only way to make a chicken curry was to chuck curry powder and chillies onto some diced up bird.
Oh well, you can’t get lucky every time you go out.

← Places to Visit in and Around Staffordshire ← Alton Towers Scarefest