Drone Footage of The Roaches

Given that absolutely nothing is happening at The Laurels, in respect of fixing things that is, and that the weather was dry and warmish, we decided to take a trip to The Roaches.
This isn’t, as you may suspect, some hideous place where six-legged insects inhabit the earth, but a rocky, gritstone escarpment just to the north of the historic town of Leek.

Oddly, it’s said that cockroaches would take over the world in the event of a nuclear holocaust. This, in fact, isn’t quite true. Whilst they can survive a radiation dose of around 10,000 rads (way more than humans), they can’t survive much more than that.

Given that the Americans’ drop on the unfortunate inhabitants of Hiroshima delivered around the same level, it would be impossible for them to survive a modern nuclear strike, which delivers a radiation dose many times in excess of this.
In fact, it’s the Deinococcus Radiodurans bacteria you need to be worried about. Apparently they’ve survived as much as 500,000 rads! Probably just as well they haven’t got lots of legs or an appetite for scaring humans like cockroaches!

Having said that, the CIA apparently investigated using them as a method of storing sensitive information, in the event of a nuclear holocaust. The mind boggles.

Anyway, back to The Roaches.
The idea was to take my new flying toy and take some video of this splendid bit of our local countryside. 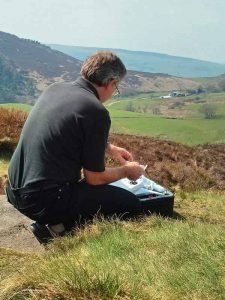 Of course, we had to visit The Roaches Tea Rooms first to top up with tea and cake. You can’t be expected to do these things on an empty stomach!
Despite the fact that it was very windy and the drone was bouncing around all over the place, the 3 axis gimbal and associated computerised wizardry managed to keep everything smooth and level.