Overpaid, Oversexed and Over Here!

Apparently, during WWII this is how we referred to our friends from over the pond when they arrived to help us win the war (allegedly). Although their apparent retort about us being “underpaid, undersexed and under Eisenhower” is probably a lot more accurate!
Whilst we can’t comment on the financial fluidity or the sex life of our American guests Ryan and Chynna, we can confidently report that not all young Americans are parochial, burger-eating airheads, intent on voting in Kanye West as President in 2020.
Our visitors from the US of A had visited pretty much all of Europe in the last fours months, something which had only served to broaden their horizons more than most.

We feel really lucky to have spent so much of the three weeks they were with us discussing things over dinner, ranging from trashy TV, our worst and favourite films, jobs, personalities, religion and world events. The icing on the cake is their ability to also carry out a huge amount of work for us, including large amounts of painting, a fair amount of digging, some humping and dumping and a small amount of floor laying – probably the only bit they really didn’t excel at or enjoy.
We were genuinely sad to see them go today.

Before they disappeared on their way to Ireland this morning, we’d had the chance to swap a number of cultural experiences. It seemed only fair, given we’d introduced them to the joys of a proper English Pub, that they should give us the opportunity to enjoy a true American institution – The Super Bowl!
I was quite a fan of this girlie version of rugby in the 80s, but that was mainly due to Channel 4 only showing the highlights, thanks to the fact that a game supposed to consist of 60 minutes of play, actually takes around 3 hours to complete. It was with a little trepidation then, that we agreed to watch at least the first quarter of the match, which didn’t actually start until somewhere around midnight.
Rather a large amount of beer, dips & chips (that’s crisps to you and me) whooping, hollering and high-fiving later we staggered into bed at around 3:30 am. having enjoyed a brilliant game.

Cultural exchanges number 3 and 4 consisted of us introducing Ryan and Chynna to the delights of a Full English Breakfast and a traditional Sunday roast, something they’d never experienced before, especially to the delights of brown sauce on sausages, Marmite on toast (which elicited much face-pulling) and horseradish sauce with one’s roast beef.
To prove a point, our two guests then decided to make us some homemade pizzas. We’re not talking about buying a ready-made base from Morrisons then bunging a bit of ham and pineapple on top, but everything from the base up, crafted from scratch. 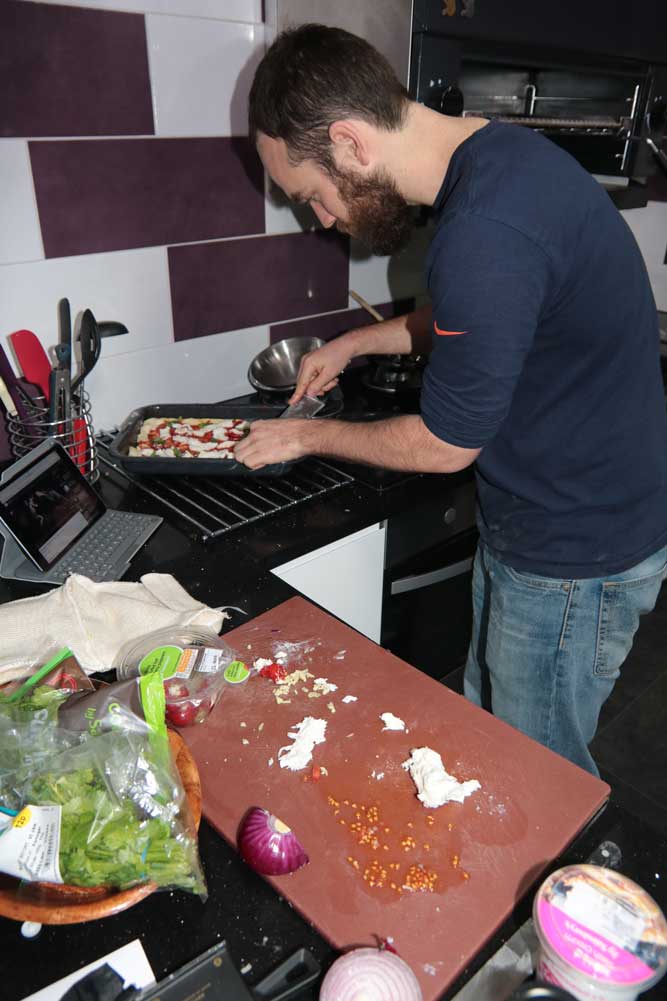 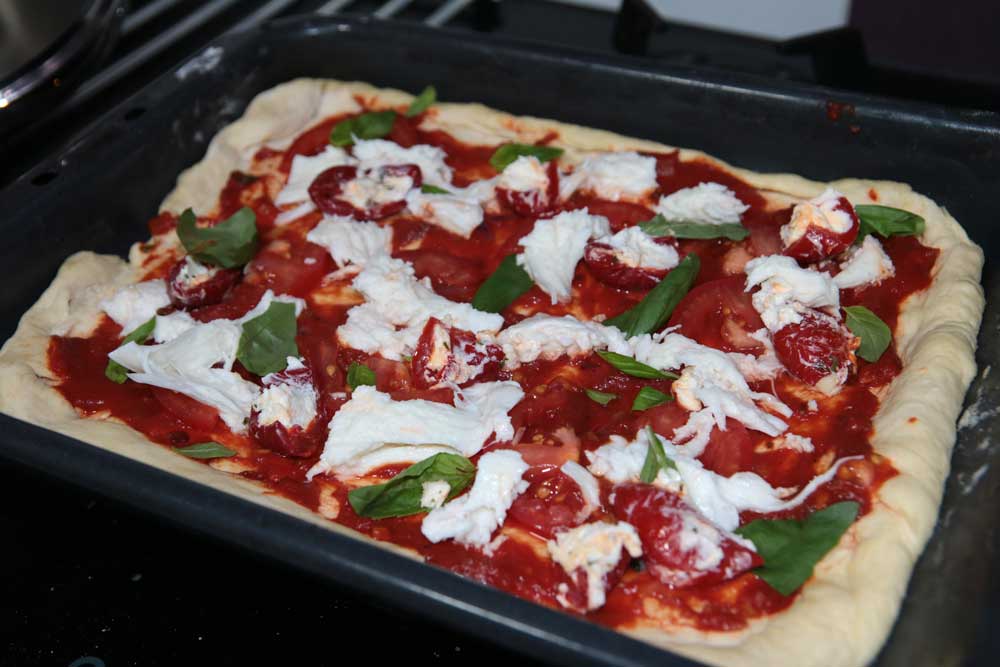 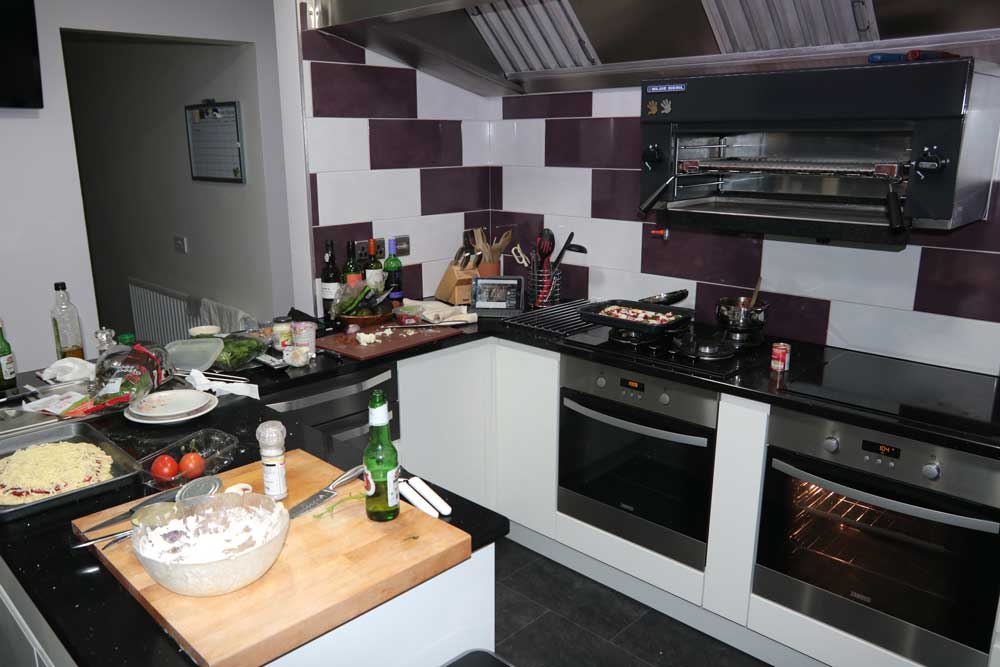 As you can see above, making pizza requires a large number of ingredients – the most important of these being wine, beer and olive oil.

One of the last things on our ‘quintessentially English’ experience, was to take the two of them for a proper afternoon tea.
Luckily we have The Cottage Kitchen Country Cafe just down the road who are able to provide the real deal, complete with posh china, proper tea with a tea strainer, multilevel sandwich display (with the crusts cut off, of course) and lots of yummy cakes on the top tier. Given that the sandwich/cake stand was the subject of one of Ryan’s photos proves it was a real success.

Whilst all this exchanging of culture and good old fashioned hard work was going on, our MIBs were starting to turn our drive and garden from something less resembling The Somme on a particularly wet day, into something more resembling a B&B.
The first of the transformations started with the construction of our garage and workshop bases involving, you guessed it, another few tonnes of steel and concrete.

Following that, the installation of the kerbs for our drive, plus the continuation of the bund construction, which is due for completion in the next couple of weeks. 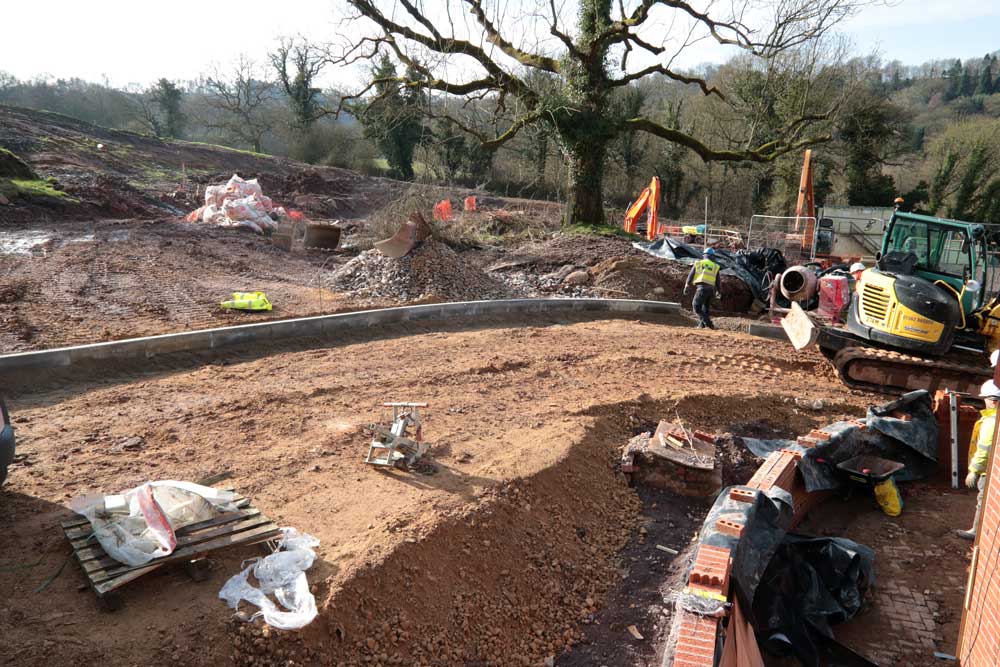 In the vein of cultural exchange, it seems our MIBs have also picked up the Transatlantic baton.
In the video below you can enjoy our Head MIB doing a passable impression of Al Jolson singing his iconic ‘My Mammy’ number, although he does appear to have put off the poor bloke in the digger, causing him to spill his concrete.
Enjoy!

The first of our competitions is now over.
In case you missed it, you can see the details here, but essentially the idea was to identify what the item was in the photograph and tell us what it’s normally used for.

To put you out of your misery, the offending item is called a ‘pig’. This little piggy has the pleasure of being inserted into the concrete feed pipe of the Soilmec SR30 Piling Rig. After the concrete pumping has been completed the piggy is fired through, under air pressure to cleanse the whole system of unused concrete. Obvious really!
Well, obvious to Mr Simon Laughton anyway, who correctly guessed the use of our little sponge ball.
Simon wins a free night in our Superior Double Room.

We’ll be announcing the details of our next competition very soon, but here are some of the prizes we have lined up;

To win one of these, all you have to do is book a stay with us during the promotion month and you’ll be automatically entered.
Yes, I know, we’re just too good to you!

Meanwhile, our MIBs have been beavering building and repairing rather than demolishing and stabilising.
This sudden change in approach means we now have the beginnings of a garage base and a new crib wall.
In case you’re wondering a crib wall isn’t made of old, discarded cots, but is in fact a wall constructed of wood and stone. Oh yes, very high tech. Anyway, ours will be a super-deluxe crib wall, as we’ll be able to plant stuff in it, which should make it rather pleasing on the eye, rather than just have a bunch of wood and stone to look at. 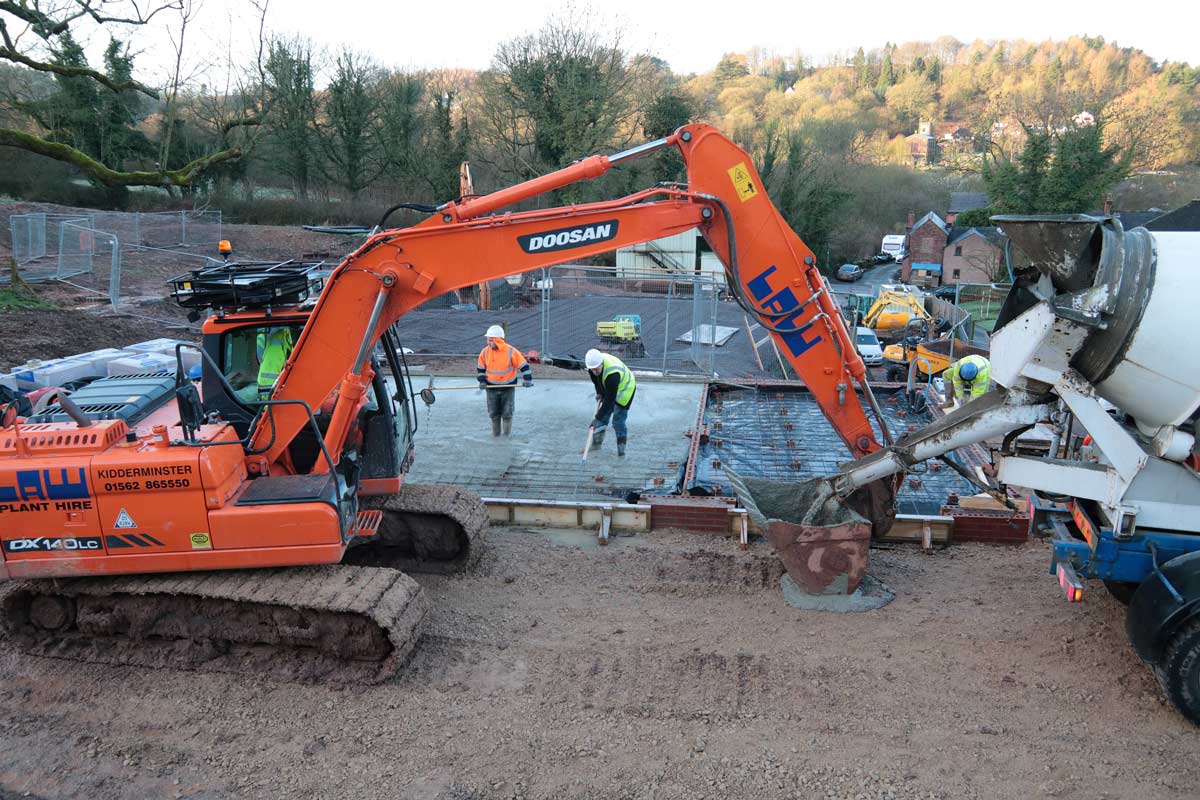 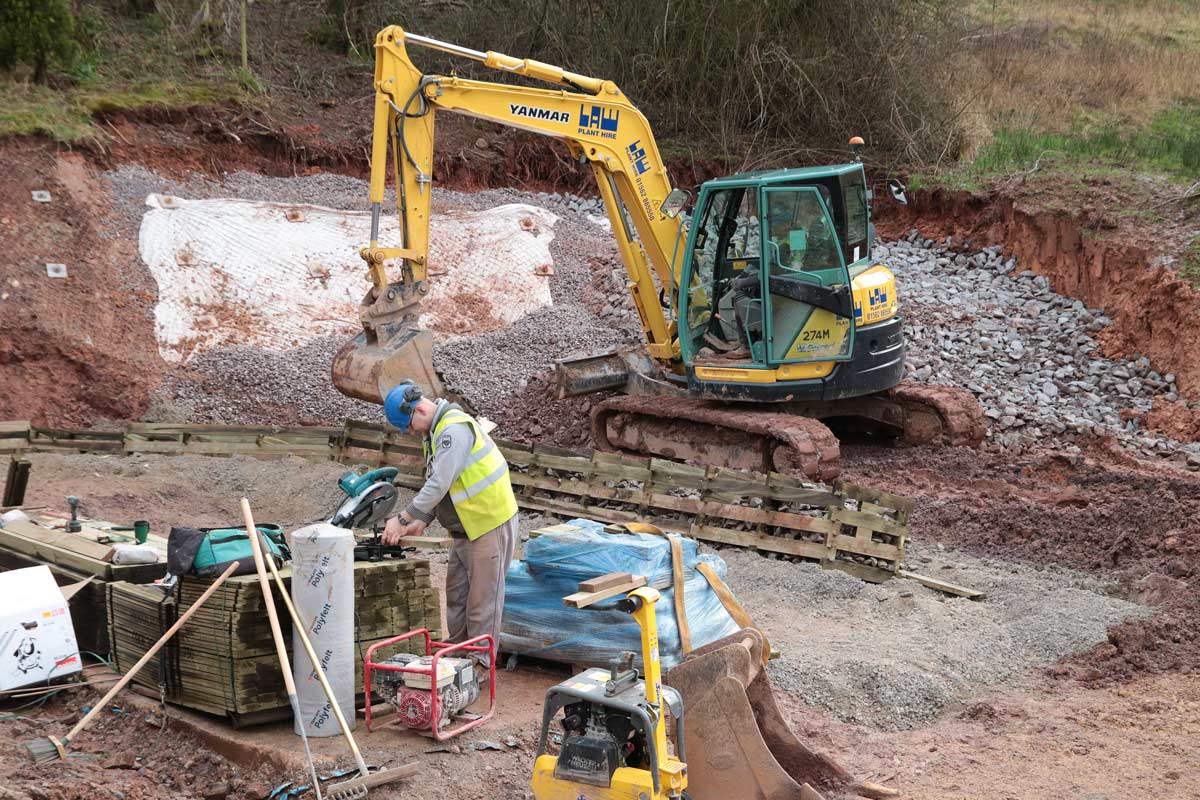 Meanwhile, our friends from the other side of the Pond, Chynna and Ryan have been going great guns with decorating our guest dining room so, as a reward we decided to drive them around half of Staffordshire and Derbyshire and show them how lovely our countryside is. They were good enough to comment on how green it is but, as we chose one of the wettest days of the year (and let’s face it, that takes some doing in 2016) the amazing views across the valleys left a lot to the imagination – mainly because we were in cloud half the time.
Still, there are benefits to going out in the rain. One – you have to visit a pub to warm up/dry out and two, the rivers look spectacular in full flow. You can admire both one and two in the photos below. 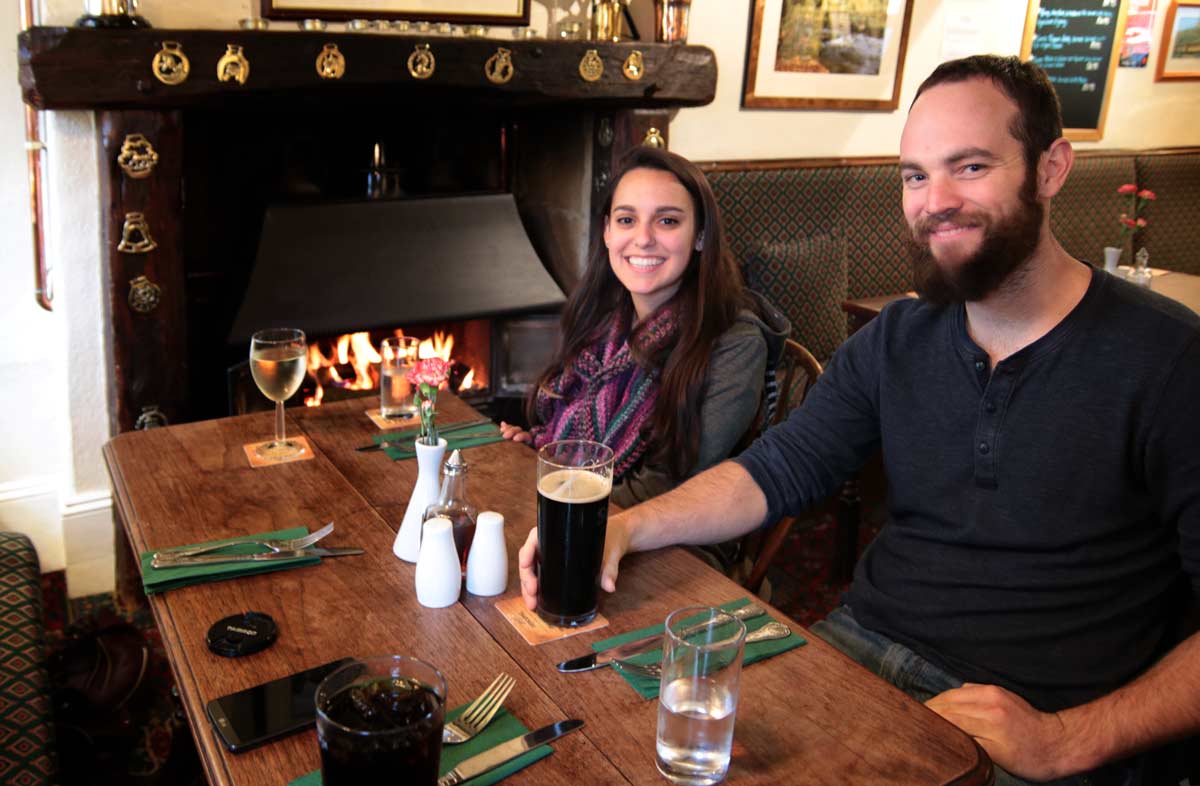 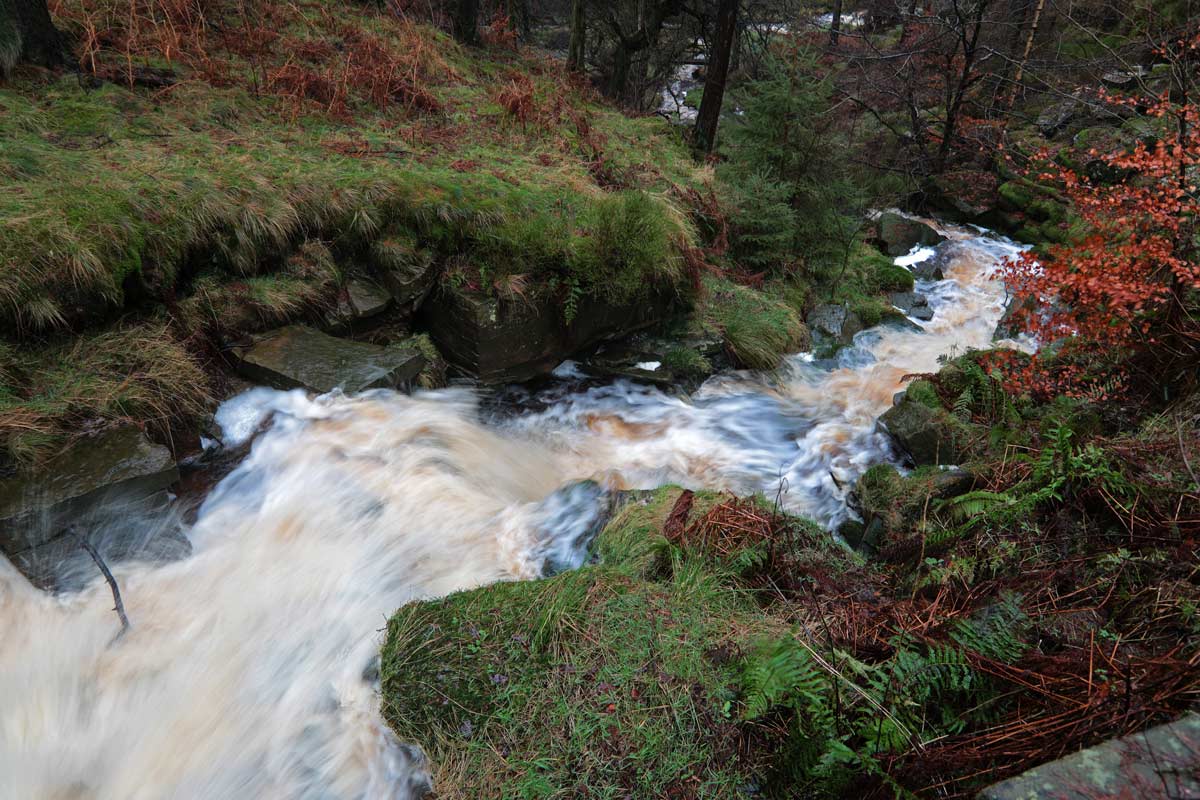 Obviously we were keen to give the impression to our transatlantic visitors that all pubs have open fires and wooden beams, so took them to the excellent Manifold Inn, where such things exist in real life and have not been added just for the tourists.

Coming soon – what happens when you exchange traditional dishes with folks from the US of A.