We’re Back In Business!

The arrival of our shiny new credit card machine means we’ve now opened up our booking calendar from 1st June 2016 onwards – Yippee 🙂
To celebrate this momentous occasion, we’re giving away a FREE, yes a FREE stay at The Laurels in our Superior Double Room. 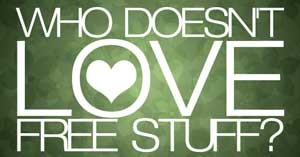 “OK, what’s the catch?” we hear you ask.
Well, all you have to do is correctly answer a reasonably difficult question. In fact, as we’re worried it may be a little too difficult, if no one gets it exactly right, we’ll give the prize to the nearest answer. You can’t say fairer than that!

So here it is. The fiendishly difficult question.
Using your skill and judgement (or just a plain lucky guess) tell us what the item is in the photo below and what it’s used for. 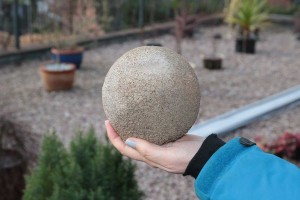 If you think it will help, just click on the image to enlarge it.
To enter the competition, just email us your answer to info@thelaurels.co.uk

All email entries must be received by us before 17:00 on Friday 5th February 2016.
The lucky winner’s name will be pulled from the pot by an independent adjudicator (also known as some random person we happen to run into) on Monday 8th February and will be notified via email.

In a prelude to reopening, we’ve welcomed a couple of willing volunteers into the fold to help out with our preparations.
Ryan and Chynna, a charming couple from Colorado in the US of A, arrived from Scotland, where they’d been staying, but left due to it raining all the time. Normally we’d have suggested this was akin to being surprised that Dubai was so hot in August, but to be fair it’s been seriously wet this Winter, even for Scotland.

Being the kind souls that we are, we gave them a whole day off before thrusting them into the squelch that once masqueraded as our garden. The thankless task they were pointed at was one I’d started a few days earlier, so can’t be accused of asking someone to do something I wouldn’t do myself, even if it did damn-near kill me!

Before long they were knee-deep into the stuff, digging out the trench we’re constructing to divert the natural water off the rear bank and into the drain. 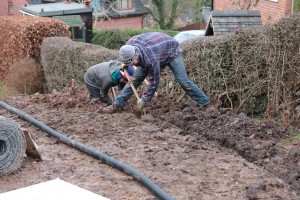 This week we also visited The Peak Wildlife Park, just 5 minutes from The Laurels.
As it’s recently been bought out by a new management company, we thought we’d take a visit to see what’s changed.
We’re pleased to say that the whole ethos has now changed – and for the better. The biggest change is the move from visitors just observing caged animals, to an environment of walk-throughs.
This allows you to wander inside the large animal enclosures and get up close and personal with all sorts of exotic creatures.
On the freezing cold day, we chose to visit, we came across a group of four Ring-tailed Lemurs all huddled up together. As we came closer, all four heads popped up one by one to see what was happening – their bright orange eyes standing out like Beneshia Beacons. Once we’d been eyed up, they returned to the huddle. Very, very cute. 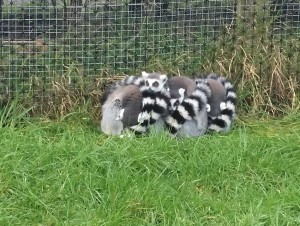 In the next enclosure, we found a large number of Wallabies, a couple of which has little Joeys in their pouches. The beauty of the new layout really came into its own here, as we were able to get close enough to stroke the adults and coo over the babies, as you can see from the video below.

As promised, here’s the small print for our competition. As you will see, it isn’t actually any smaller than the rest of the print, so you can be sure we’re not trying to pull a fast one.

This competition is not open to anyone employed by The Laurels, or anyone connected to the investigation/repair works being carried out.

“Help, I Need Somebody”

There probably aren’t too many parallels between The Laurels and that four-part beat combo, The Beatles, apart perhaps from the title of that particular song.

With just over 3 months before we reopen, the list of things we need to complete doesn’t appear to be going down quite as quickly as we’d envisaged. At this point, you’d be forgiven for thinking that we’ve had the last two years to get on with whatever needs doing and wondering why we’ve been sat on our fat behinds doing nothing.
Well, that’s partly true, apart from the bit about fat behinds of course. The trouble is, we’ve spent most of the last two years not knowing if we’d ever open again, or if we’d have any money, which kind of puts the kibosh on any kind of forward planning.

So, as The Beatles so eloquently put it, “…  And I do appreciate you being ’round. Help me get my feet back on the ground. Won’t you please, please help me“

Now that we’ve managed to implant a nice little earworm for you, let’s put that into less Lennonesque language.
If you fancy a day or two in the glorious setting of The Churnet Valley, wielding a paintbrush or a trowel, just let us know. In return for your time and skills, we can offer a comfy room, a hearty breakfast, lunch, dinner and the undoubted pleasure of our company!
How do you apply for such a pleasurable few days away? Simples. Just drop us a line via email, telephone or other telegraphic means and we’ll sort something out.

However, just to prove we’ve actually accomplished something. Here’s the proof. 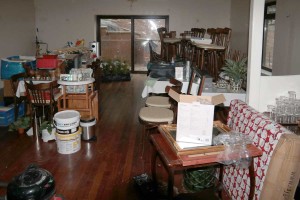 Yes, we’ve managed to make the Dining Room look like a complete mess.
Still, the plan is to redecorate it entirely in a fetching shade of something called Summer Pecan. Possibly not the most descriptive of colours, but let’s face it taupe isn’t exactly blindingly obvious for beige-brown unless you happen to know it comes from the colour of the average French mole.

Luckily we recently had a visit from some of the kids, who proved invaluable in helping us out with some of the prep work.
It’s often said (mostly by Helen’s parents) that just about the time your children become useful, they decide to leave home. This may well be true, but as long as you can persuade them to come and visit occasionally, you can reap the rewards of all the time and effort you put into bringing them up in the first place.

As you can see from the photo below, Son Number Two has truly mastered the art of applying builders caulk but hasn’t quite got the hang of putting his trousers on properly yet. 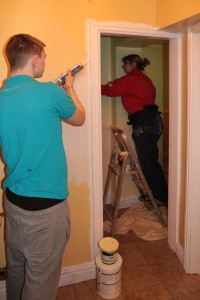 Meanwhile, out in the fresh air, our MIBs have been beavering away as usual. We now have a better idea of where our upper drive is going to end up, and the prospect of us having something else other than mud to look at, gets ever closer. 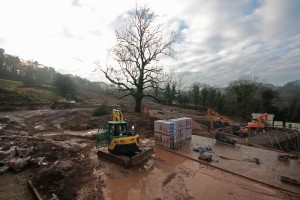 We’re already 2 weeks into the New Year and this is our first blog post. As many of my schoolmasters commented over the years –  “Can do better.”

Still, we haven’t let the grass grow under our feet. As soon as we’d finishing consuming our own body weight in mince pies and brandy butter, our thoughts turned to our reopening.

If you’re on Facebook you’ll have heard the good news already. However, if you’re not on the Book of Faces, and consider posting ‘news’ of your whereabouts, actions and motions (perhaps not all your motions), an inane activity, you will have missed out. To wit, our insurance company has agreed to reinsure us for 2016. So, once the MIBs have finished (currently scheduled for late March/early April) we’ll be opening our doors to paying guests again. Hooray!!

We’ve just signed up for a new merchant account, which means we’ll be able to take credit card payments soon, which in turn means we’ll be able to open up our booking calendar for 2016. Hopefully, this will all be in place before the beginning of February, so watch this space if you’re looking to make a booking.

The reason we have to wait until February, of course, is that all the necessary money laundering, credit and fraud checks have to be carried out first. To that end, we had to provide all sorts of ID and bills etc as well as allow our office and one of the bedrooms to be photographed just to prove we’re a bona fide business.
We’re not sure what that does in reality, apart from preventing us from buying £25,000 of class A drugs on a credit card machine and presenting The Staffordshire Slasher with a receipt from The Laurels B&B.

Anyway, we won’t actually be opening up the calendar for April bookings, or maybe even May just yet, as we don’t want any unforeseen delays in the building works to impact on our guests. This means until we’re 100% certain we have an official opening date, you’ll only be able to book for June onwards.

In other news, we had a visit from a couple of Effluent Routing and Discharge Engineers (ERDEs) the other day (aka Dyno-Rod). This aim of this was to survey all our drains with a camera, to ensure the earth movement around us hadn’t disrupted the efficient removal of our effluent. 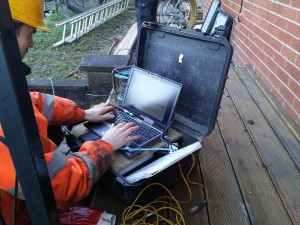 Using this clever piece of kit, the ERDEs were able to view our innermost workings via the camera, as well as record it all for posterity. It would appear we do in fact have a collapsed pipe and also one that’s misaligned. The former being caused by the hundreds of heavily laden vehicles trundling up and down our drive and the latter being caused by half of The Staffordshire Moorlands moving from the side of our house to the front of our house. Quelle surprise!

Talking of land movement, the earth bund, which is part of the overall scheme to arrest the slippy-sliding, is now approximately half-built. As they started building what will be a hockey stick-shaped lump, from the outside in, the last half presents rather a large gash in our hillside. You can gaze upon the size of this gash, and the overall state of the place, in the following video.

Remember, we’re reliably informed this will all be finished by the end of March. Here’s hoping.

Whilst all this activity has been going on outside, we’ve been planning the overhaul of the en suite in our Four Poster room to rid it of its current 1980s avocado suite. 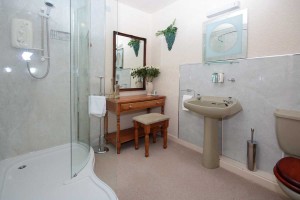 This resulted in a large number of boxes being delivered today, by a man in a van. All we have to do now is rip out the old one and put in the new one. Should keep us busy.

We’ll keep you posted on progress.