If you were to have visited us this morning, you’d have been forgiven for wondering if anything much had been happening recently.
The vista along our drive and up towards His field was one of a mini-mountain of stoney stuff, covered in small blue circles. 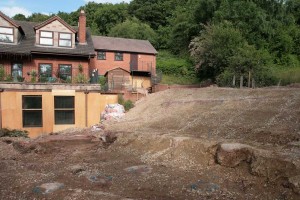 In case you’re wondering, looking at the photo above, we haven’t decided to construct an extension out of plywood. This was installed by our MIBs to protect the house from flying dirt, dust and concrete being thrown about by the SR30. The windows were also covered with polycarbonate sheet to provide both protection and allow light in. How thoughtful is that?!

However, the really interesting stuff was to be found lurking just below the surface, waiting patiently to be uncovered and revealed in all it’s glory like some archeological dig.
The first 8 of 68 concrete piles were slowly uncovered by the digger. 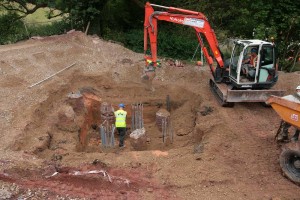 It’s got to be said, once the piles were exposed, they did resemble some extremely large Donner Kebabs sticking out of the ground, waiting for a passing person, somewhat worse for drink and temporarily relieved of their sense of taste, to devour them.

The next trick up the sleeves of the MIBs was to remove the concrete from the top 6ft of the piles, whilst leaving the steel reinforcement in place.
This led to the introduction of the amazing Mr Cropper.  This clever bit of kit, or Roy as we’ll call it, is basically a very large donut with some very nasty steel teeth.
As you can see from the video below Roy dispenses with the tiresome task of attacking the piles with a pneumatic drill, or worse still, a pickaxe and leaves all the hard work to hydraulics. What could be easier!

In other news, our local planning department have just published a consultation document, asking the residents of Oakamoor to comment on sites they’ve identified as possibly being suitable to build new houses.
This in itself is not a real problem of course, except two of the three areas they’ve identified are behind and to the side of The Laurels!!
Just in case you’re as up to speed on these things as the Staffordshire Moorlands Planning Dept clearly is, it’s worth pointing out one of these areas is subject to an active landslide, and the other one has been deemed to be ‘at risk’ by our insurance company.
Sometimes we really do question the thought processes of some of the bureaucrats we’re surrounded by.
Perhaps we should suggest our blog be made required reading for anyone thinking of taking up public office in Staffordshire.

Well That Was Boring!

Okay, I think we’re probably done with the ‘boring’ title thing now.
To be fair though, it pretty much sums things up.
The piling, in our little part of the world at least, has finished!

However, to enable the monster of mechanical massiveness, otherwise known as the SR30, to operate at the top of what used to be our drive, the MIBs first had to build up a mini-mountain of aggregate (stony stuff) upon which it could sit.
Just in case you haven’t quite grasped how big this thing is, here’s the view from the top.

Queue several million loads of stony stuff being delivered up our drive, then rolled and vibrated into submission, much to the annoyance of our neighbours no doubt. 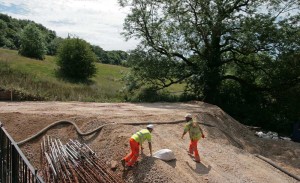 For one last time then, let’s just enjoy the mechanical massiveness that is the SoilMec SR30.
However, if the sight of 79,655 ft/lb of torque boring a 38ft deep hole, then filling it with 8,218 kgs of concrete and steel isn’t your thing, you may want to skip it.
Sure we’re mixing metric and imperial here, but we were kids of the 70’s, so things are confusing for us!


So, there you have it. Lots and lots of concrete and steel buried under ground.
All that needs to be done now, is for the piles to be joined up and topped off with a massive slab of (you guessed it) concrete and steel, just over 3ft thick.
First however, the MIBs had to remove all that stony stuff, that was so diligently piled and rolled, to enable the top portion of the piles to be uncovered.
In the piccy below you can see where the MIBs have sprayed another can-full of blue paint, marking out where all things concretey have to be uncovered. The circles are where the piles are lurking, just below the surface. 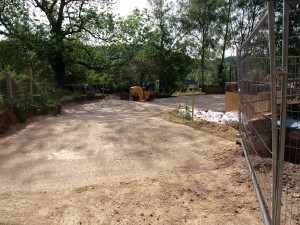 In a saga that’s gone on nearly as long as The Mousetrap, it seems we’re almost at the point where Plutus has agreed access to his land.
We’re led to believe signatures have been applied to the bottom of contracts, no doubt in gold nibbed pens, although apparently the documents have yet to be dated, so we’re not holding our breathe just yet.

In an unusual turn of events, we were presented with some good news recently. We’re now being assisted by our local Chambers of Commerce in finding professional people to help in our cause.
It’s extremely refreshing to find a body of people who are willing to listen to our issues and investigate possible ways to help us out, without any promises, but without expecting thousands of pounds in return either.

The Boring Men have been extremely busy of late.
Of the total 68 monstrous, reinforced concrete piles that need to be installed around The Laurels, they’ve completed around 55 of them. We’re not sure how much concrete this actually represents, but you can be sure that we won’t be competing for any green awards any time soon, as our carbon footprint is so huge it’s probably already trampled over most of Staffordshire.

It’s good to see that three of the most important piles have now been installed. These are the piles that will underpin the foundations of the garage/flat we were hoping to have built ages ago.
Unfortunately, given the projected costs of our rear wall, it’s likely the construction of the main building will have to be delayed for quite some time.
These piles, that we’ve had to pay for ourselves, come in at just over £2,000 each, so you can probably appreciate why we were so keen to see where our money was going. As it happens, it’s the same place the rest of our money is going – turned into steel and concrete and buried underground!
Still, at some point, future generations will no doubt uncover this mass of civil engineering and be able to appreciate it for what it is. 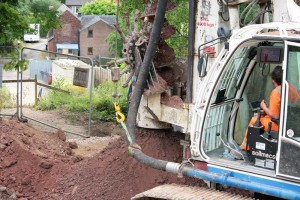 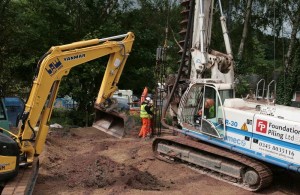 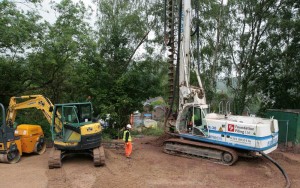 Whilst all this drilling, boring and earth moving takes place, we’ve been very impressed by our Boring Men. Not only do they clean up after themselves, they also take pride in what’s going on around themselves.

As an example, gravity, rocks and solidification had conspired to block our main drain the other day. We’d assumed, incorrectly as it happens, that the continual heavy traffic, consisting of cement lorries and dumper trucks etc had collapsed the drain under the tarmac, which has been showing the strain of loads it wasn’t designed for.
Once we’d informed our Chief Man in Boots of our constipated sewerage system, he immediately instructed the BMs to investigate the cause. This required large amounts of rodding, prodding and probing, as well as a not insignificant amount of crawling around with heads down drains.
As a consequence, despite it being well past home-time, the guys had managed to remove the blockage and ensure our waste was flowing in the right direction again.
You can’t ask for more than that.

Meanwhile it seems Plutus has been keeping a very close eye on things, just to ensure nobody, or nothing strays onto what he considers to be, his land.
The fact that his land has moved at least one metre in our direction, and is therefore trespassing on ours, doesn’t seem to matter to him when it comes to defining where our boundary now sits. It may be, that some time in the future we’ll have to return this soil to its rightful owner. We’re currently dreaming up ideas where it might be amusing to deposit it.
Answers on a postcard….