24th June 2014
Ten days since the last update? Where the hell did that go?!
Well, a lot of it has been taken up with planning our new kitchen. This was something we’ve wanted to change since we first moved in, but with one thing and another it just wasn’t possible until now.
Suffice to say, we’ve now finalised everything and ordered most of the new equipment, units and worktops 🙂
We’ll no doubt be giving you regular updates on this, but having put together a nice little gantt chart this morning, I can tell you, we haven’t got much time!

In true ‘Laurels’ style, we’ve also been having rather a lot of BBQs and generally enjoying the outdoors.
The first of these recent events included us throwing (our now) yearly barbie for The Girls. These hard-working beauties are responsible for the dust free, sparkling, loveliness that is The Laurels, so it’s only fair that we treat them to a sausage or two occasionally. (No sniggering at the back please). 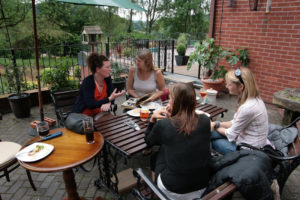 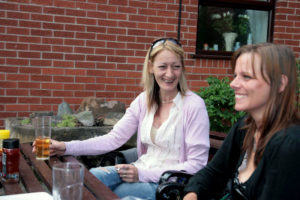 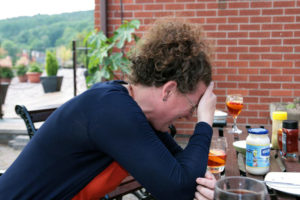 As a responsible employer, we should mention of course, the amount of Pimms on the table obviously had no impact on them at all.

Following on from this we also had some old friends round for a barbie. Whilst they were singing the praises of Oakamoor and this part of the country in general, a newly fledged Blue Tit decided to crash-land next to the table.
He very nearly ended up as part of the menu, as his somewhat haphazard flight path took him right at the glowing coals of charcoal below. (None of this gas-powered BBQ rubbish here). Fortunately, he seemed to catch the thermal of rising hot air, which just prevented a feathery fricassee finale.

Although apparently blissfully unaware of his near fiery fate, the poor little chap did seem to know there was food hanging around above him, but it did take several attempts before he made it into one of the feeders.
Having satiated his obvious hunger, he dived out of the feeder like a Stuka, only to crash land in one of our plant pots. This was pretty much all the little Tit could take, so he decided to take a short nap and recover.

You can see this feathery fellow co-starring in a rather silly video here.

Our insurance company (NFUM) have confirmed that the builder’s insurers (Aviva) will pay for the scheme to stabilise the land around The Laurels and the repairs to our walls, fences, land, carpark etc 🙂
We now have to wait whilst they sort out the program of works, so we know how, when and what they’ll be doing. Watch this space!

To celebrate, we decided to have a BBQ (just for a change) and enjoy the sunshine.

With the current focus on locally sourced produce, I can confirm the lovely lamb chops we enjoyed, were born and raised about 200 metres away. You can’t get much more local than that.
Having said that, the chicken came from Asda, so who knows where that came from. 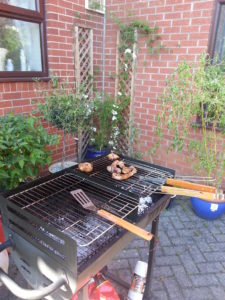 I also took the opportunity to snap a few photos of the view, on my phone.
The place may still be sliding down the hill around us, but it’s still a marvellous place to live! 🙂 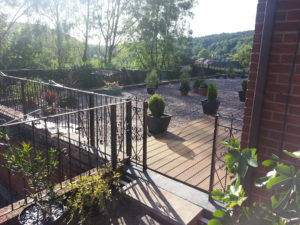 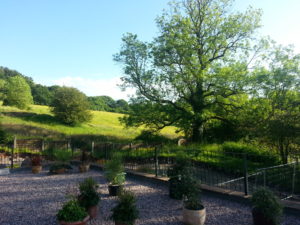 June 10th 2014
The Boring Men turned up again today.
Seems they’re investigating groundwater levels now, so they’ve started to boreholes in the middle of the natural spring runoff that meanders down the hill next to us, into the excavation.
I’m no expert, but I’m pretty sure they’re going to find the water level is pretty close to the surface there.

In the meantime, we decided to go cycling again.


June 9th 2014
Isn’t the internet a wonderful thing?
Well, not according to my Mother. She thinks it’s the spawn of the Devil.
However, I happen to rather like it. It enables us to do all sorts of things we wouldn’t have thought possible, just 20 years ago and I’m not talking about exotic films starring men with moustaches either.
The trouble is, we’ve come to rely on it. Especially when it’s pivotal to your business model – so when someone takes it away or prevents it from working properly, we tend to get a bit grumpy.
So grumpy is what I’m currently feeling. Or is it crotchety, crabby, tetchy, waspish, prickly, irritable or irascible? Either way, I’m not a happy bunny.

As far as I’m concerned my current ISP (Digitel Europe) currently contravenes the very definition of ISP, which is supposed to be;
1 – A company that provides the internet and
2 – One that also provides a service

Now modems that go ding dong, ding dong, screeeech went out with the ark, but apparently the speed they generated hasn’t – because that’s where we’re currently stuck, with an internet connection that has all the alacrity of a sloth wading through treacle, who’s wearing wellies, that are also full of treacle.
In fact, according to a test I did this morning, our connection is slower than 83% of all those tested. I can only assume the remaining 17% live in Islandmagee or some other technological black hole.

The second part of the definition requires the provision of a ‘service’.
I’m not sure being offered compensation, for continued poor service, but then forgetting the whole conversation ever took place constitutes service.
I also wouldn’t call levying an early cancellation charge of over £1,100 much of a service either.

So, there you have it – Digitel Europe – the company that pretends it’s an ISP, but doesn’t appear to be…

June 4th 2014
I can’t believe it’s June already. A mere 6 months after our landslip first became obvious, we’re still waiting for the official word on who will be paying to fix this mess.
We’re told we should hear something next week, but then my horoscope told me yesterday “Expect good news about money. This will cause you to feel especially positive” and I don’t believe that’s going to happen either!