How to Start a Landslide

March 20th 2014
Picture the scene, if you will.
A local builder is hired to replace an old wall at a lovely B&B. He knocks the old one down and proceeds to lay foundations for a shiny new one. (Not that the wall was supposed to be shiny – Just sort of red).

Having laid many tons of reinforced concrete perfectly smooth and level, he comes back the next day to find a small hairline crack right across the middle.


“Woe is me!” he exclaims on discovering the tiny crack, “I must have made a terrible mistake and mixed concrete with all the strength of the Conservative/Liberal Democrat coalition”.

The very next day, he digs up the cracked foundations and lays them again, with bigger reinforcement to a depth of 24″ (That’s 60.96cms for the decimal minded).
The day after that, with much trepidation, he visits again. Would his reputation for mixing concrete as hard as The Iron Lady be recovered? Or would he be destined to spend the rest of his days cowering in dark corners, like Neil Hamilton MP – shamed by the weakness of his crumbling foundations?
“Curses and curses again!” he shrieks, when seeing the concrete, for it too has mysteriously taken on the appearance of hair and cracks.

With much misery, he approached his master. Afraid for what he must admit. “I have mixed concrete with all the resilience of George Osborne’s fiscal policy” he sniffed. Ashamed of his retched incompetence and fearing the worst.
Luckily his master was a kindly soul, who took pity on the concrete mixing man.
He pointed to a hole in the ground, the size of a football pitch and said: “It’s not you that’s at fault, it’s those d*ckheads down there!!”

And so began the sad story of The Laurels B&B’s temporary closure…..

March 21st 2014
So the question is. If you live three-quarters of the way down a 323 ft hill, and someone below you digs a hole 76 ft wide, 190 ft long and 35 ft deep, by allegedly removing 122 lorry loads of earth, right at the bottom of your garden. What’s likely to happen? 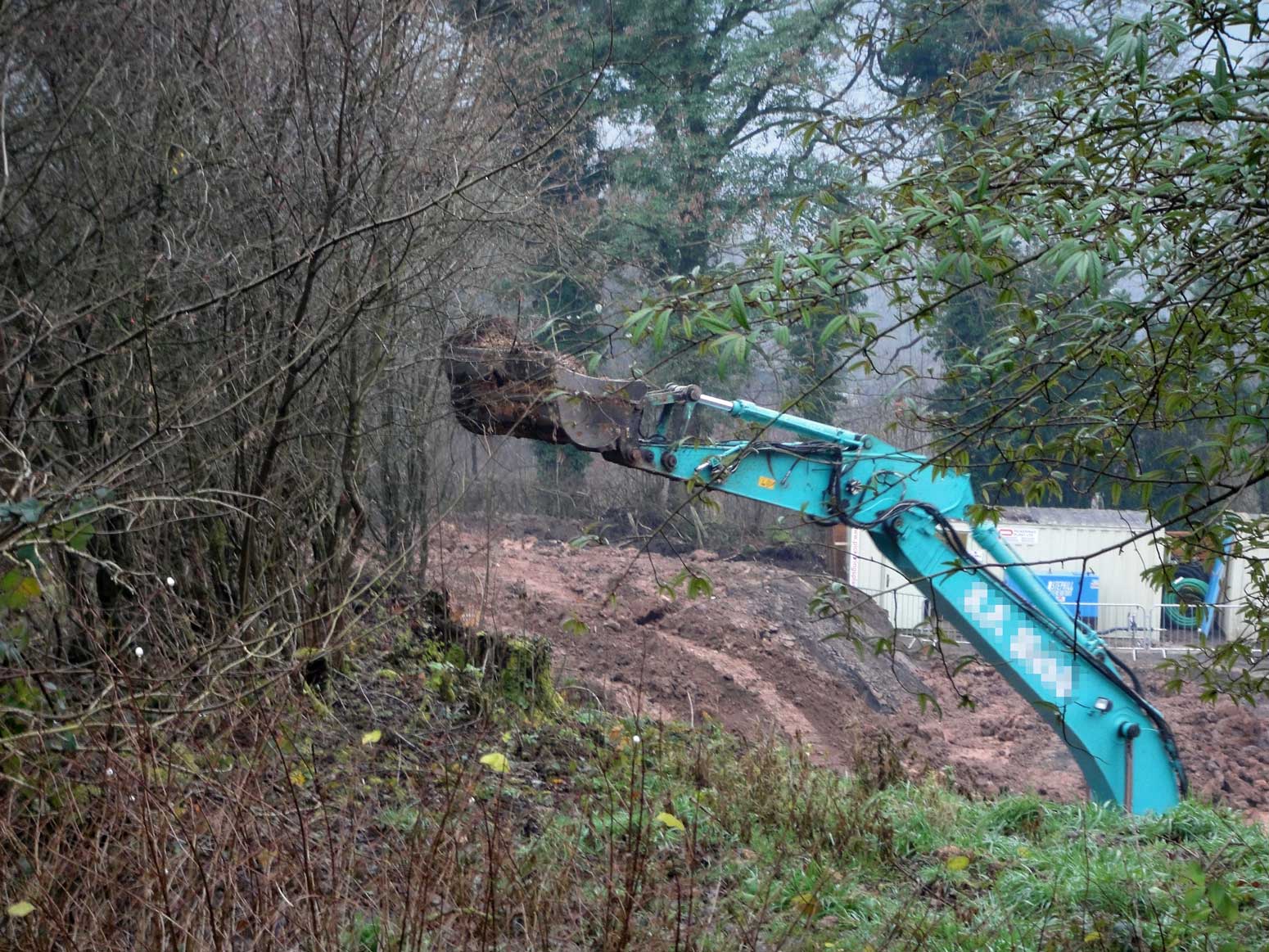 Well, you end up with something that looks like this. 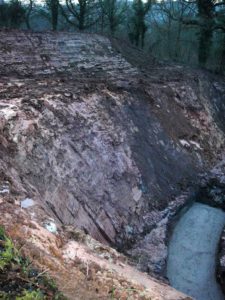 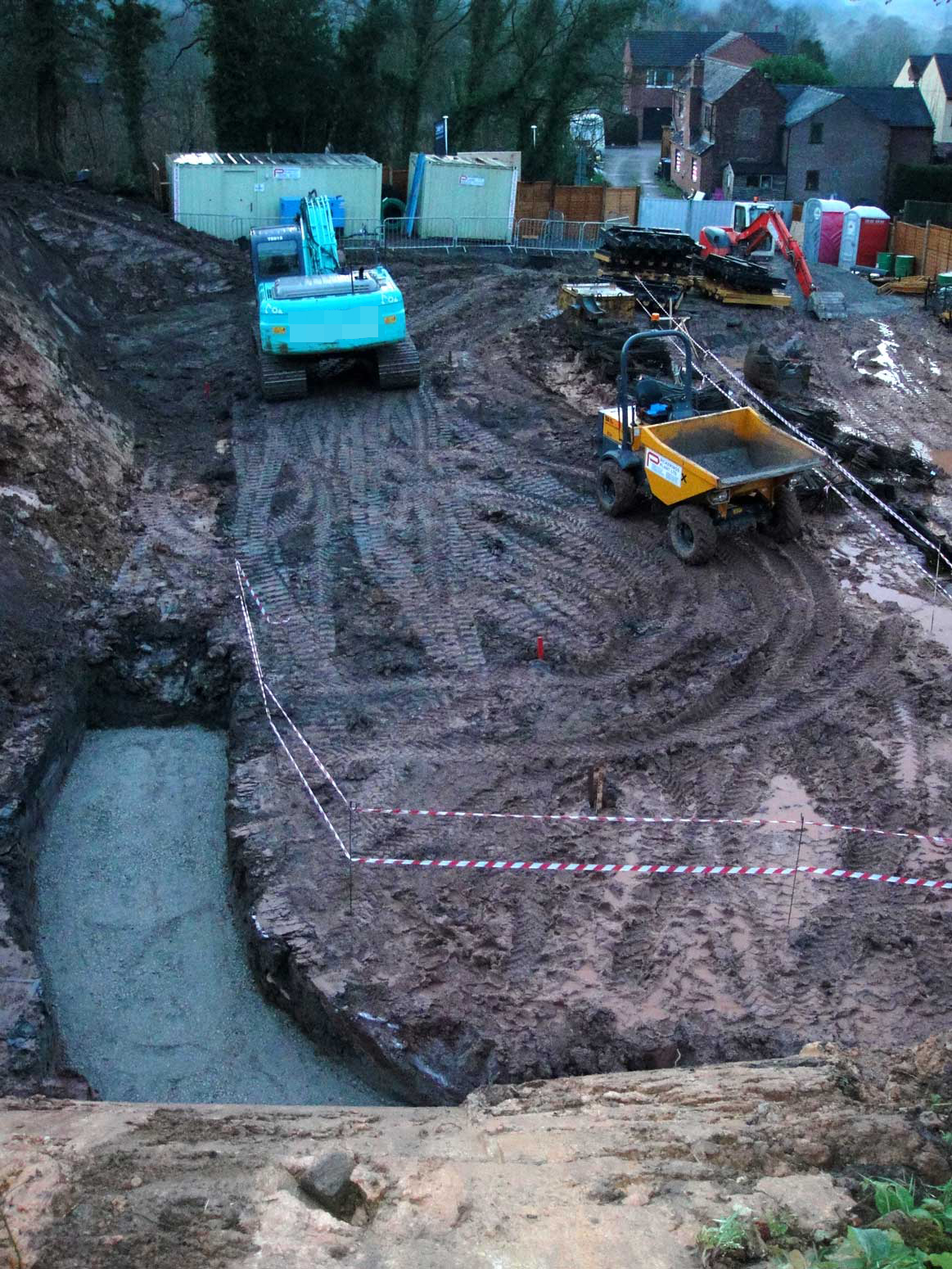 … A rather impressive looking hole with nothing except crossed fingers to hold it up.
Those of you familiar with the film “Ghost” will no doubt remember the scene with the potter’s wheel and all that clay.
What the hell’s that got to do with this? I hear you ask.
Well, I’m sure you’d have noticed from the film that clay is a little difficult to work without some kind of lubricant. You’ll have also noticed then, that water turns clay (which is what our hill is made of) into a rather slippery little customer. Fast forward from fumbling hands and phallic objects in Hollywood to the real world and you can’t have failed to notice that Winter 2013/14 was a wee bit damp.
This somewhat iffy combination of massive, unsupported excavation and the wettest Winter in a zillion years has resulted in the inexorable slide of our hill towards the rather large hole, taking our walls, fences, drive and carpark with it, as evidenced below. 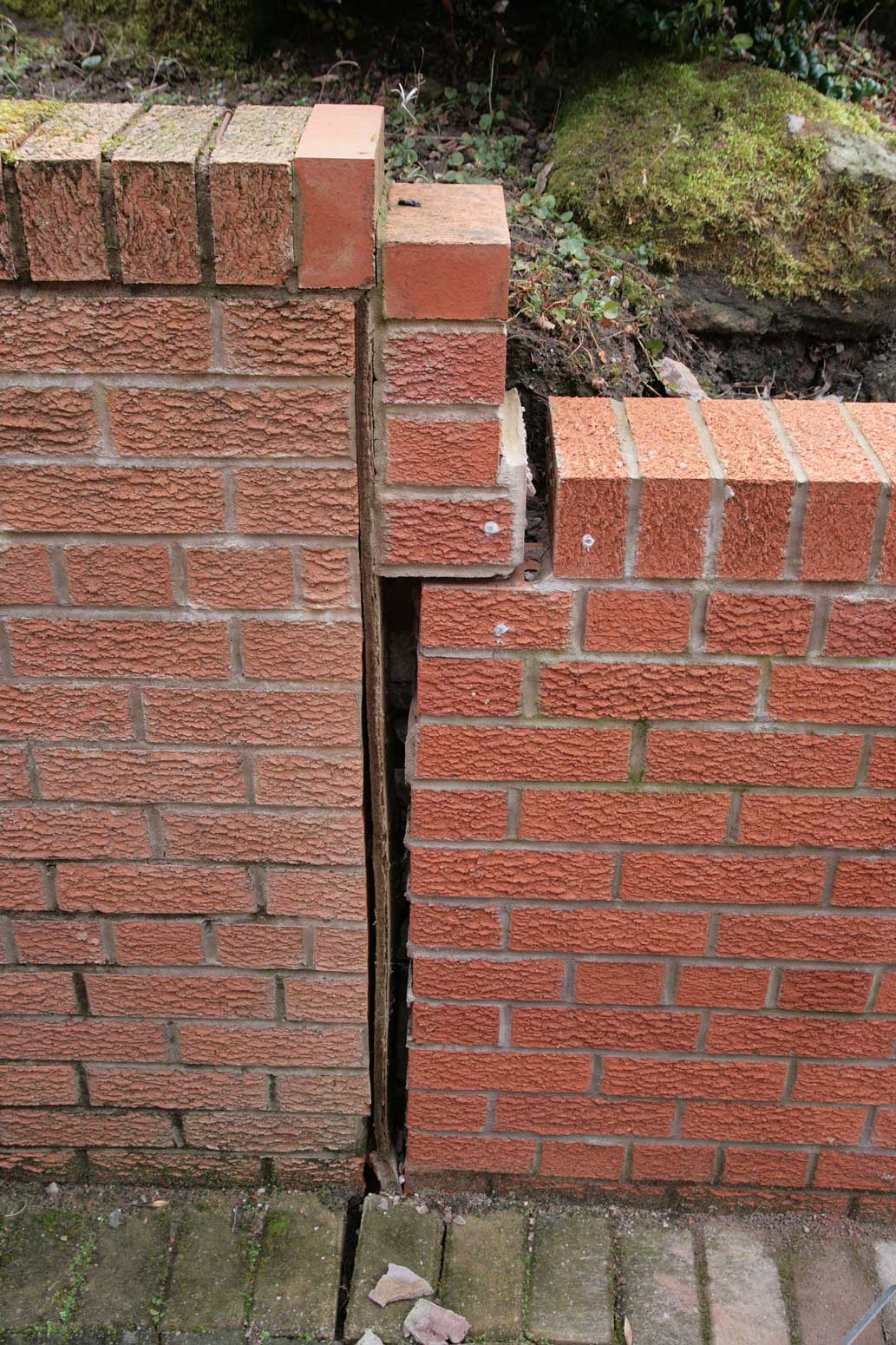 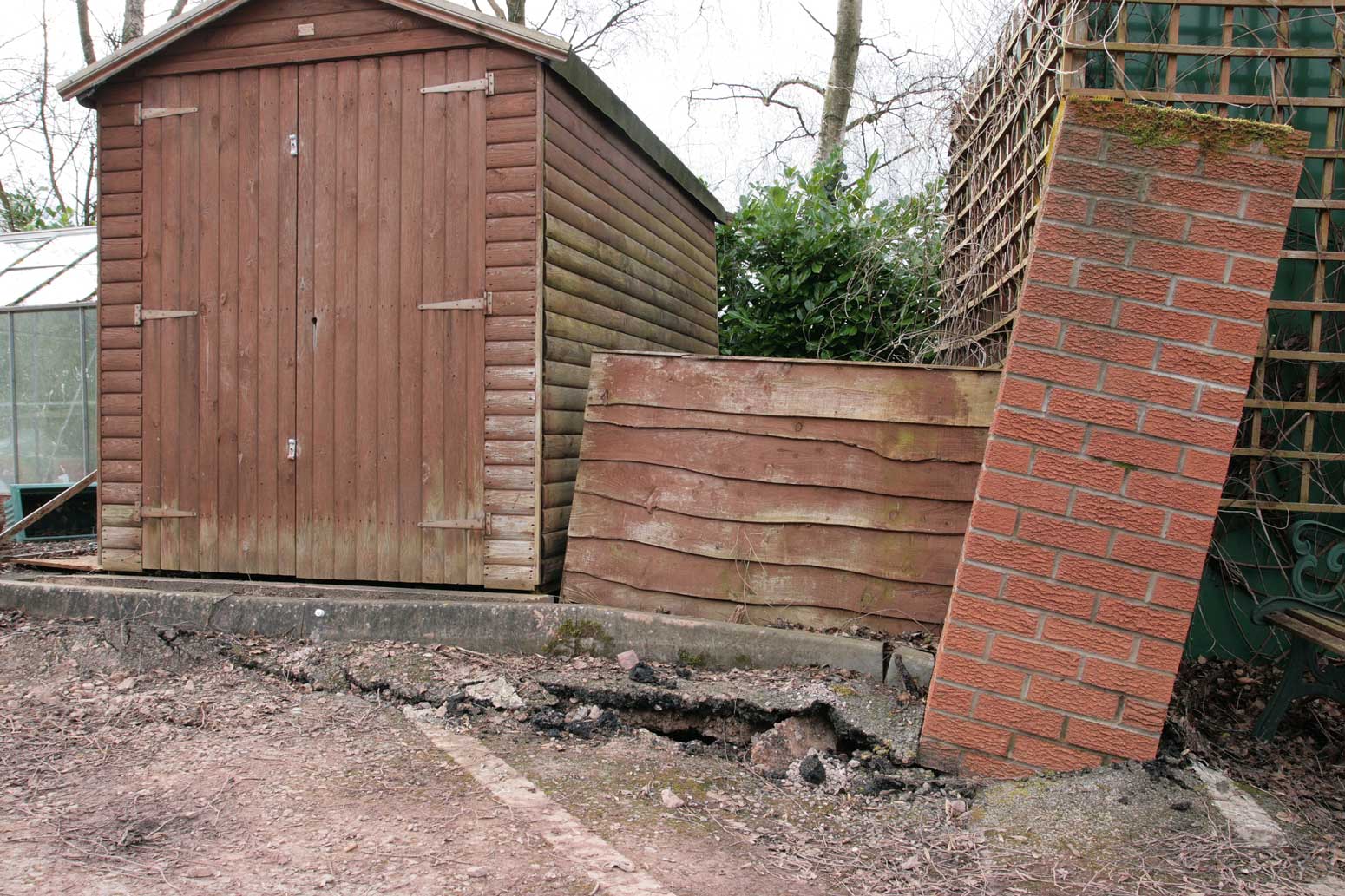 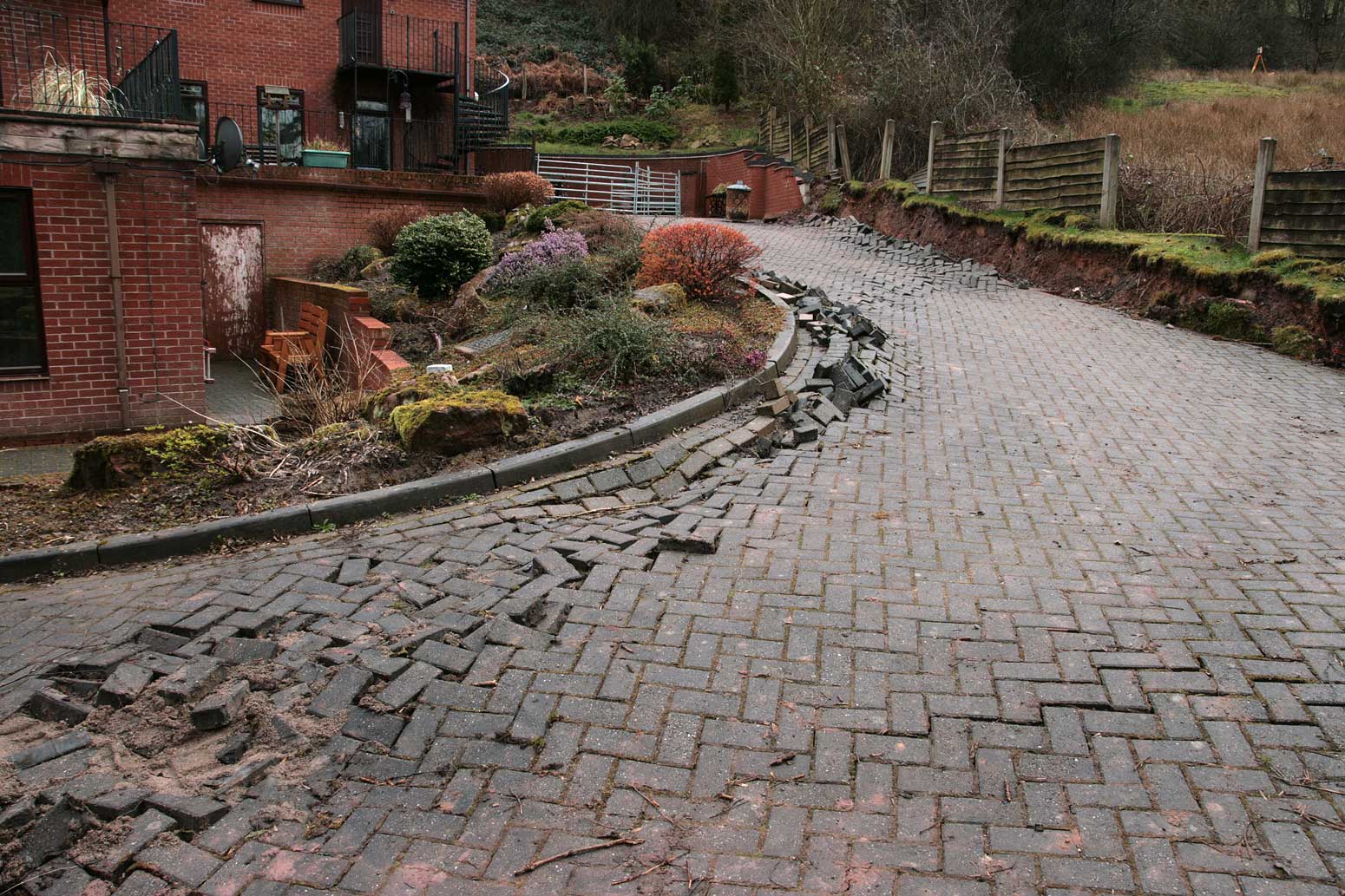 March 23rd 2014
Over the last week or so our insurance company (NFU) have been busily installing monitoring points on the building. I stopped counting at 15, but these little white bobbins have been popping up all over the place.

Happily, according to the high tech, laser-guided do dah they deployed to measure these things, the building hasn’t moved an inch (which is just as well because an inch would be very bad).

One of (the few) good things about this whole fiasco is its ability to uncover previously hidden issues.

Since we moved in, just over a year ago, the lights down to the end of the drive haven’t worked properly. Enquiries of the previous owner identified a junction box to be the likely culprit. The problem is, asking him where the junction box was located only resulted in a vague pointing towards a large mound of earth on which various shrubs had been planted.

As luck would have it NFU sent round a little man to produce what we’re calling a 1:1 scale topographical map of our underground cables.
This resulted in a set of lines and depth measurements painted all over the place in a very fetching shade of pink 🙂 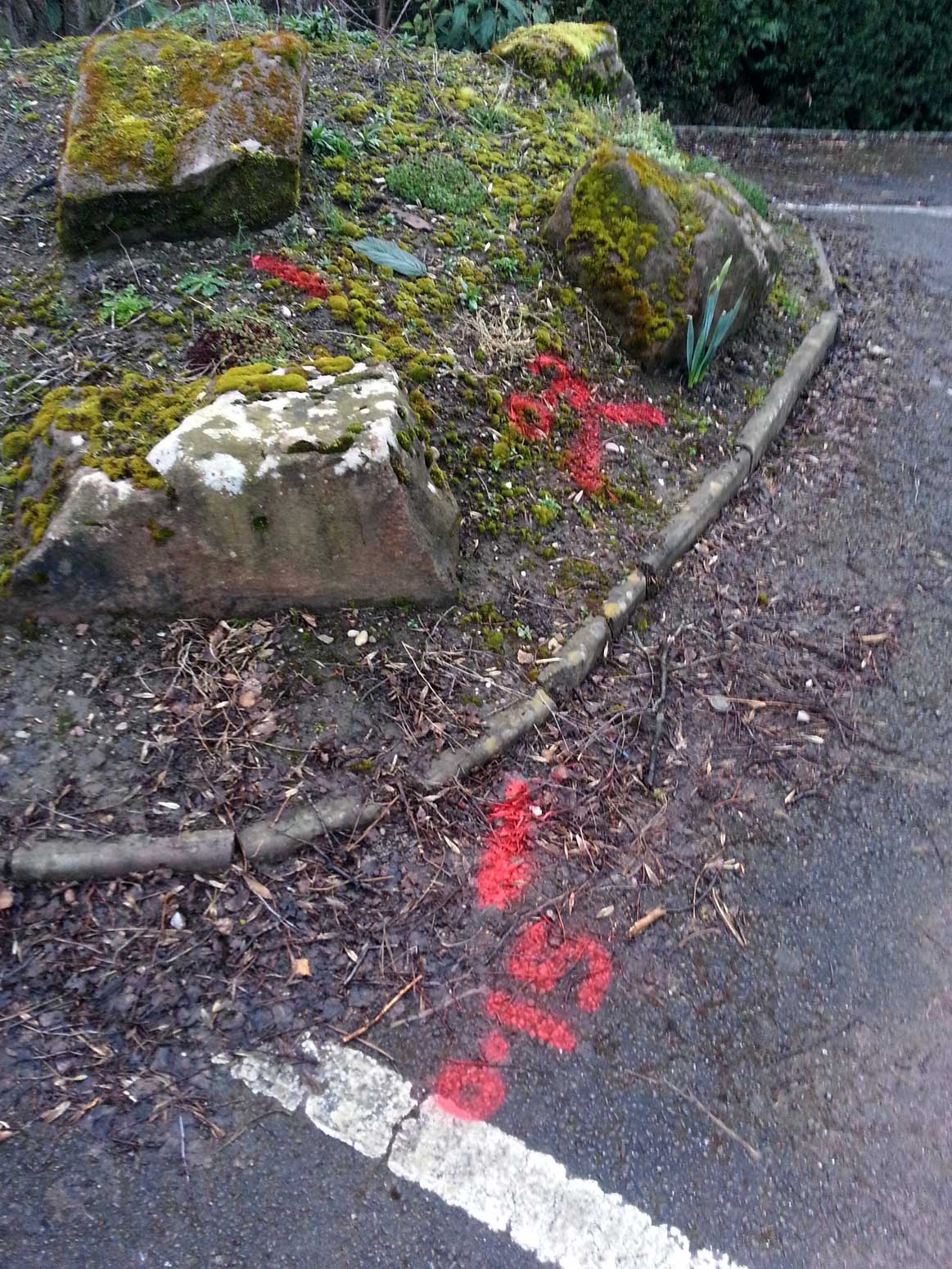 As you can see from the photo above, the junction box’s exact position is now marked, so I can now dig it up and have a look. The only slightly worrying thing is that I was clearly lucky not to have sliced the cable with my spade when planting one of the shrubs.