28th May 2015
It’s been a wee while since an update, for which I apologise in advance, but not an awful lot has been happening here recently, except of course the many hours we’ve been putting in running our new website design business, which we’ve imaginatively called Laurels Tech Web Design.

This week however we actually received some good news. I know, we couldn’t believe it either!
Apparently the excessive demands made by Plutus have forced the insurance company to spend thousands of pounds more in designing and installing an interim stabilisation solution, which will enable them to start work on our place, before the work that was originally planned to start further down the hill.
In essence, it’s possible that we could even reopen for business by the end of 2015. That’s the good news bit by the way, not the bit about the insurers having to pay thousands of pounds more than necessary.

We’re told by The Boffins that work will start on 8th June to install some additional metal piles on our property, which will enable the main, gigantic piling machine to operate, without the risk of it triggering another landslide and plunging into the hole below.

On the downside (yep, there always seems to be one) we still haven’t managed to extract a plan or price from the Men in Boots who will be sorting out our rear wall issue. Apparently we have to wait another couple of weeks before final plans and costings are in place, but it does seem that any hope of a relatively cheap solution has vanished quicker than the Lib Dem’s presence in the Houses of Parliament. All of which means we’re still going to have to find a very substantial sum of money before we can reopen.

In other news, as they used to say on News at Ten, we’ve decided to introduce a regular slot on here called Crank Calls. This isn’t where we ring someone up and tell them their car has been repossessed or other ‘humorous’ wind-ups, but an attempt to demonstrate some of the weird and wonderful calls we get from prospective guests, sales calls and random psychos.

This week Helen had the pleasure of answering the phone to a gentleman who was enquiring about room availability.
When Helen explained that we didn’t have any rooms because we were closed due to a landslide, he said: “So why did you answer the phone then?!”
Helen suggested that answering the phone was a good idea for a couple of reasons. Firstly, it’s our home phone, so that’s what we do and secondly, surely it’s better to answer the phone and explain why we haven’t got a room, than not to bother answering it at all?
To which he replied “No, not really. And by the way – what’s a landslide?”
The mind boggles…

Now that something may actually be happening here soon, I promise not to wait so long between updates.
#dontyoujusthatehashtags

And The Beat Goes On and On and ……

4th May 2015
Time marches on, irrespective of the desires or demands placed upon it by those who must dance to its endless tune.
Who knows what that actually means, but it seems apt in these circumstances.
Whilst Plutus waits patiently for his 30 pieces of silver, we’re left observing the inexorable slide of our property down the hill, into the picturesque valley below.

It’s 58 long days since we were informed that work on the stabilisation plan would cease due to lack of access to the adjacent field, so nothing has moved since then. Except, of course, our property.
Unfortunately, there’s no reason for the landslide to stop moving because nothing has been done to arrest it, which means the cost of repairing things is only going to increase.

Here are a few photos, taken yesterday, which attempt to portray the sort of thing that’s still happening: 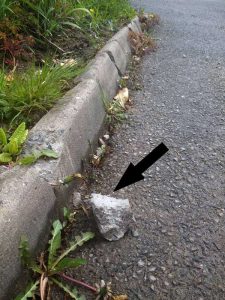 These are the curbstones which line our drive. Despite being over 20 metres away from the house, they’ve been subjected to such significant lateral forces that they’ve been displaced and have started to break apart. 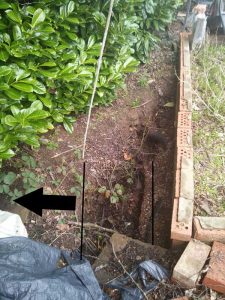 Next to where our greenhouse once stood, is a crevice that is now over 40 cms wide. Who knows how far this will move before work starts to fix things? 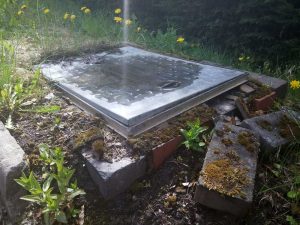 You may be wondering why we’ve included a photo of a drain cover. Simple really. Many, many months ago this was used as a ‘fixed’ datum from which all other measurements could be made.

Again, despite being over 20 metres away from the house and 25 metres from the sinkhole, this manhole cover has been disrupted by the earth movement to such an extent, that it’s as much use as a datum as Ed Miliband’s hamburger eating technique. As a consequence, the chances of getting any meaningful measurements from this point are about as great as getting David Cameron to admit his fiscal policy may slightly favour the better off.

Still, things could be worse, he could have new cracks appearing across his car park just like we have …

The next time I update this blog, we can only hope the result of the general election is known, and we don’t have to suffer the endless campaigning of a bunch of desperate, power-hungry, politicians who claim to represent our better interests.

P.S Any politician who advocates the public stoning of incompetent civil engineers and their builders will get my vote!