There’s nowt as queer as folk, they say. Although ‘they’ normally wear flat caps and own Whippets as far as I can tell. And so it proved – the queerness that is, not the flat caps.
Having decided we wanted to go and see the ceramic poppies at The Tower of London, we duly arrived at the train station with a zillion other people on Remembrance Sunday. As the train approached, it was clear that people were already standing, so we prepared ourselves for the worst.
On entering the carriage we all crowded into the doorway area like little sardines, looking somewhat glum. At this moment my eye was drawn to four seats around a table, further down the carriage. You know, the setup where two people have to travel backwards, whilst the other two get to stare them in the face the whole journey.
Around said table were two blokes, sat diagonally opposite one another, a bag and one coat occupying the other two seats. Clearly, some of the sardines we’d joined on the train had already been standing for some time, so I approached the seated men and enquired as to whether they minded if I took one of the seats occupied by the small bag.
The look I was given couldn’t have been any worse if I’d been enquiring whether they knew the phone number of the local paedophile group – but despite this, I sat opposite one of the blokes and tried not to stare at him for the whole journey.

On arrival at Marylebone (Is it just us that calls it Mary Le Bone?) I decided I needed to attend to the call of nature, or spend a penny as we used to call it. Spending a penny? If only. I had to spend 50 pennies. That’s a 4,900% increase since I was a boy! Which got me thinking.
When I was a boy, I used to get on the bus to school, which was about a mile away, for the princely sum of 2 old pence (actually called a half-groat), which is equivalent to 1p.
All of which means, the same bus journey today would only cost 50p. So maybe the penny I was spending wasn’t quite as overpriced as I’d thought.

On our eventual arrival at The Tower, we were greeted, firstly by thousands of people and secondly by the thing we’d come to see -The Poppies. All 888,246 of them, designed to represent the number of fallen British or Commonwealth soldiers during The Great War.
I’m not going to attempt to wax lyrical about the impact this has when you first see them. So instead here are a few photos we took instead. 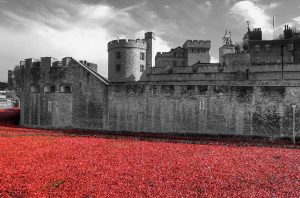 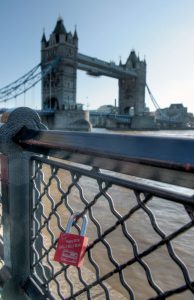 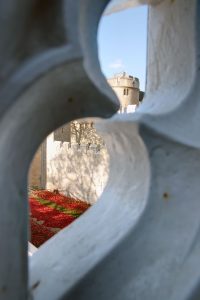 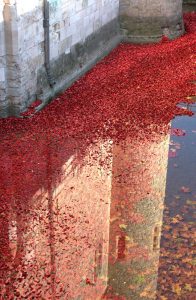 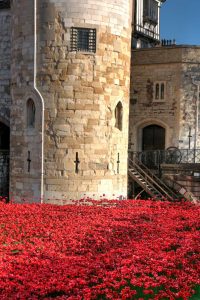 Given there were rows of people, five or six deep from the edge of the moat, trying to see the poppies, people were very patient in waiting for their turn at the front. Apart, that is, from the foreign tourist who placed her hand on my waist, as I was taking one of the photos above, and tried to shove me out of the way!
Being British I merely looked at her and tutted, which was clearly way too subtle for her, as she seemed quite put out that I would have the audacity to continue to stand in her way. Ho-hum.

After admiring The Poppies we decided it would be a good idea to enjoy the view of them from the top of The Shard, so we wandered off in the direction of the tall, shiny, glass building we could see on the other side of the river.
Strange isn’t it how something over 1000ft high seems quite close when seen from a distance. 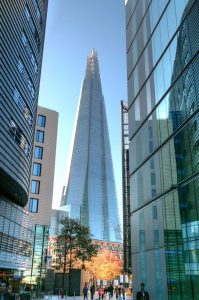 Sometime during our saunter towards The Shard, we decided it was time for a spot of lunch. Of course, 1:30 on Remembrance Sunday probably wasn’t the best time to search for somewhere to eat that met our criteria. You know, not too busy, but not empty. Not too expensive, but not too cheap – that sort of thing.
After several aborted attempts, where they expected us to wait for a table, we ended up in a very nice little Italian restaurant that met our criteria perfectly. We’d even checked out the prices, whilst we stood outside, to ensure we weren’t going to have to take out a mortgage for a bottle of wine.
Strangely the staff seemed to have agreed on a bad waitress, good waiter approach, which meant we see-sawed between loving and hating them. Still, the food was very good 🙂
Several glasses of wine and a rather nice meal later, we asked for the bill. This is where we discovered their sneaky little plan. Of course, they’ve got their prices displayed outside, as required by law, but what they don’t tell you (until you get the bill) is that they’re going to whack a discretionary service charge of 12.5% on top. The clever thing about this, of course, is that they know we’re British, so they know we’re not going to complain – we’re just going to tut a little bit and pay up anyway.

Some £75 lighter of pocket, we resumed our journey to The Shard. It’s glassy, pointy shape all shardy in the distance. 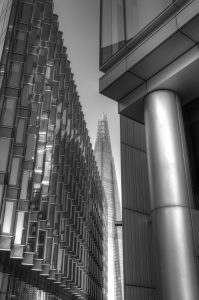 We eventually arrived at our goal and investigated the admission price for climbing the 72 floors to the viewing gallery. I can’t remember how much it cost us to go up to the 103rd floor of The Empire State Building in New York, but I’m sure it wasn’t £30 each, so we gave it a miss and returned home.
Like I said. Some folk are right queer.

3rd November 2014
According to one of the many dictionaries available for you to peruse online, the definition of insurance is “something you do to protect yourself against something bad happening in the future”.

Perhaps more surprising, to me at least, is the use of the word insurance peaked in 1945 but has declined since. Let’s assume the not insignificant disagreement between Germany and the rest of us had something to do with that.
Anyway, we may just have an issue with this particular definition as, despite being fully insured, something very bad is happening and we find ourselves about as protected as a nudist in a pool of alligators.

The cause of this bad happening is somewhat complex, but as the readers of this tome are generally an intelligent bunch, there’ll be no need to dumb it down, although it needs shortening somewhat, as I’m not trying to write a book about it – well not yet anyway.

As you probably know, thanks to the Idiot Builders digging out the bottom of our hill, things have gone all slippy slidey, with a landslide to the front and the side of The Laurels.
The assembled Boffins, called in by our insurance company, have proved it was the Idiot Builders’ fault, so they get to pay for the repairs, which seems fair.
Whilst the Boffins were here they also proved the bank behind us had not moved at all. Not one bit, nada, diddly, zilch, so it’s nothing to worry about.

Unfortunately, whilst they were boring their holes, they also had a look at the rear wall in front of the bank and decided it would fall down if it was subjected to a landslide. Which is very probably true as it was built in 1982, like most other retaining walls, to stop dirt falling on the path between the house and the bank – nothing else.
However, we know there’s no landslide behind us, even though there’s a massive one adjacent to it, so we weren’t concerned.
Trouble is, we should have been… 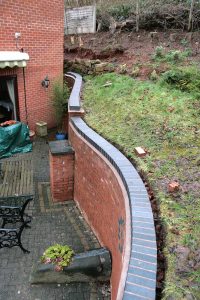 For some inexplicable reason, our insurance company have now decided that we must replace the original wall and stabilise the bank behind it, just in case there’s a landslide in the future, however, remote the chance.
As if that’s not bad enough, we’re expected to find the money to pay for it ourselves!

So if anyone’s got a spare £100,000 hidden under their mattress they wouldn’t miss, please get in touch.