The last few weeks have been very hectic here, which is my way of excusing the fact that we haven’t updated the blog in a while.

One reason, is the amount of time being taken up by our web design business, but we’ve also been entertaining our latest Workawayers.

Flor and Nico arrived at Stoke Bus Station from York, although they’re actually in the middle of a mammoth tour of Europe, having originally left their home in Buenos Aires some time ago.
Having agreed to pick them up from the Bus Station it soon became apparent that, although we had a photograph of them, we didn’t have any other contact information. This resulted in me sitting in the car outside the Bus Station, as there’s never anywhere to park at these places, whilst Helen approached a likely looking couple wandering around outside. It turned out the likely looking couple were actually very unlikely to be a couple of Argentinian tourists and looked at her as if she were some kind of mad stalker when she enquired as to the purpose of their arrival in Stoke on Trent.

Having eventually established their bus hadn’t even arrived yet, we sat around pensively scanning the crowds for Argentinian-looking couples. It’s probably just as well I’d never considered a career in the CID, as I was really bored of staring at faces after only 10 minutes. Clearly, staking out suspects is a lot more difficult than it appears on the tele.
Eventually, boredom got the better of me, so I left Helen in the car and wandered into the station concourse. As luck would have it, or was is just long dormant skill I wasn’t aware of, I immediately stumbled over a couple hauling huge bags.
We did that strange staring at each other thing, trying to read each other’s minds for a few milliseconds, before deciding it was safe to assume we were indeed the people we’d each been searching for.
A quick handshake and a bit of continental cheek kissing had them settled into the car and on the way back home. 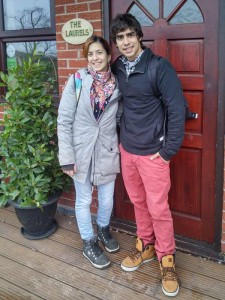 Although Nico bore a striking resemblance to Fernando Alonso it was clear his skill set lay elsewhere other than driving fast cars.
This delightful couple spoke excellent English which allowed us to thoroughly enjoy our time together. We even managed to mention the war without anyone getting upset!

Meanwhile the MIB2s had made inroads into our rear bank, whacking in a good few soil anchors. Unfortunately they were being whacked into good solid rock, instead of the clay which everyone else apart from us, had assumed would be there.
Having since spoken to a professional geologist and a structural engineer it’s clear there was never any need to do anything here in the first place. But Helen and I both knew that 12 months ago, before we were forced into spending tens of thousands of pounds of our own money by our insurance company! Not that we’re bitter of course. We’ll leave that to the Caffreys. 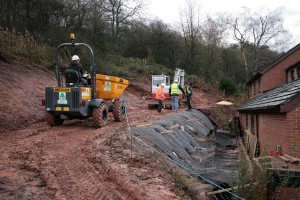 Having been found guilty of prematurely counting our chickens, it seems a total redesign is now needed, which leaves us at the point of still not really knowing what’s going to happen, or how much it’s ultimately going to cost us. Unfortunately though we suspect there may be arms and legs involved.

Whilst we’re on the chicken(ish) theme, we were reminded of the old phrase ‘over egging the pudding’ the other day, when our Argentinian guest Flor, suggested she’d like to make us her special lemon pudding.
This sounded like a lovely idea, so suggested we went out and bought the ingredients needed. Bearing in mind this was only for the 4 of us, the inclusion of seven lemons and ten eggs left us both somewhat aghast. Nevertheless, we delivered the requested ingredients and waited for Flor, who’d worked as a pastry chef in the past, to do her thing.
They do say (when feeling the need to chuck in one too many metaphors, proverbs or similes) that the proof of the pudding is in the eating. Well, we can safely say, adding tens eggs did indeed seem to be exactly the right number. The lemon pudding, or lemon meringue pie as we would call it, was absolutely fab!

You may be wondering what’s happened to our original MIBs. In fact they’ve been busy adding another few thousand tons of stone and gravel to the Staffordshire countryside, in the form of the earth bund.
You can see the results of their work in the bottom right hand corner of this photo, taken by my really dangerous, aircraft threatening, privacy intruding drone – well, according to the BBC’s Watchdog it is anyway. 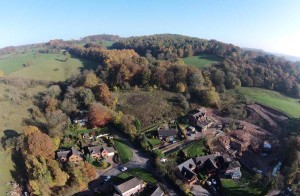 Tune in soon to find out what happens with the re-design.

Our Rear Comes Under Scrutiny

Our MIBs have been keeping a low profile recently, working in the Idiot Builder’s excavation site to create the earth retaining bund.

In a slightly worrying bit of deja vu, there appears to be another large amount of digging at the front edge of our boundary. However, this time, the work is being carried out by people who know what they’re doing, so our stress levels are pretty low.

As you can see from the photo below, the base of the right hand edge of the bund is now being created. 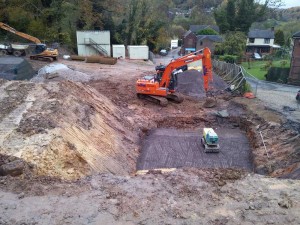 You’ll also notice the little green and yellow Mars Rover sitting atop the stone base. This clever little bit of kit is a vibrating roller, designed to compact the engineered stone fill below it. The real clever bit though, is that it’s remote controlled. This means Rover can be lowered into position, then controlled by an MIB who can stand out of harm’s way, whilst it does its vibratey-rollery thing.

Meanwhile, further up the hill, one very early and very foggy morning, a second set of MIBs arrived. These are very important MIBs, as they’re here to start work on our rear wall and bank.

The importance of MIB2 is two-fold. Firstly, they’re here to do the work which should (hopefully) allow us to get the necessary insurance to reopen and secondly, they’re being paid for by us. Multi-billion pound insurance companies may be having to fork out over £2 million to fix the mess all around us, but we’re having to pay for this bit ourselves.

To kick off this piece of work, Helen and I had to first provide access for the heavy machinery. This required the removal of a 15ft cherry tree and part of our carpark wall.
Given that I’d observed the Tree Fellers for a few hours, I felt confident (stupid?) enough to take on this task myself. Armed with a chainsaw and a plethora of safety equipment we managed to fell the beastie in exactly the right place, without destroying our neighbours hedge – phew!


Having chopped up a year’s supply of logs for our chiminea, we then attacked the wall in an effort to reduce it’s height sufficiently, to allow the MIB2s to construct their stone road. 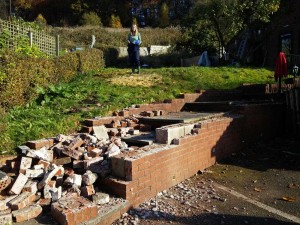 The photo above shows Helen marking the original position, but not the size, I hasten to add, of our cherry tree.
It’s got to be said, the term cherry tree was always a bit of a misnomer anyway, as it’s only produced a total of ONE cherry since we moved in.

Having arrived, and started work at 7.20 am the MIB2s had the access road finished within a couple of hours, and immediately began work on our rear. 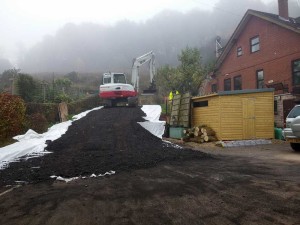 We won’t bore you too much with the technicalities, but essentially the rear bank is going to be stabilised using ground anchors in a top down approach. This means, unlike the Idiot Builders below us, we’re going to make sure the bank doesn’t fall down by anchoring it BEFORE we excavate. Not exactly rocket science, but there you go. 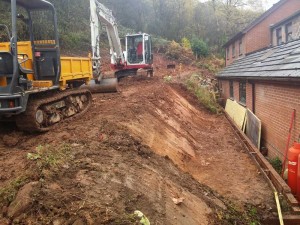 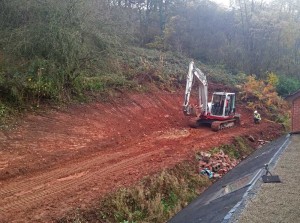 Sharp eyed readers will have noticed my timelapse camera lurking on the kitchen roof. Stay tuned for a future video posting.

Work around the back is scheduled for 6 weeks but, given the current rate of progress, the guys may well be finished before then.