Today we subjected some friends to a 6-mile walk from Wotton Lodge to Ramshorn and back. It’s probably just as well they’re seasoned walkers because this was a 6-mile walk consisting of what seemed like 5 uphill miles and 1 downhill!

Now I’m a great believer in technology. As such I have all our walks downloaded to my phone, with GPS and super-duper quality OS maps. This way, it’s just impossible to get lost.
We may be temporarily unaware of our location – but we’re never lost!
This is all great, whilst we wander about in the middle of nowhere, right up to the point where the aged battery on my phone decides it’s had enough of powering all that technology and decides it needs a bit of a lie-down, followed by a long snooze.
This is somewhat unfortunate as anyone who knows me will tell you that I have the sense of direction of a kitten in a tumble dryer.

So there we are, in the middle of deepest, darkest Staffordshire, somewhere in the massive Wotton Estate, which is about the size of Wales, with no satnav and no map. Normally we would have run around in small circles, with our heads on fire, waiting for some divine intervention. Luckily, divine intervention came in the shape of our (reluctant) walking companion, who just happens to be an ex RAF fast jet navigator. There’s no need for all this technical wizardry for Barry. Despite having never visited the place before, his inbuilt sat nav has been tracking our progress since we set out, so he knows exactly where we are – and more importantly, where we need to go.
Even though I was adamant, when we got to the estate gates, that we needed to turn right to get back to the car, Barry insisted the gizmo in his head was telling him to turn left.

Which one of us was right? Well, Barry of course!
No wonder the Royal Air Force is the best in the world.

17th October 2014
We thought it would be nice to have a wander around the garden today. We were wrong.
It seems the inexorable slide of our land has continued. Not only that, but it would also appear to be accelerating its movement, ably assisted by gravity, towards to the bottom of the valley. I guess that’s what the Wooly Mammoths were experiencing as they observed their favourite glacier disappearing into the distance.
I wonder if there was a squirrel-like creature sitting on it, chasing an acorn?

Here’s a comparison of the builder’s attempt to defy the laws of gravity, versus what Mother Nature thinks the place should look like. 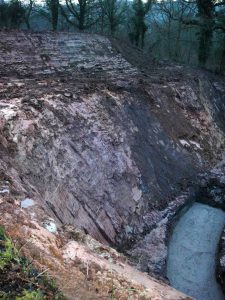 On the left (above) is what a near-vertical excavation in clay, over 10 metres deep, looks like when you’ve got your fingers crossed.

Below is what it looks like when some rain and a lot of gravity has had free reign for about 11 months. 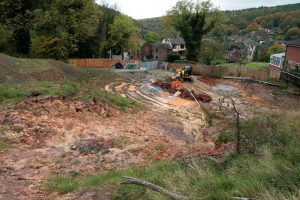 These two photos really were taken from about the same place, just pointing at a slightly different angle.

The movement of the land has also taken a toll on some of our kerbs.
The photo below shows what our once straight (not to mention level) kerb now looks like. 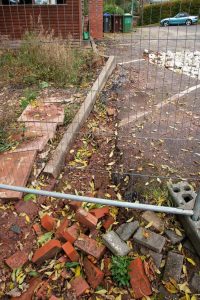 It’s actually moved by about 1 metre, which has had a somewhat alarming effect on the nearby pillar! 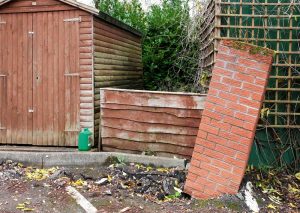 We may start taking bets on when it’s going to give up its brave struggle and fall over.

Around the corner, the block-paved drive has been stuck between a rock and a moving place. As such, it’s now about 1 metre narrower than it used to be, with the paviours being forced upwards into a mini-mountain range. Come to think of it, perhaps we should start inviting school children round to learn all about glaciers, terminal moraine and fold mountains. It’s all here in miniature! 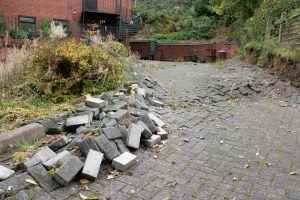 Still, there’s nothing to worry about. The experts are on the case …..

Project Planning. It’s All a Matter of Time

14th October 2014
In Pride and Prejudice, Jane Austen wrote: “It is a truth universally acknowledged, that a single man in possession of a good fortune, must be in want of a wife”.
Given the experiences a few decades working for British Airways has given me, I’ve always remembered a slightly different truism – namely “It is a truth universally acknowledged, that any project will expand to fill the time available to it”. Which brings me nicely on to the guilty parties, that are our insurers, the (insert expletive here) builders and their insurers and a bunch of boffins employed by same.

So eleven months on from the initial discovery that our world (or at least our very small part of it) was sliding inexorably into a large hole excavated by a bunch of idiots, we’re still waiting for something to happen. We shouldn’t be surprised, of course, given my earlier postulation, as the project code-named “Fix The Bloody Laurels” has no apparent end date.

This week we were visited by no less than 7 boffins, modelling dayglow jackets in very fetching yellow and orange. In fact, they could have easily been mistaken for a bunch of Tic Tacs 😉 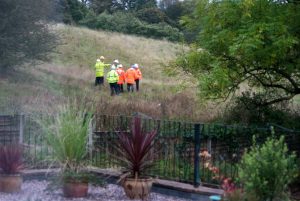 We’re led to believe the purpose of this boffin love-in was to finalise details surrounding project Fix The Bloody Laurels – the outcome of which was to decide they may start a permanent fix on the sinkhole, sometime in the next couple of weeks.
Unfortunately, the majority of the works – namely the piling – won’t start for a wee while yet, as they’re still waiting for the Elves of Safety to give their approval.
Given that builders historically don’t work over Christmas, or as the rest of us call it, December and January, we’re probably going to have to wait until 2015 before things even start. All of which means The Laurels probably won’t be opening before Summer 2015 🙁

7th October 2014
It seems the viewing public can’t get enough of sinkholes. Or so the TV companies seem to think.

Following our initial appearance on The Beeb back in April and the somewhat tenuous link to them on Channel 5’s Britain’s Worst Roads filmed in May, we had another TV crew arrive to film our holiness for Aunty Beeb’s Inside Out.
As such Mandii, the somewhat enigmatic producer, duly arrived with the frontman David Gregory-Kumar and cameraman Paul Hutchins.

Now, in Groundhog Day (one of my favourite films), ‘The talent in front of the camera’, played by Bill Murray, is fantastically self-absorbed, misanthropic and egotistical, whilst the cameraman and producer regard him with barely concealed disdain.

Clearly David, or DG-K as we’ll call him, hadn’t read the script in my head, as he was lovely. Paul (The Hutch) Hutchins and Two-eyed Mandii appeared to get on with him famously too.
So much for film scripts and preconceptions!

Anyhow, they did the usual, with DG-K chatting away, making us feel at ease, The Hutch eyeing up angles, lighting and sound, whilst Two-eyed Mandii tried to keep them on task.
During filming, DG-K complimented us on our performance in front of the camera, at which we point we boasted that we were old hands at this TV thing now. We could almost sense The Hutch zooming out at this point, to keep our growing heads in frame. 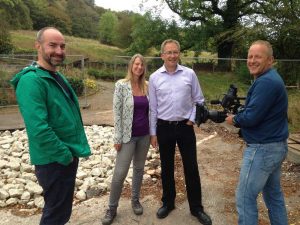 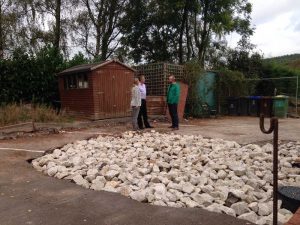 With the afternoon pressing on, the TV crew moved off to their next glamorous assignment somewhere else in The Midlands.
We’ll keep you posted when we know a transmission date.