Today we said adios to our new amigos, Nica and Ivan – pronounced Ewan. (That’s Ivan of course, not Nica).

The guys arrived from Tenerife around two weeks ago on the premise that, in return for a bed and three meals a day, they would provide us with a minimum of 5 hours work a day.
This is a surprisingly common arrangement that we’ve only recently stumbled across. In fact there are many websites, including Workaway, that enable this exchange to take place very easily.

This isn’t designed to be some kind of one-sided slavery trade, but an exercise in providing travellers an opportunity to learn about other countries’ customs and languages.
Nica and Ivan’s spoken English, by their own admission, wasn’t the best, but was clearly better than our Spanish. Initially we struggled to find the balance between speaking slowly enough for them to separate one word from another without sounding like your typical Brit-abroad, which commonly requires you to repeat the same word in increasing volumes until the ‘foreigner’ understands.

Luckily the advent of Google and other translation phone apps allows you to very quickly look up words that are new to either party. Having said that, there are clearly a large number of words that have no direct translation, which led to much merriment around the dinner table, although according to Helen there’s clearly an international ‘boy humour’ that transcends language, where men of all origins and ages are able to immediately understand questionable and bawdy humour, relying purely on hand and facial gestures.

One of the many tasks we had the boys attack was something I’d started last year. This was the overhauling our outside furniture, which required the cast iron frames to be rubbed down and painted and the wooden slats replaced, sanded, planed and stained in a fetching shade of mahogany.
As you can see from the photo below, our trabajadores achieved the desired results very nicely. 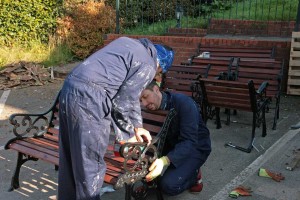 Whilst discussing international cuisine one evening I ventured that, if Spanish people only ate paella, what dish did they suspect the English lived on. The answer was very clear. Obviously we all had a Full English Breakfast every morning. Having cooked and served over 2,000 fry-ups last year, we’re probably not the best couple to advise on the likelihood of this. However, in a bid to prove our stereotypes wrong, Nica and Ivan offered to cook us an evening meal the following day. The speciality on offer? Why, Spanish Omelette of course!

Following another day of endeavour, we gathered in the kitchen, with our Spanish amigos to witness the creation of a proper omelette.
We never realised there was so much to it, but after an hour or so of separating egg whites, deep frying potatoes and onions and the creation of a tomato and basil salad that even I ate, we sat down to an extremely scrummy meal. 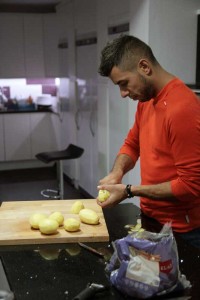 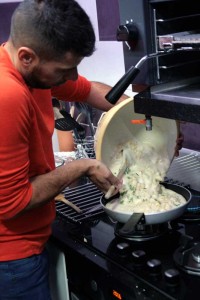 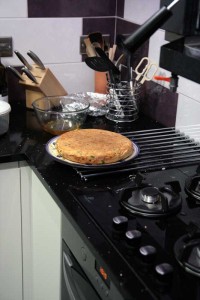 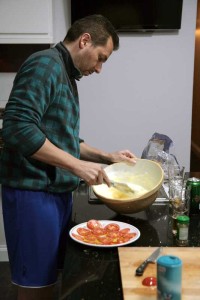 So, what did we learn from our experience?
Well two guys from Tenerife, whom we’ve never met before, can have a positive impact on our lives, by expanding our vocabulary (both English and Spanish), our minds and our horizons.
Vive la difference, as they don’t say in Spain.

In a few weeks we’ve got a couple of Argentinians arriving.
Let’s hope nobody mentions the war!

It seems oddly quiet around here at the moment. Quiet for The Laurels anyway. Work has all but stopped up here for now, as the MIBs concentrate on constructing the earth bund below us.
If you’re not sure what an earth bund is, as we weren’t, it’s basically a huge bank, constructed from steel and various types of stone and aggregate.

In conjunction with the upper and lower piling schemes, the bund, details of which you can see above, will protect two sides of the Idiot Builder’s site, the houses that will eventually be built below us and The Laurels.
So, if you’re in the market to buy a nice new £500,000 house in Oakamoor some time in the next 18 months, you’ll know what your back garden’s going to look like.

In the meantime, in preparation for repairing our place, another couple of trees have had to come down. This is either because their roots have been compromised by the work around them, or they’re in the way of additional groundworks that still need to take place.
This prompted the return of the Tree Fellers to carry out some more felling, revealing an even better view down the valley, enabling us to now see one of the village churches. 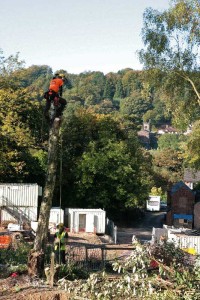 In the video below you can enjoy three things at once. The guys doing their thing, the MIBs uncovering a coal seam in the background and the emergence of some rather lovely cloud formations. What’s not to like?!


Stayed tuned for an update on Workawayers Ivan and Nica, our Spanish visitors.