How to Run a Luxury B&B

One of the reasons we decided to open a B&B in the first place, apart from a lack of knowing there are a lot of Idiot Builders around, was that we’d been to dozens of them over the years, so we knew how they worked from the customer’s perspective. We’d also discovered that they varied massively in being able to provide what it said on the tin – a bed and some breakfast.
How hard could it be?

Well, let us tell you if you want to do it properly, it’s actually quite challenging. That being so, even now when we go places, we tend to stay in a B&B if we can. This keeps us up to date with what our competitors are providing and also reminds us of some of the things we mustn’t ever do – like littering the place with paper doilies.
Not that we saw this lot as the competition of course, but we’d treated ourselves to a stay in an extremely decadent B&B located in Sandwich, on the banks of the River Stour, in Kent.

Sandwich is an ancient and interesting place. Not only is the sandwich (as in, ham and mayo on rye) named after John Montagu, the 4th Earl of Sandwich it’s also where, in 1255 the first captive elephant was landed in England. The poor beast then had to walk to the Tower of London where King Henry III had his zoo. Still, if Hannibal could get them over the Alps, a quick trip along the M2 couldn’t have been too troublesome!

The B&B in question was called The Salutation. Built in 1911 from an Edwin Lutyens design, who also happens to design the Cenotaph in Whitehall amongst other things, it’s a very imposing place as you can see. 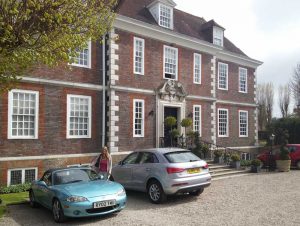 On entering the grand reception area we were shown around the downstairs lounge and breakfast room by a very competent and engaging young lady.

Those of you who watch really awful TV (like us) may recognise the room, that Helen is relaxing in, from Gogglebox. Those of you who have never heard of Gogglebox may well be better off not worrying about it too much, as it can be a tad coarse for sensitive ears. 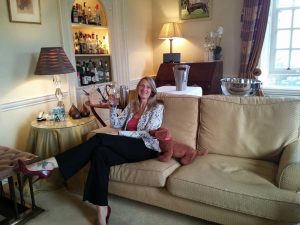 B&B tip number 2 – Buy high-quality carpets and keep a can of Vanish Carpet Cleaner in your drinks cabinet.

We were then shown to our room by the young lady and left to explore our expansive quarters.
It has to be said, I’ve lived in houses smaller than the footprint covered by the bedroom and ensuite, but remember you’re paying for the privilege of all this extra space. 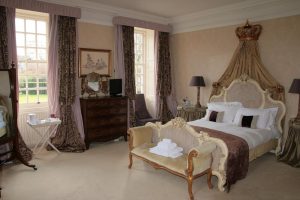 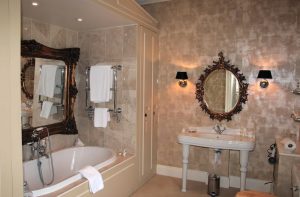 The bath was certainly big enough to fit a football team in, although I’m not sure Manchester United’s first-team squad would have appreciated the complimentary bubble bath.

You may well have noticed from the photos that the curtains adorning the full height windows are somewhat less than understated.
Apparently the style is called Leg of Mutton, which to us basically means there’s about 10 times more material than you actually need and they’re really big at the bottom. Seriously, the 5 pairs of silky, sumptuous curtains in our room would have cost the same as a nice new sports car! 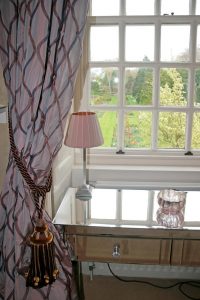 B&B tip number 4 – If you’re going to charge people a small fortune to stay, you better have something impressive to back it up.

So there you have it. If you want to run a posh B&B, you need to make sure you’ve got a couple of million in the bank to buy it in the first place and then you’ll need to convince your guests they’re getting value for money.

How hard can it be?

← Cycling the Tissington Trail ← A Walk Around Ilam (9 Miles)