Around 10 months ago we decided our fruit trees needed a bit of a prune, as they were in danger of taking over the place. In fact, every time one of us walked out of the back door, we banged our heads on some low hanging fruit (a saying beloved by corporate bods around the world).
Unfortunately the word prune seems to have two different meanings at The Laurels. Helen’s definition seems to have meant, trim a few twigs and remove the odd leaf. My definition, on the other hand, means raze the thing to the ground and see if it ever grows again. Given that I was the one carrying out the work, you can probably guess which kind of pruning was actually carried out.

During the Winter, the aforementioned pruned trees stood, bereft of any leaves, or branches for that matter, looking like huge wooden scarecrows, threatening to scare off birds, animals and small children.

Fast forward 3 or 4 months and, much to Helen’s surprise, the trees burst into life, shooting small buds skywards, producing small branches, leaves, flowers and then fruit!
Of course I was always confident my pruning technique would reap rewards, although even I have to admit I thought it would be a year or two before they actually produced anything you could eat.

Just to prove a point, on the way back from a stroll around the village, we plucked some blackberries off the hedge by the road, carefully collecting them in a ‘bag’ Helen managed to fashion out of a folded up piece of paper.
Once home, we removed some of our crop of apples from the tree, ready to stick in a pie with the previously purloined blackberries. 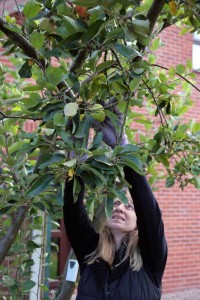 Once back in the kitchen, we had to peel the apples before their impending stewing. I had this really good idea of skewering the apples with a drill bit and inserting it into a battery drill. This would then enable me to rotate the apples at high(ish) speed and remove the peel with a stationary potato peeler. What could possibly go wrong?

Having left bits of apple peel splattered all over the kitchen and half peeled apples in the sink, I left Helen to perform her magic with fruit, sugar, flour, oats and stuff to rustle up a crumble.
You can appreciate the full majesty of this creation in the photo below; 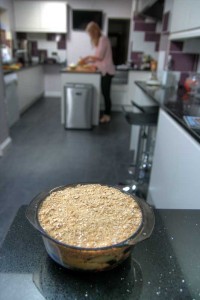 In other news, our Work-Awayers have now arrived. These are guys we contacted via a website that allows people (usually from abroad) to stay in your home whilst, in exchange for a bed and some food, provide you with 5 hours of work in return.
Ivan and Nica, a young couple of guys from Spain, start work tomorrow.

The process of encircling the place with steel and concrete continues apace.
The MIBs have been super busy, aided by a specialist crew of rebar installation guys, which we guess makes them the RIGs.
They’ve been brought in to assemble the tons of steel reinforcement rods into an intricate pattern, resembling huge Shredded Wheat, held together with twiddly bits of wire.

You can enjoy some of the RIGs work below, in the usual Benny Hill style, albeit minus the daft music.

(Do make sure you benefit from the full screen experience by clicking on the [ ] symbol at the bottom right of the window.)

With the benefit of being up close and personal, you can really appreciate the work that goes into constructing a reinforced concrete slab. 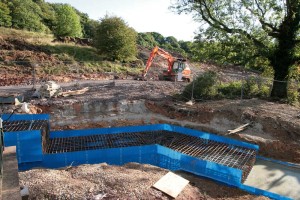 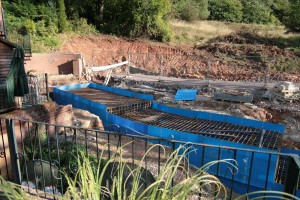 One of the benefits of adding this amount of rebar, apart from improving the tensile strength of the concrete of course, is (allegedly) the ability to bury the bodies of any competing RIGs, that may be trying to elbow into your territory.

You can see in the photo below, the MIBs and the RIGs are peering into the freshly poured concrete, possibly saying something like “Ah Louigi, we had to make him a offer he couldn’t refuse. He’s now sleeping with the fishes.” 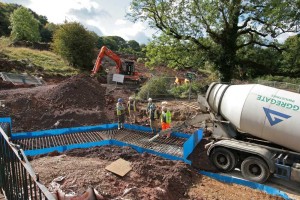 Of course, it would sound better if they were talking with their mouths stuffed full cotton wool.

Given we’re still around 6 months from reopening, we’ve decided to embark on a new venture.
The Laurels Water Park! (Cue much fanfare and flashing of lights).

This is a first around here – if you don’t count Splash Landings at Alton Towers, or Waterworld in Stoke, of course.
The construction of our ‘Park’ started by accident really. In fact, it only really came to fruition after a particularly rainy day. Still, mighty oaks, from little acorns grow, as the saying goes.

As a result, we’re pleased to be able to show you the very first photo of our fledgling new attraction… 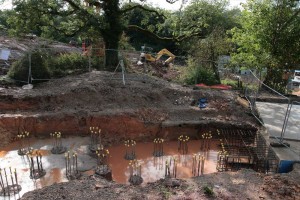 The real beauty of this scheme, is that it’s entirely scalable, as businessmen in shiny ties are fond of saying. We’re starting relatively small, with the Lower Pool, but that will soon be joined by the Middle and Upper pools, very soon. Don’t be put off by the colour of the water, by the way. This is in fact, liquid chocolate, specially imported from the finest Swiss Chocolatiers.

In the photo below you can see the beginnings of the larger Middle Pool. As befits a pool designed for the more discerning visitor, this premiere location benefits from fabulous views across the Staffordshire Countryside. 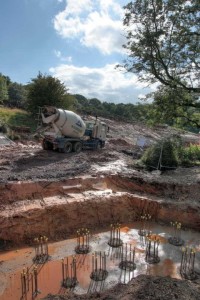 We’ve even included some mini-islands, topped with little yellow hats, which allow the more athletic bather to swim in multiple figure-of-eight patterns. (We think of everything you know).

The pièce de résistance, as they say in Le France, are the specially moulded side slides. These are sculpted from pure concrete to allow our visitors to enter the pools at any point. None of this, start at the top and exit at the bottom lark for our guests!
You can see our MIBs carefully constructing the perfectly shaped forms below; 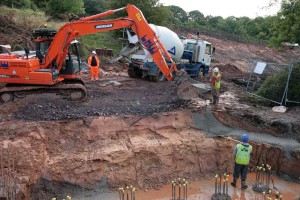 At the time of going to press, the most luxurious ‘Upper Pool’ is still under construction. Our MIBs are still sculpting the perfect environment in which our really posh guests can lord themselves above the plebs in the pools below. Currently, we haven’t worked out how to get the water from the bottom, back to the top, although we may just restrict entry to The Laurels Water Park to very rainy days.

All the guys need to do now, is figure out how to get the cement mixer out of the field. 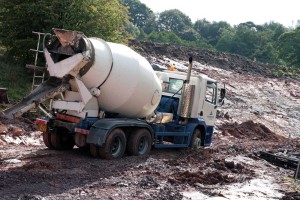 The Piles Return. Did Someone Say Preparation H?

We can’t look out the window now without seeing massive changes happening all around us. This week sees the return of the Boring Guys and their enormous piling machine, ready and able to insert another several hundred tonnes of steel and concrete into the ground.

This is Phase 2 of the master plan – The Lower Piling Scheme. Although, if Plutus hadn’t had his way, Phase 2 would have actually been Phase 1, as the original Phase 2 was the upper piling scheme and there’s little point in doing Phase 2 before Phase 1 unless someone puts a spanner in the works.
Having said that, the MIBs and the Boring Guys are now working simultaneously on both Phases. Confused? You will be.

The MIBs have been busily uncovering the piles that were installed some months ago, to allow Mr Cropper to return, before the final steel reinforcement and concrete can be put in place. 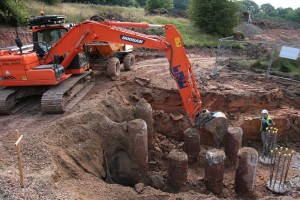 In the photo above you can see one of our MIBs observing the emergence of our concrete monoliths.
To avoid any confusion, it’s useful to know that he’s not unusually short, it’s just that these piles are bloody enormous – and just like icebergs, the majority of these big boys sits below the surface. Which is probably just as well, because they’d be of little use if they only poked into the ground by a metre or two. 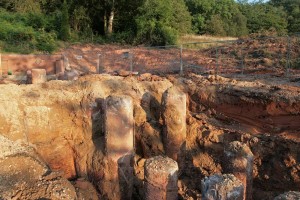 The photo above may not be readily recognisable (even by us) but it’s actually what’s left of our upper drive and patio area, where our guests used to relax and enjoy views across the countryside.

Suffice to say, it’ll be looking a whole lot better when we reopen!

Returning to our (not very) regular focus on crank calls, we received an ingenious variation on the usual sales call recently.
The first clue that I’m about to waste several minutes of my life, is the caller ID announcing the call is from ‘International‘.
Despite my reservations, I pick up the phone anyway and announce to the caller that they’ve reached The Laurels and that I’m hoping to help them in some way.

As in so many of these calls, I’m met with a very long pause, during which I usually consider hanging up. Unfortunately, just as I’m about to save myself from some pain and replace the receiver, a distant voice enquires in a voice thick with the accent of the Indian sub continent, “Hello, is that the owner of The Laurels?“

Tempting as it is to suggest that I’m actually only the toilet cleaner and that they should call back later, I always confess to the aforementioned accusation.
“My name is Frank” says the voice on the other end.
Now, I’m no expert on sales, but if someone opens a dialogue with an outright lie, it surely doesn’t predispose the other person to trust what comes next as anything other than another lie.
I’ve worked with many people whose families originate from the Indian sub continent, and consider many of them to be my friends, but I’ve never met a Frank. Lots of Sukwhinders, Gagandeeps, or Navjeevs, but never a Frank.

Surely those that propagate these calls understand that those of us living in the UK don’t still expect everyone to be called George, Mildred, Ernest, or even Frank?

Anyway, Frank (or whatever his name really is) had an even more imaginative approach to sales than his pseudonym.
“I’m ringing to tell you that my colleague is in your area. He’ll be able to tell you how much you will save on your gas and electricity prices. What time should he call to meet you?” He enquired.

I’m afraid I did actually laugh out loud, but once I’d recovered my composure I thanked him for his offer, refused it, then bade him farewell.
Imagine if we took the same approach. We could randomly ring people up and say something like, “Hello, my name is Rumpelstiltskin. I’m pleased to tell you that we have a B&B in the lovely village of Oakamoor. What date can I book you in for?“