It’s probably just as well I’m not writing this a couple of days ago, on the 1st April, as no one would have believed it. (I think I may be mixing my past and present tenses there, but you know what I mean).

Yesterday the boring guys had been continuing to drill various holes all over the place to ascertain the extent of the slip, as before.
The additional holes, around the really deep one, had been finished and appeared to show the anomaly was probably around 6 or 7ft in diameter.

As a result, they had started something I’d rarely seen any builder do. They were cleaning up after themselves!
All the mud and accumulated rubbish were being swept and piled up and their skip was filling rapidly. The large foundation-discovering hole had also been filled in and tarmacked over to a lovely smooth finish. If we stared at that small bit long enough, we could almost imagine what our drive used to look like.

Unfortunately, things got kinda serious today.
First thing this morning, it was apparent something had changed a bit.
Around the first deep boring hole, the tarmac had a large shallow, perfectly circular depression in it. Almost as if the foot of a large spaceship and landed there during the night – found no one worthy of probing, and disappeared again.

Somewhat alarmingly, within just a few minutes, that depression had turned into quite a sizeable hole, about 18″ in diameter, under which we could see, and hear, rather a large amount of water. 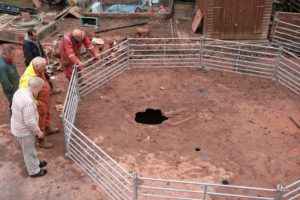 Over the next 2 hours, the hole grew inexorably into this ….. 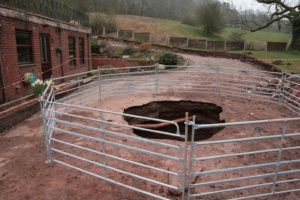 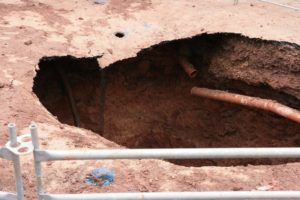 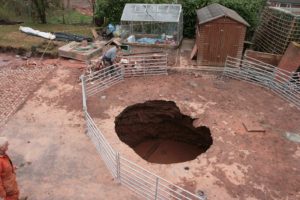 You can see a timelapse video of it appearing below;

As I write, the hole has actually got a fair bit larger than shown in the photos above, with the added bonus that we can now see various large planks of wood floating around. Thoughts of old mine shafts etc have passed through my mind on more than one occasion today. Either that, or it was the remnants of an old escape tunnel. We momentarily looked across the fields to see if Steve McQueen was making his escape on an old Triumph scrambler, but no, all that could be heard was the ominous sploshing of water as another chunk of clay fell into the hole.

The only good news received today was the response from the NFU and the assembled boffins. Inasmuch as they’ve arranged for the hole to be filled in tomorrow. Now that’s what I call a speedy response!

Apart from that, I’ll be giving a radio interview tomorrow morning at 07:30 on BBC Radio Stoke and the BBC West Midlands tele people are also coming over to poke a camera in our faces. Luckily they’re waiting until mid-morning so we’ll look slightly more human by then, assuming we get any kind of sleep!
Let’s just hope no one asks Helen how she feels 😉

April 4th 2014
Andy Warhol once said, “In the future, everyone will have their 15 minutes of fame”.
Well, having had 15 minutes and more today, we can safely say it’s overrated. Mind you, he also said “You’d be surprised how many people want to hang an electric chair on their living-room wall….” so what did he know!

We hardly slept a wink last night, although we’d taken the precaution of sleeping in one of the guest rooms, as far from ‘The Hole’ as we could, every slight noise had us wondering if we were about to tip into oblivion.
Nevertheless, we got up at the crack of dawn with the expectation of having a radio mic shoved in our faces but, for some ‘technical reasons’, the radio heads didn’t turn up, which was a wee bit irksome.

In the meantime, the brief today, for the assembled boffins was to fill our hole with a large number of rocks, in an attempt to stabilise it. 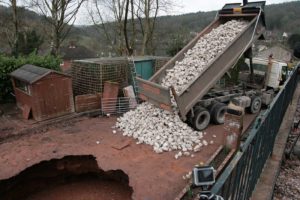 This was the first 20-ton lorry load of rock which disappeared into the hole.
After 60 tons had been tipped in, there had been quite a distinct change – The quarry owner was £900 + VAT better off.

Sometime later I was interviewed over the phone and a mostly accurate representation of what I’d said was stuck on the Beeb’s website.
This was closely followed by the TV crew turning up, suggesting we did a live piece to the camera. 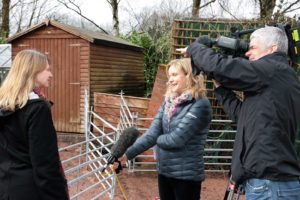 What I can tell you is, having had a TV camera shoved so close to my face it feels like I’d cover it in spittle, it’s a little unnerving. I can also say, quite categorically, that the camera doesn’t put on 10 pounds, it puts on at least 20! Jeepers I looked fat. Plus the fact that, when watching it back later, it seemed as though someone had, through the magic of CGI, replaced me with my Dad. When did I get so grey?!
It has to be said Helen fared a lot better than me, although she’d clearly had her voice electronically altered so no one at the DWP could recognise her.

We were hoping our main sewage drain would survive it’s isolation from anything solid (too many currys perhaps?), as it hung on manfully to its precarious position in the hole… 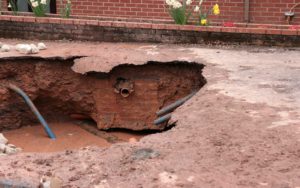 … but alas, as I started to write this nonsense there was an extremely impressive SPLOSH as it disconnected from its pipes and made a bid for freedom in the depths of muddy water below it.
That’ll be us in the sh*t tomorrow then.

The other thing that became apparent today is. We have insane neighbours! 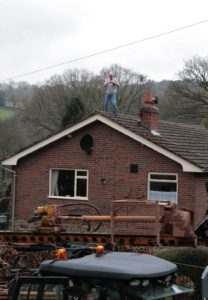 April 6th 2014
What a difference a day makes.
“You could write a song about that”, I hear you cry – and I doubt there are fewer things to more accurately describe yesterday’s events. Less than 24hrs after the bottom seemed have dropped out of our world, we were feeling almost chipper again. At 07:30 two, 20-tonne lorry loads of stone beep beeped their way backwards up our drive (thankfully missing all the cars we’d had to move down there).

You can see from the photo below that the first three loads had barely broken the water’s surface, in one corner and the hole had now reached the wall. 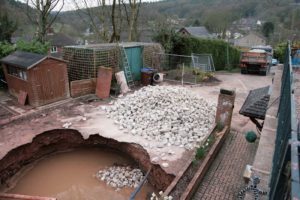 A sweepstake was immediately started on the total number of loads needed to fill the hole. Being an optimistic soul Helen suggested a total of six. Being a man, and therefore surely knowing more about stones and holes than Helen, I suggested a total of nine would do it. 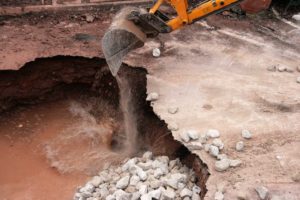 As the JCB driver expertly scooped the rocks up and dropped them carefully(ish) into the hole, most of them seemed to roll off the small mound and disappear into the depths. As I began to feel even more confident about my prediction, thoughts of Danny Valinski, with rocks falling onto his head, briefly popped into my mind.
A few hours later two more massive piles of stone had been delivered. The drivers now confident enough to reverse right up to the once ominous void. 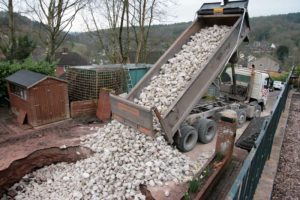 Another couple of hours later, the JCB man was even driving on top of the deposited stones and bashing them down with his bucket. 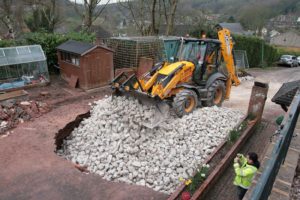 Confidence grew rapidly that the ground was once again somewhere safe to walk, without fear it would open up and drop us into watery oblivion without warning.

Those of you with a Masters degree in Applied Mathematics can’t fail to have noticed that only seven loads (140 tonnes) of stone went into the hole, which only serves to illustrate that women clearly know more about stones and holes than men.

Thanks to the amazing efforts of our insurers, the on-site geotechnical engineers and our local builder Dave, we no longer have a sinkhole but do have a main sewer again. Yippee.

April 10th 2014
The carpark resembled well, a carpark today, with the boring men, one of the original boffins and two new ones, both called Steve who apparently excel in hole filling, turned up early.

We’re told the plan to inject the concrete gloop into the hole will commence after Easter. It can’t come soon enough, as far as we’re concerned. One less thing to worry about.

I’m sure in several thousand years time, the archaeological experts of the time will discover this massive concrete and rock column and wonder what the hell it was there for.
No doubt they’ll postulate that, as the column aligns with Mercury, Uranus and the Sun during one day in April, the ancients (that’s us) used to worship at this altar to pay thanks for the arrival of Spring. Either that or they’ll go “Bloody hell, that must have been a big hole!”

In the meantime, everything else is still on the move. 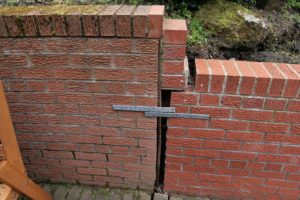 In case you’re wondering what the horizontal straps on the wall are for. They’re to give us a quick and easy indication of how far things have moved. Given that it’s moved another 13 mm in the last week, we’re hoping rather a lot of concrete turns up pretty sharpish.

← Test Bore Holes Begin ← Blowing The Cobwebs Away in Staffordshire