What to do on a rainy day? That’s the question we asked ourselves. So in a bid to pass on some valuable help to our even more valuable customers, we decided to try out a few suggestions ourselves.

Speedwell Cavern is about an hour from us, so probably on the limit of how far you’d want to travel, but it seemed as good a place as any to start with – especially as we wanted to pop into Bakewell and pick up some genuine Tart anyway.

The Cavern itself is reached by boat, through a flooded tunnel, about 200 meters below the surface of the hill. You’re then promised a “..cathedral-like cavern containing the awesome Bottomless Pit – a huge subterranean lake”.

Being in the UK, it’s obvious the first thing that’s going to tax your patience, is the queue. In reality, it’s probably the weather, but we’ve already covered that.
So, given that it was actually drizzling, windy and freezing cold we were hoping to find a short one. The queue that is.
Speedwell Cavern has an interesting concept in this respect. Firstly you have to go into a small shop, join a large queue, then pay for your tickets, whilst the crowd who’ve just done the tour are forced to exit through the gift shop too. The only benefit of this is the fact the shop is nice and warm.
You then have to join another queue outside, under a ‘shelter’, which is neither wind nor rain friendly.
Having years of queuing experience between us, we decided to split up. Helen did the warm bit and purchased the tickets, whilst I jumped on the end of the reasonably short queue out in the cold.
Helen joined me outside eventually, expecting a wait of only 20 minutes. Unfortunately, whilst we were stood there, a large number of very un-British Brits arrived and “joined their friends” in the queue in front of us. Being British, we didn’t complain out loud of course but merely mumbled furiously under our breath. As if that was magically going to make any difference.

Some 60 minutes later, we dragged our freezing bodies inside, donned our safety helmets – both wearing them at a jaunty angle of course, and descended the 105(ish) steps into the gloom. I say ‘ish’ because the sign outside says there are 105 steps, but the sign inside informs us there’s actually 106. Maybe it’s a Tardis thing….
I wasn’t at all surprised when Helen confessed she’d actually bothered counting them on our way back up. 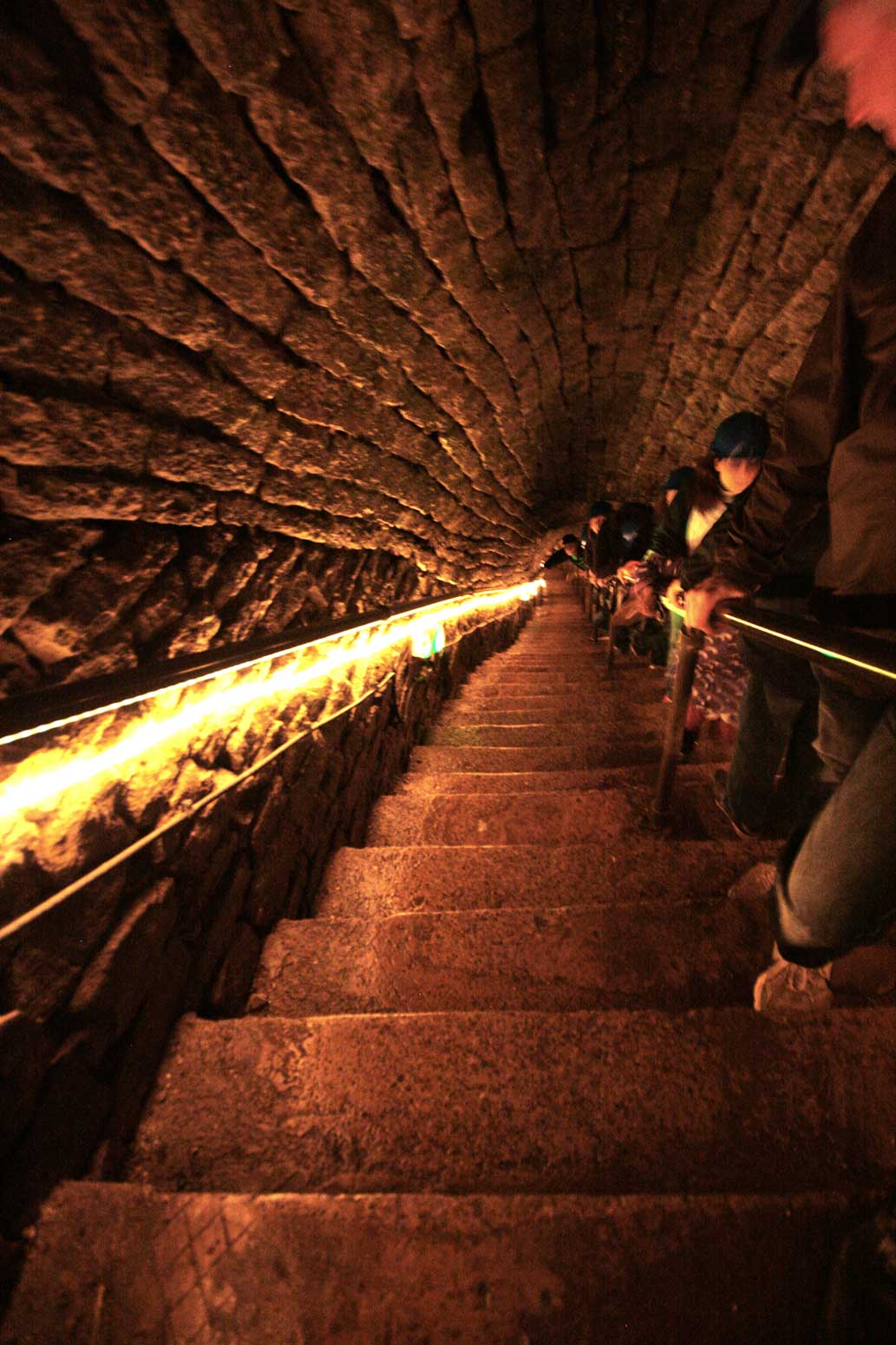 So, what did we think of our underground trip on a boat?

1. Well, I think it’s fair to say, anyone over 6ft would very probably come back with neck and backache from bending over all the time.
2. The “cathedral-like cavern” is certainly impressive and our guide was very friendly and amusing.
3. The huge subterranean lake, atop the Bottomless Pit, is actually only 34ft deep. 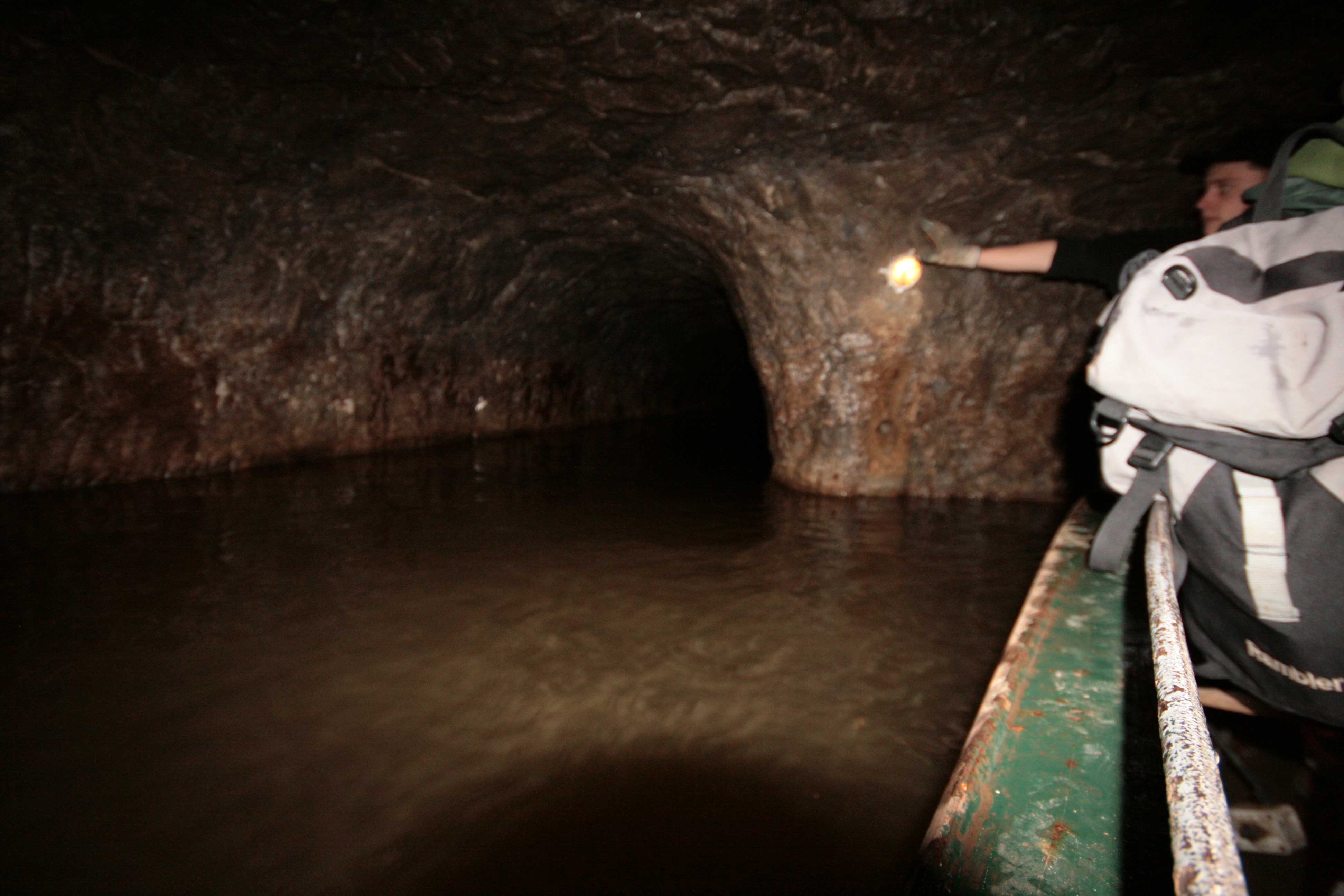 Not a great photo.
But it was very dark!

The thing I enjoyed most was our guide recounting some of the more random questions he’d been asked while working down there. Two of my personal favourites being – “Is it darker down here at night?” and “As I’m really tall, can I take my hat off as it keeps hitting the ceiling?”

In case you were wondering – there were 106 steps