If you’ve been to Alton Towers before, you’ve probably got your own hacks that work for you. If you’ve never been before don’t forget to have a look at our top tips first. 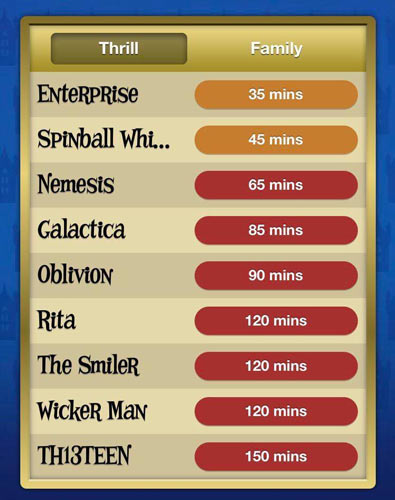 Picture the situation, if you will. You’ve arrived at Alton Towers with little Jonny who, being only 4, is super excited by the prospect of going to CBeebies. That’s great, You’re all certain to have a fab time, even if he’s bound to drop his ice cream at some point, throw a strop and burst into tears. Still, there’s always someone dressed up as one of his favourite characters to soothe his fevered brow – always assuming he’s not terrified by someone dressed up in a huge costume lunging silently at him. But hey, that’s what family days out are all about!

But what if you’ve both still got a hankering for a go on The Smiler? You’re not going to queue up for – let’s face it, quite a long time (unless you go on a soggy Tuesday in late April), enjoy being spun around 14 times, then say to your significant other. “OK cool, thanks for looking after little Jonny, let’s go back to see Postman Pat and his black and white cat” Well, you could say that, but at this point, your significant other may well reply along the lines of “You selfish bastard, I’ve just stood around for 90 minutes with little Jonny, trying to stop him eating dirt, and now I don’t even get a ride on The Smiler?!”

Luckily, Alton Towers have already thought this through, enabling you both to get that ride on The Smiler, or Wicker Man or whatever spinny-aroundness takes your fancy.
How does it work? Well, it’s pretty fiendish in its simplicity (the best ways of doing things always are). Just pop along to the Resort Box Office near the main entrance on Towers Street and pick up your Parent Queue Share Pass. Now, assume you’re Parent One and your significant other is Parent Two.
Parent One queues up in the usual way and ensures that the pass is punched by a ride host. Parent Two then meets Parent One after they’ve enjoyed being spun around in circles and takes the pass to the ride host via the access point, (and this is the important bit) thereby entering the ride at the front of the queue. This ensures that little Jonny is not left unaccompanied (tempting as that may be) and that you can both still enjoy your favourite rides.

Have you got any genius Alton Towers hacks you can share with us?
Let us know in the comments below.