Where is the Manifold Way?

If you have your own bikes, the best place to park is in the Peak District Waterhouses Car Park. This is just behind Ye Olde Crown Hotel on the A523. If you use the what3words app, you can’t fail to find it, or anything else for that matter.
Bear in mind the car park is pay and display and only takes cash, so make sure you’ve got a few quid to feed the machine before you set off.

Once you’ve paid your parking fee, set off past the old goods shed and head along towards the cycle track here.

If you’re like us, you prefer your cycling to be an opportunity to explore some amazing countryside, visit a pub or teashop and spend a few hours enjoying the view, without expending too much in the way of excess energy.

As luck would have it, The Laurels B&B is in the middle of an area that has a fascinating industrial past, resulting in a large number of disused railway lines crisscrossing the countryside. This is good, because we’re also surrounded by a large number of dirty great hills, and this certainly does not fit our requirements when it comes to expending excess energy. 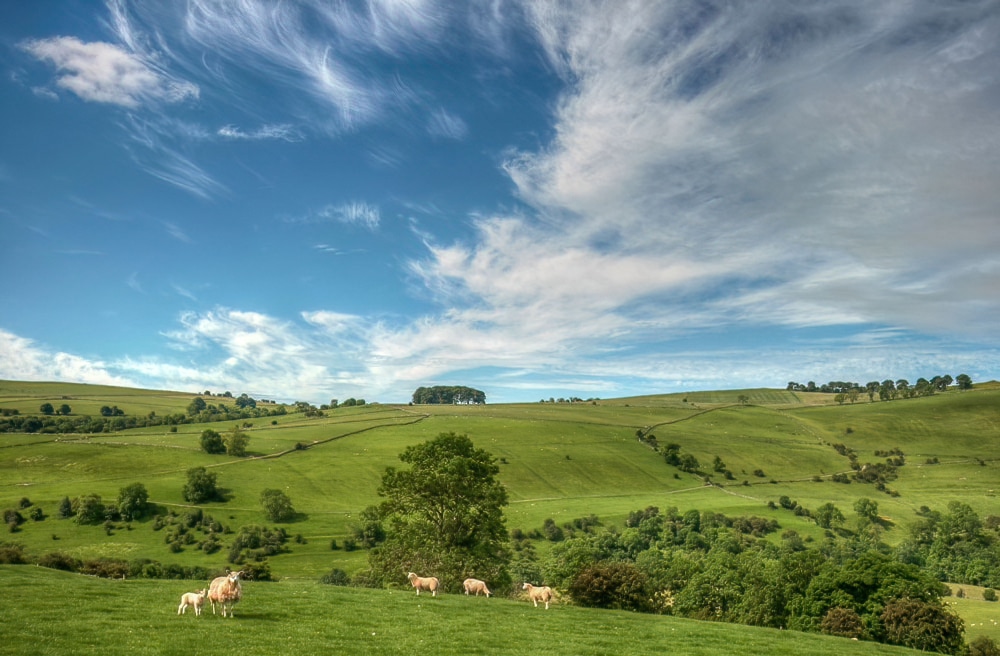 Just a short ten-minute drive from us is the start of the Manifold Way. If you’re into geology, it was formed about 325 million years ago by the erosive effects of water on the Carboniferous Limestone plateau, when Britain lay close to the Equator. If you’re not – it’s just a really fantastic place to visit because it looks nice.

This 9-mile long track is perfect for cycling, insomuch as it provides a mostly good surface, is relatively flat and provides for that most important of needs, the aforementioned tea and cake.

In the main, the track runs along an old railway line. It was a 2′ 6″ narrow gauge line that ran from about 1904, closing in 1934. It was normally used for transporting milk and coal, but it has been known to carry a large number of passengers in the coal trucks for special occasions. I dare say the Elves of Safety would have a blue fit over that today.
The Leek and Manifold Valley Light Railway, as it was known, terminated at Waterhouses at one end and Hulme End at the other. 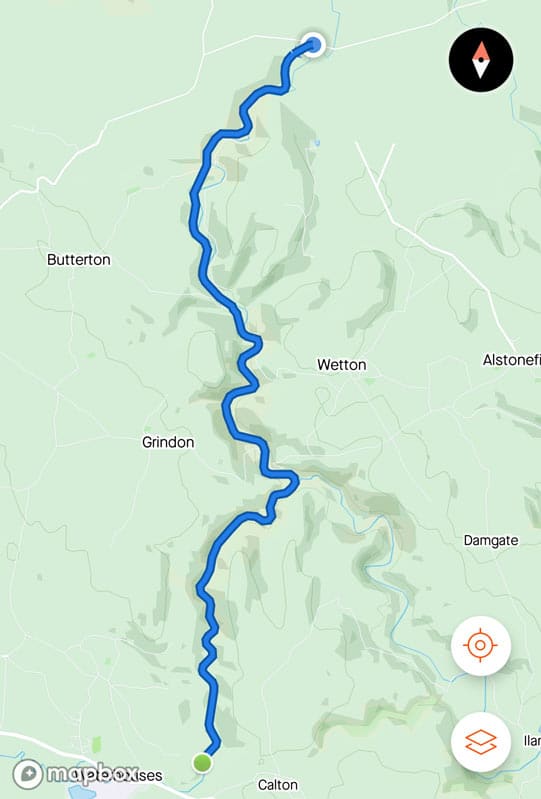 On the day we decided to cycle the path it was a warm and breezy afternoon in early June. Just perfect for a leisurely trip along the meandering route. The path is surprisingly wiggly as it crosses and re-crosses the River Hamps and the River Manifold. I reckon you cross the rivers about 15 times before you reach Hulme End.  If you can be bothered, why not have a count and let me know.

Although all of the cycleway is tarmacked, the initial couple of miles are a little bumpy, suffering from a few minor potholes and a rippling effect along the surface. This is noticeable but not too uncomfortable, although it does give you the opportunity to speak in a silly voice while the bumps make you sound like you’re sitting on a washing machine during the full spin mode.

In no time at all, you will reach Thor’s Cave. This sits in a massive limestone outcrop about 180ft above the path and used to be occupied in Stone Age times. It’s well worth the climb up to see inside.

Just chain your bikes up to the nearby wooden bridge and make the climb. Once inside you get an amazing view along the cycle path and the Manifold Valley. If you’re really brave (or stupid like us) you can climb onto the very top of the cliff and dangle your feet over the edge, watching the crows circle below you.

Helen doesn’t suffer from vertigo as I do, but she does suffer from what we call downigo. This means she’s quite happy to stand on the edge of a 4,000ft drop like we did at the Grand Canyon, but she’s terrified of going down really steep steps. I like to think of this as natural justice.

Check out the video (below) we created ages ago, and you’ll get the full benefit of the stupidity of standing quite so close to the edge. (Fast forward to 2:04 if you’re easily bored.)

Having satisfied our need for a bit of adrenaline, we walked back to the bikes and headed off once more down the trail.

After a bit more cycling we reached the lovely, picturesque Wetton Mill, where you’ll find the tea rooms. Set next to a lovely old bridge that crosses the River Manifold you can stop for tea and cake, or just sit by the water and feed the ducks. 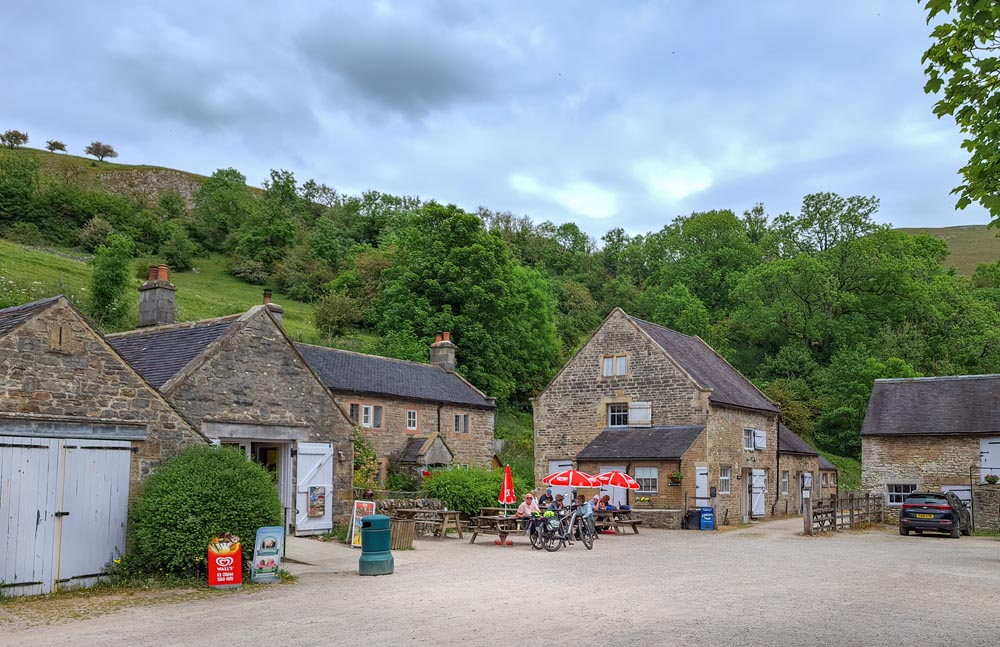 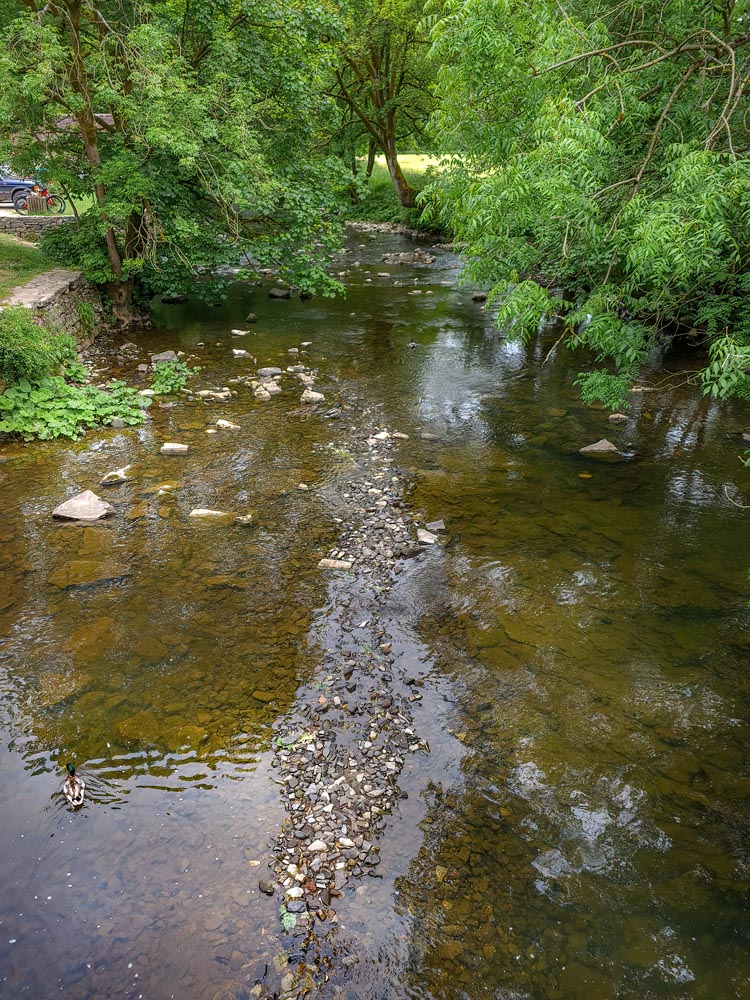 On the trail, you’ll join a couple of bits of road, although that description belies the fact that hardly anyone drives down there, as it’s very narrow, so you don’t have to worry too much about traffic.

If you pick the “higher” of the two parallel paths near the bridge, there’s also a small ford which kids (and us) can have endless fun cycling through, or take the time to have a little paddle. 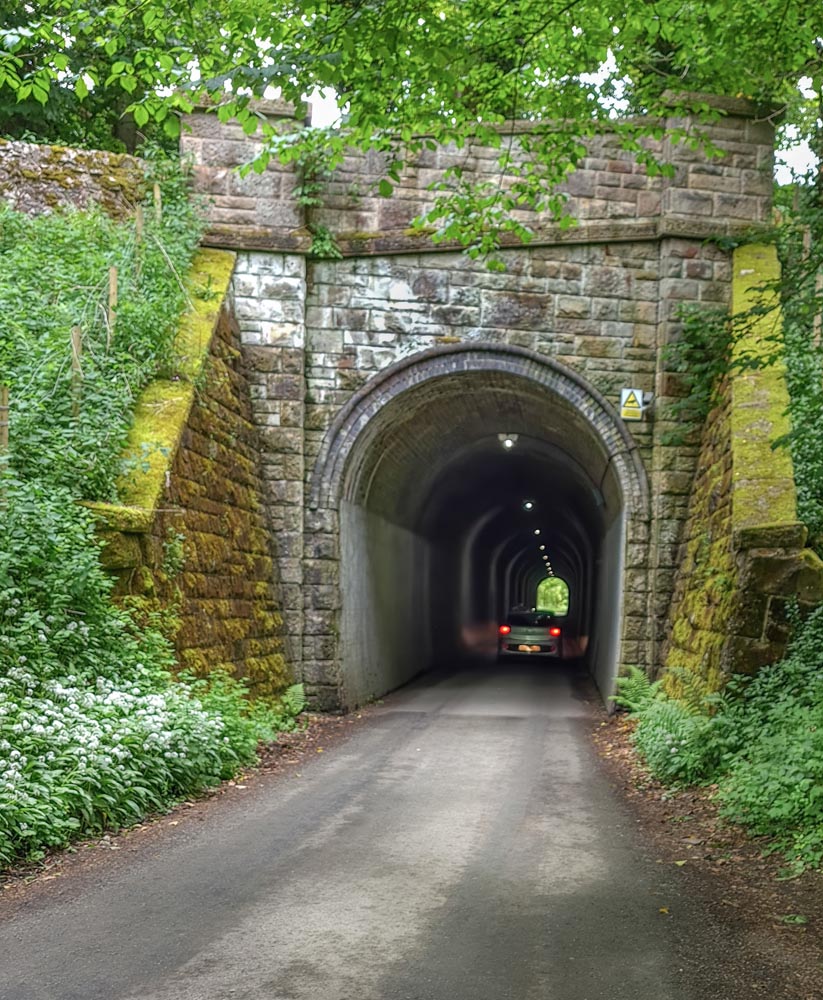 One of the other fun bits of this trail is navigating the Swainsly Tunnel.  It was built at the insistence of Sir Thomas Wardle, an L&MVLR director, so that the view from nearby Swainsley Hall should not be spoilt.

Inside the tunnel, there are several pedestrian refuges built into the side walls. These are useful if you’re walking along the tunnel to save yourself from getting crushed by a large vehicle, but I’m not sure whether there’s room for you and your bike in the refuge or not. In this case, you’re better off doing what we do and howl like mad buggers as you cycle along, just to alert any oncoming vehicles!

Once you’ve navigated the tunnel without serious injury, loss of limb, or been frozen to death by the weird microclimate within, you’re on to Hulme End at the end of the line.

There’s another tea shop here so you can top up and empty as you see fit. Alternatively, you could cycle around the corner to the Manifold Inn and grab a proper meal, if that takes your fancy, just in case you’ve become hungry during your ride.

It was our intention, once fully fed and watered to take a leisurely cycle back to the carpark, stopping to take a few photos and admiring the early summer flowers. 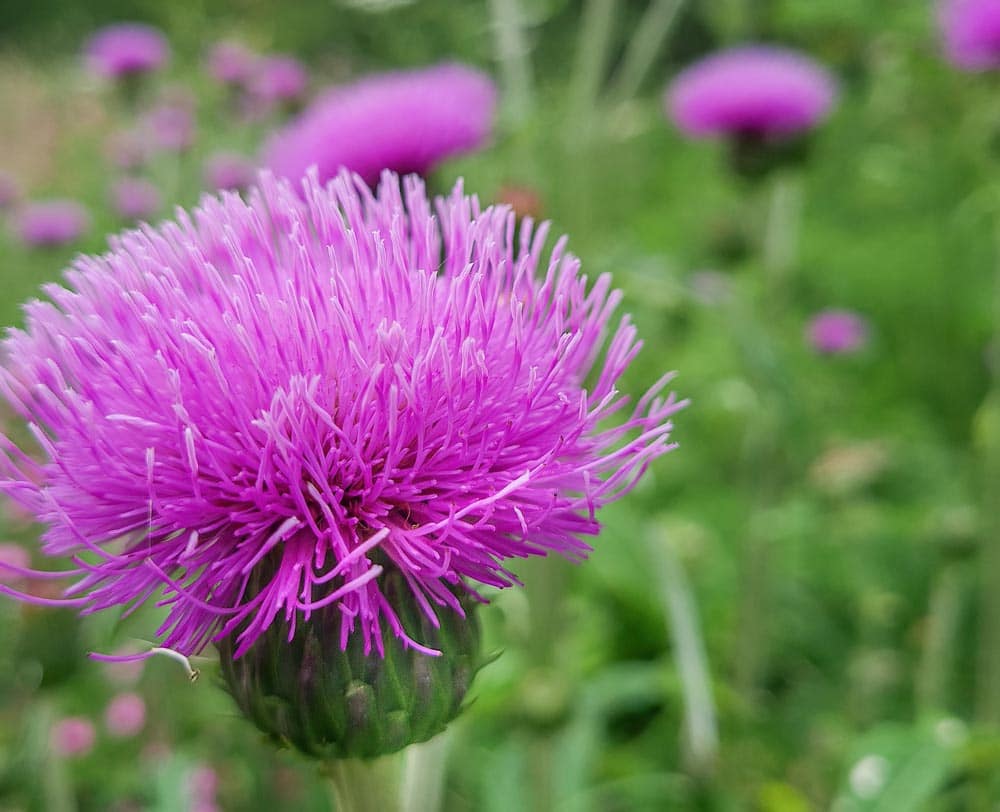 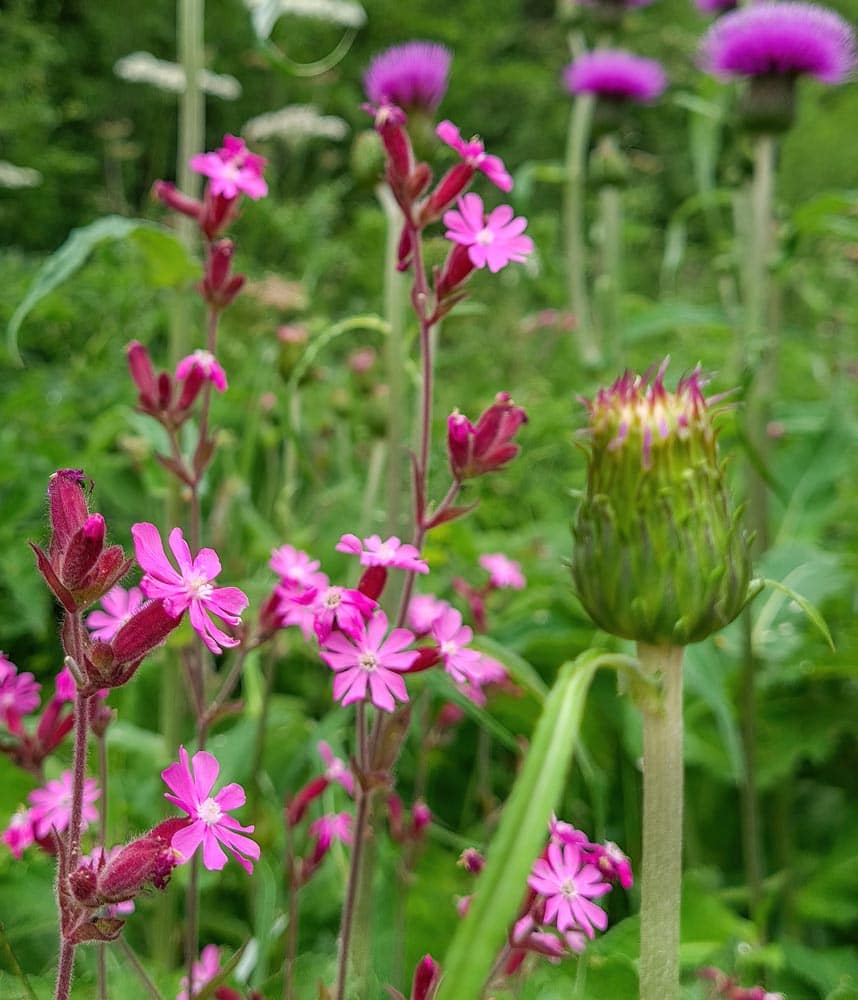 One thing that we did want to do, but failed, was to find out where the river disappears to. As illustrated by the photo below, except in very wet weather the river bed becomes completely dry somewhere south of Wetton Mill and doesn’t reappear until it reaches the grounds of Ilam Hall, where you can see it emerge from the rocks.

The Manifold’s only tributary, the river Hamps also flows underground through a series of caves and subterranean passages. 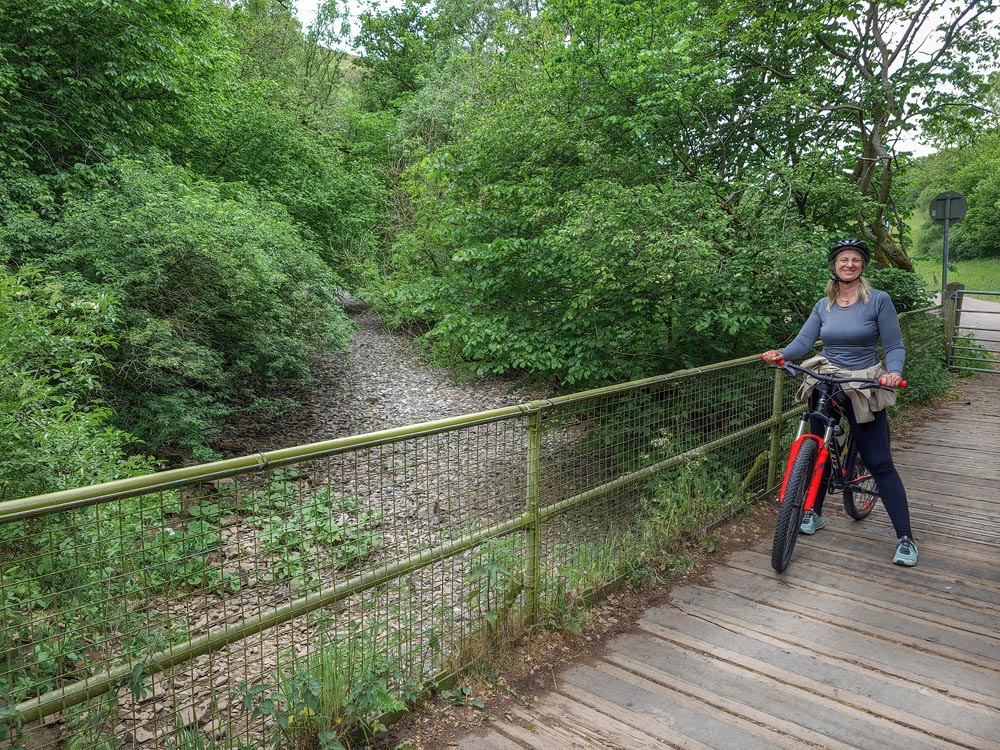 As you can see from the photo above, Helen had become quite warm during her exertions, so had decided to tie her very new coat around her waist, in an effort to cool down. The trouble with that of course is that she didn’t account for the turbulence she was creating, causing her coat to balloon out and flap around like she had a pair of Batman wings. This was mildly amusing me, riding behind, right up to the point where the coat flapped into the back wheel where it was promptly eaten by the chain, before becoming well and truly snagged in the rear brake.
This may not have been an issue a few decades ago, given that bike brakes, as you know, were just blocks of rubber that squeezed onto the wheel rim in an effort to slow you down. Mostly, these worked admirably, apart from when it rained, when they offered about as much stopping power as King Kenute, stood vainly on the beach.
Now, of course, we have super-duper disc brakes, that can stop you on a sixpence, and that’s just what they did. With the coat jammed between the calliper and the rear wheel disc brake, the wheel locked up solid and Helen came to a sudden but graceful, sideways halt. 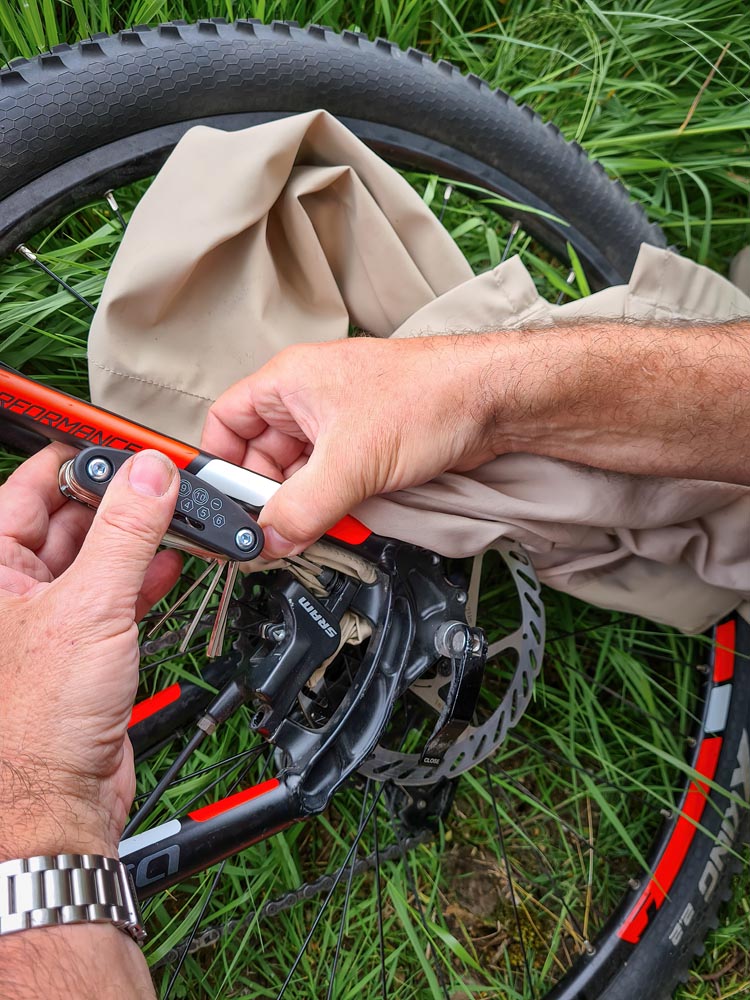 One thing we would recommend when cycling is to take a couple of tools with you just in case you need to carry out any emergency repairs. However, I wouldn’t recommend buying those cheap Chinese tools that are made from really old cheese, and round off or fall apart as soon as you use them. Luckily, whilst our tools were indeed of the Chinese cheese variety, they did survive just long enough to help us out of a spot of bother.

Armed with my OkiKoky 2000 allen key set, I just about managed to remove the rear brake calliper. This took some time, however, as my trusty utility belt tool was a bit too bulky to fit squarely into the allen key head and turn at the same time. Rather a long time later, turning the securing bolt about 5 degrees each time, I finally released it. All I needed to do then was get Helen’s coat out from between the pads, so with a large amount of pulling and a small amount of swearing, I released it. 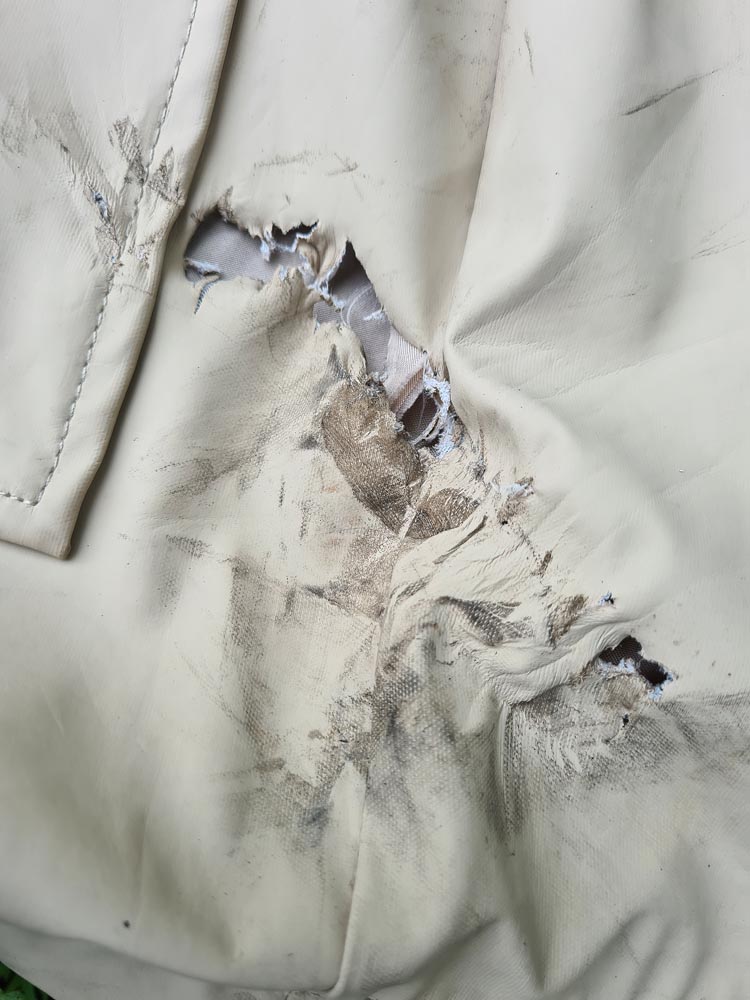 As you can tell, the coat didn’t really enjoy its whizz round in circles, followed by being squeezed by the jaws of death, so once we’d reassembled the bike and returned to the car park mostly unscathed it ended up unceremoniously dumped in the bin.

You can hire bikes from Brown End Farm Cycle Hire, which just happens to lie at the start of the 8 mile Manifold trail which follows the meandering river.

If you’d like to try another cycle route nearby, why not visit the Tissington Trail. Another fabulous opportunity to cycle and enjoy eating cake without feeling guilty.