In the mistaken belief that things would probably be a lot drier in the woods, we decided to venture up Cotton Dell – a delightful wooded valley between the mayhem of Alton Towers and the tranquillity of Oakamoor.

We were probably still a week or two away from the bluebells at their best, but the place is carpeted with them, so it’s going to look fantastic. 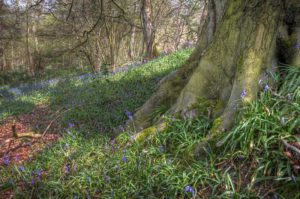 As is my want, I decided to trust to the technological wizardry that is GPS, in navigating our route. However, there appeared to be some disagreement between where the OS Map suggested the path went and what some piece of future space junk, orbiting 12,600 miles above us, decided it was.
As a result, we ended up navigating a somewhat unclear path across a stream and through a very deep bog! 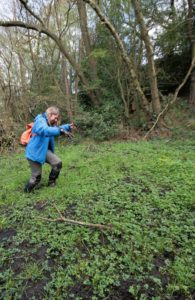 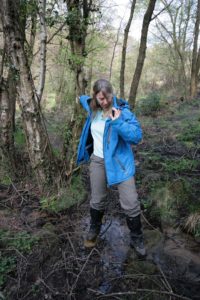 For some strange reason, known only to herself, Helen decided she wouldn’t follow my (sensible) route but would forge her own path, directly through the said bog. The following fiasco entailed me reaching out with tree branches so she could yank her submerged legs from the stinking, squelching swamp and almost face-planting a tree as she stumbled forward, stuffing her hands into the mire for support.
I did wonder, at one point, if I should wander off in search of help, but decided that it was quite likely, on my return, we would find only her head above the quagmire – her lips trying to form some kind of straw, vainly sucking at her last breaths of fresh air. Or maybe I’ve just been watching too many old films. 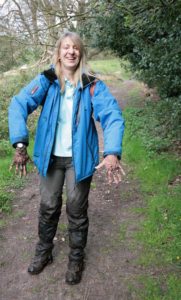 Needless to say, this all turned out to be entirely my fault.

As luck would have it, a local farmer decided to send a helpful horse to our rescue. This equine Good Samaritan was more than happy to lick Helen’s muddy hands clean in exchange for just a few handfuls of lush grass. 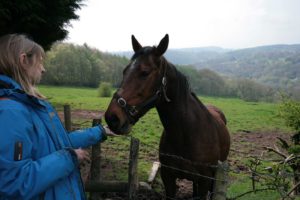 On our return to Oakamoor, we were greeted with a beautiful view, right across the Churnet Valley. 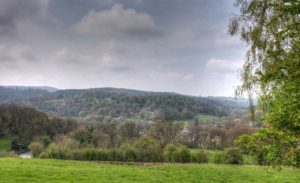 As we descended into the village, we decided to carry on past The Laurels and take a quick trip to the riverside. This gave Helen a chance to wash her muddy boots in the river and for me to capture a final few photos. 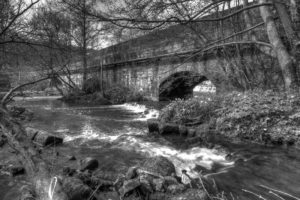 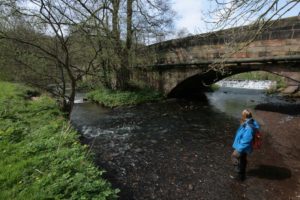 All that was left, before Helen dived in the shower to wash off a large amount of bog from her boots and trousers, was to wander back up the hill to home. 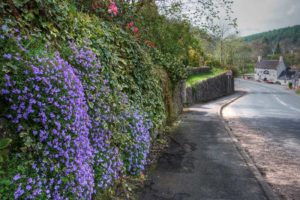 After the earlier ‘bog incident’, we were wary of another quagmire masquerading as a footpath, so decided to go around the next muddy looking customer we came across.
As luck would have it, this led us onto the High Churnet Valley path. I’ve no idea what’s it’s really called, but it seems as good a name as any.

This lovely winding path meanders along, about 150ft above the disused railway, providing great views across the valley.
Halfway to The Ramblers Retreat, we came across something that reminded me of The Magic Faraway Tree (Enid Blyton). This impressive-looking tree appears to be growing straight out of the rocks, as though it were hewn from the very same stuff. 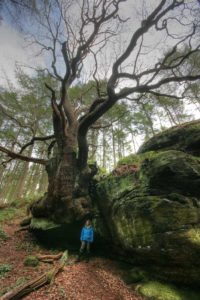 This tale from my childhood is as fresh today as the day I first read it, some 40 years ago. Whilst I consider myself fortunate to have been brought up on Enid Blyton’s books, it’s interesting to note that the character names in the later reprints have been changed from Dick and Fanny to Rick and Frannie…

As you may know, unless you’ve never read this blog before, we’re on the doorstep of Alton Towers. This is fantastic, from a business perspective, but what many of our guests don’t realise, whilst they’re screaming like girls (including the men) hurtling up, down and round and round, is they’re literally within a stone’s throw of some of the most beautiful countryside too.
This is perfectly illustrated by the view you’re confronted with, at one point along the path. 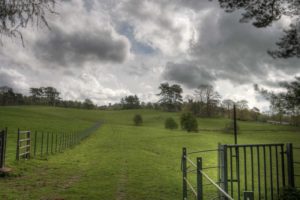 Whilst the fields in the foreground have grazing sheep with their “ickle baby baa lambs” as Helen calls them – In the background are the Towers of Alton and the steel tracks of Oblivion, which just happens to be my favourite ride.

After a well-deserved break for some tasty scones and a pot of tea at The Ramblers Retreat, we returned along the old railway line towards Oakamoor.
Around the village is a very interesting Heritage Trail. This includes a number of illustrated boards showing the industrial history of the valley. One of these shows the old railway tunnel and crossing. 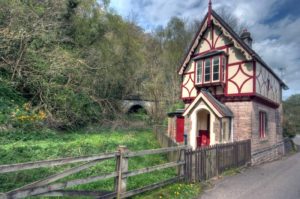 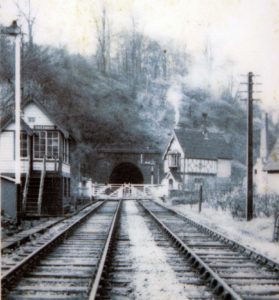 As you can see from the photos above, although the railway and tunnel are now closed, one of the original buildings still exists.  The Heritage trail map is available from various places around the village, including The Laurels.