We started our walk from the Miller’s Dale car park. ///serves.vibrate.ribcage
If you use the postcode you’ll end up in the wrong place, so we always like to use what3words, a fabulously simple navigator that will take you to any spot on earth with unerring accuracy.

You can also navigate there with Google Maps

A map and directions for this 4.2 mile walk can be found on OutldoorActive

As with most of our walks, there’s always a place to enjoy some tea and cake. And this is no different. In the carpark, you’ll find the old Miller’s Dale Station. Once, the largest train station in the Midlands.
There’s a nice little café here too where you can enjoy a small little snack or something a little larger. I had the scotch egg, which, on a freezing cold day in January was just the job.

After wandering down the nice, flat surface of the Monsal Trail for just 1/4 mile you’ll come across the Buxton Lime Kilns.
If you’re doing this walk in the winter you’ll want to make the most of this part of the lovely, dry, non-muddy trail, as you’re sure going to miss it very soon.

From 1880 until 1944, these lime kilns produced over 50 tonnes of quicklime per day. During the 19th century, the demand for quicklime increased for the growing steel and chemical industries as well as agriculture. To meet this demand, limestone quarries and kilns opened next to railways like this Midland line. The trucks would bring in coal to burn in the kilns and take the quicklime away. 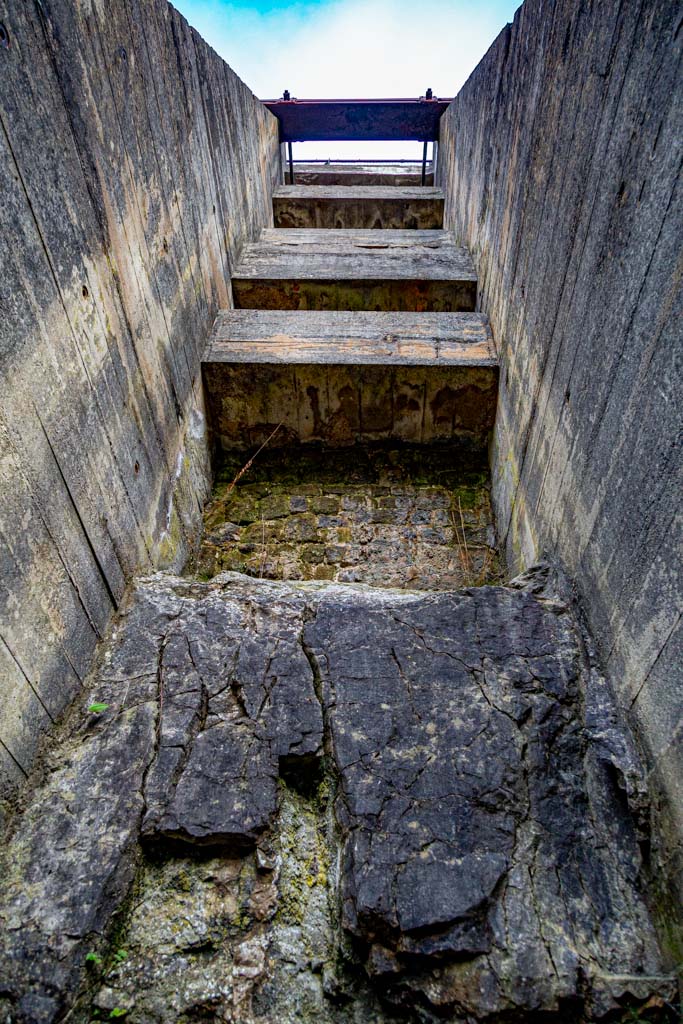 Inside the kilns, alternating layers of limestone and coal would be loaded on top of firewood to start the burning process. A man and a boy would work drawing out the quicklime from the bottom of the kiln (called ‘the eye’).

Today the kilns are home to wildlife. There are white boxes secured high up on the buttresses for swifts. They need height to be able to take off, as once hatched and left the nest, swifts can keep flying non-stop for up to 3 years. Yep, they sleep, eat and mate, all on the wing!

The dark crevices in the kilns are often used by hibernating bats in winter. Natterer’s, Brown Long-eared and Daubenton’s bat are common species in the type of habitat close to trees and rivers.

The drop down into Chee Dale begins at the first bridge you come to. If you’re lucky you’ll see some intrepid abseilers descending into the valley on the end of a bit of string. 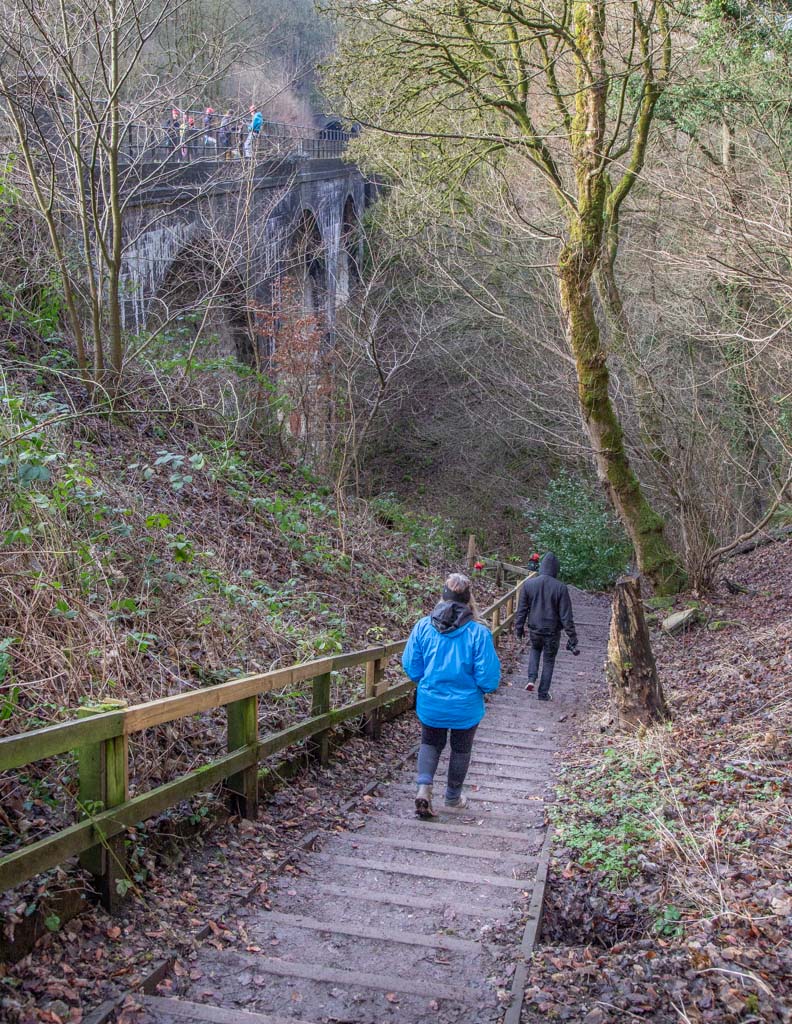 In the photo below, I assumed the guy waving was just being friendly, as I took the photo. However, very soon after, the waving turned into shouting. Apparently, I was standing in a dangerous position, even though it wasn’t marked as such, so he wanted me to move my backside, pronto.

I don’t know about you, but my more than basic understanding of aerodynamics told me that I wasn’t in any kind of danger should this youth fall suddenly to his death. Unless, of course, he was actually a flying bat in disguise, wherein he would spread his arms and glide gracefully onto my head below in an effort to cushion his landing.

We ignored the Elves of Safety man and turned towards our riverside path. 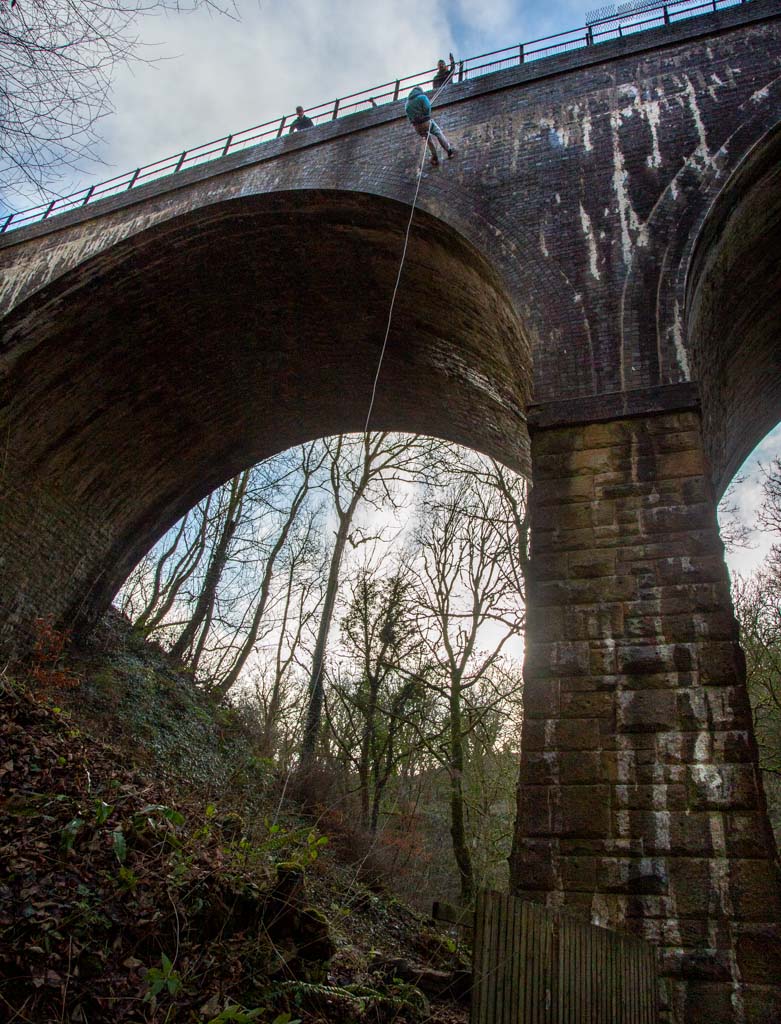 Despite it being a cloudless day, this was almost the last time we were going to see the sun until our return to the Monsal Trail high above. The steep-sided nature of this ravine means that in late January, the sun hardly ever gets high enough to penetrate its mossy depths.

The next 2 miles of the walk are all alongside the river Wye as it winds and tumbles its way along the valley. Sometimes deep and narrow and sometimes wide and shallow, gently bumping over rocks, as you can see below. 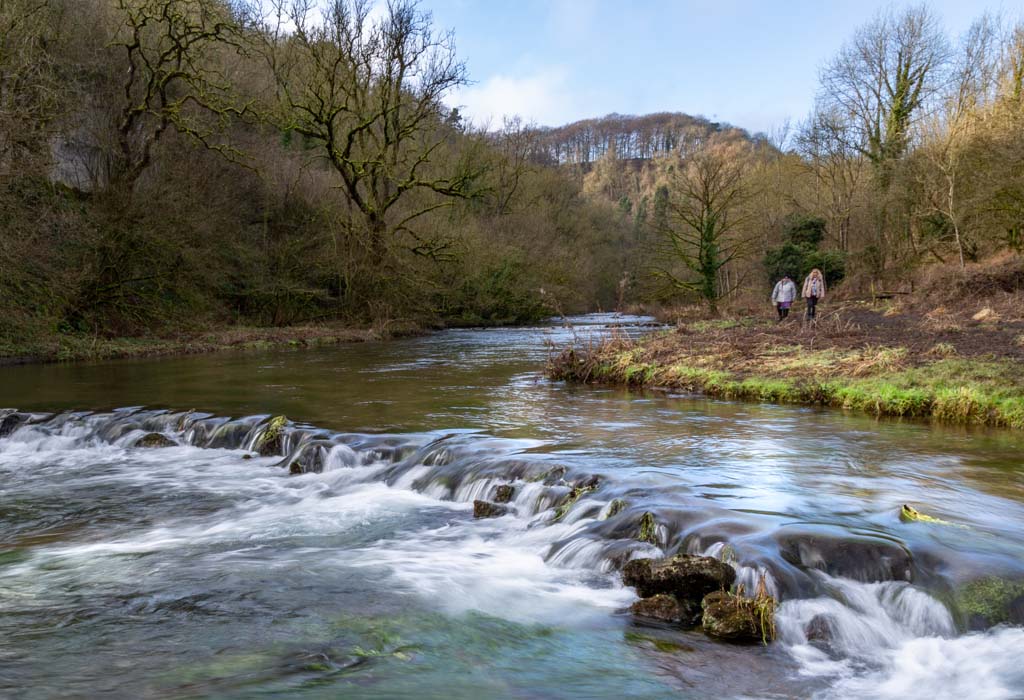 As we progressed past Chee Dale Nature Reserve towards Warmhill Springs, things start to get muddier. A lot muddier. Oh, and rocky too. This great combination of dark brown/grey, almost purple mud, covering rocks worn smooth by a million footsteps is quite a challenge. As such we wouldn’t recommend taking very young children, or anyone who’s not 100% confident on their feet, on this walk.

In the winter, you will need sensible walking boots. Do not come without them. You’ll thank us later. 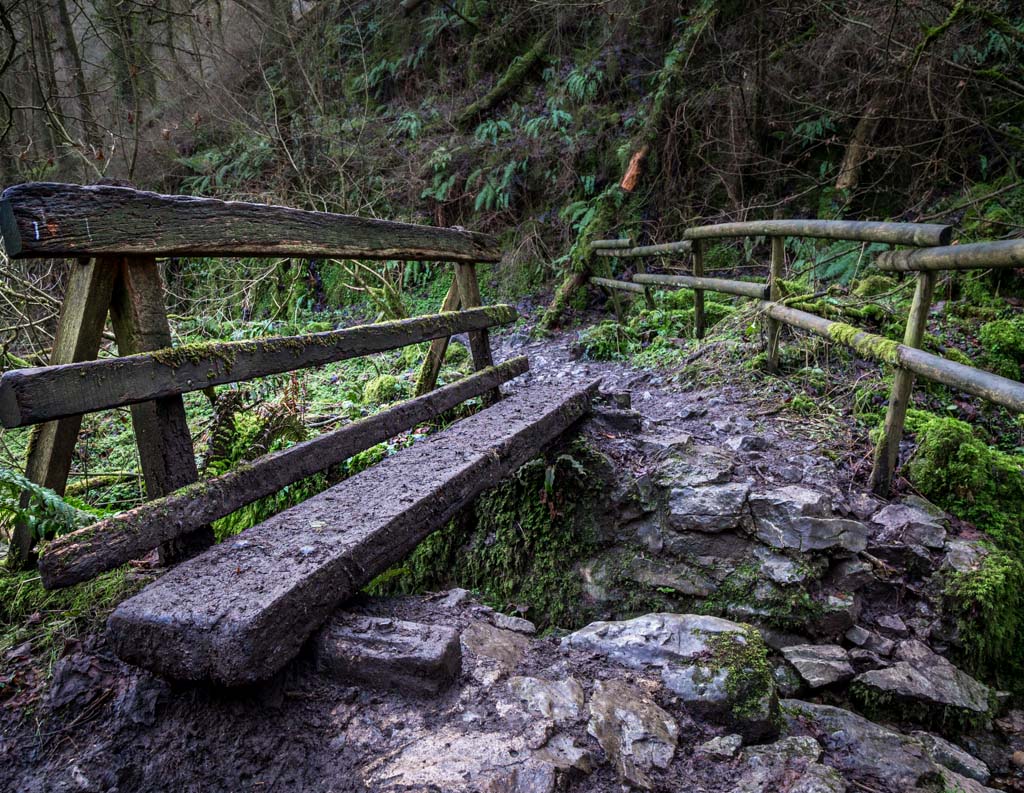 There is some blessed relief from all this mud. It comes in the shape of a boardwalk. The boardwalk leads you into a kind of enchanted forest where the sunlight only manages to penetrate in small doses. This leads to virtually everything being covered in a deep carpet of moss, making the landscape look exceedingly green with a lovely yellow shimmer at the edges.

Even large trees can’t escape this coating, with every branch smothered in a green, fluffy-looking blanket. 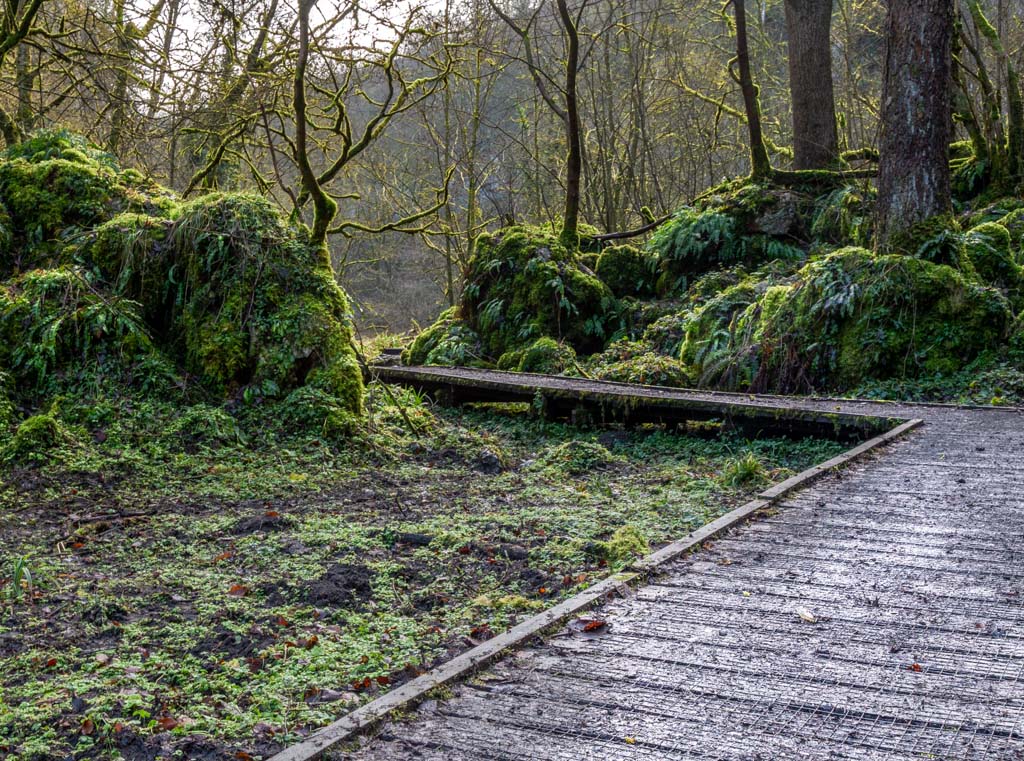 The route now meanders around the bottom of Chee Tor, a massive limestone formation. Opened in 1863, the Midland Railway once ran through this impressive limestone gorge. The Victorians engineered this route, cutting through the rocks to construct three tunnels as well as building the bridges to span the river.

This is probably the most challenging part of the route for walkers too, as the path runs along the steep rocky walls, requiring a bit of clambering up and down the slippery surface.

Mercifully, if you’re walking this in Winter, the path soon emerges into something more navigable.

The lack of mud is replaced mostly by rock, as you navigate along the bottom of the massive stone walls of the valley. We thought it best not to concentrate too much on the large cracks in the rocks above our head, lest our imaginations get the better of us, with visions of us being crushed under a massive fall.

We also noticed, in many of these walls, hooks and eyes had been drilled into the limestone. Clearly, some intrepid souls are into climbing these vertical, or over-vertical walls. If you’re into that kind of challenge, why not pay it a visit. 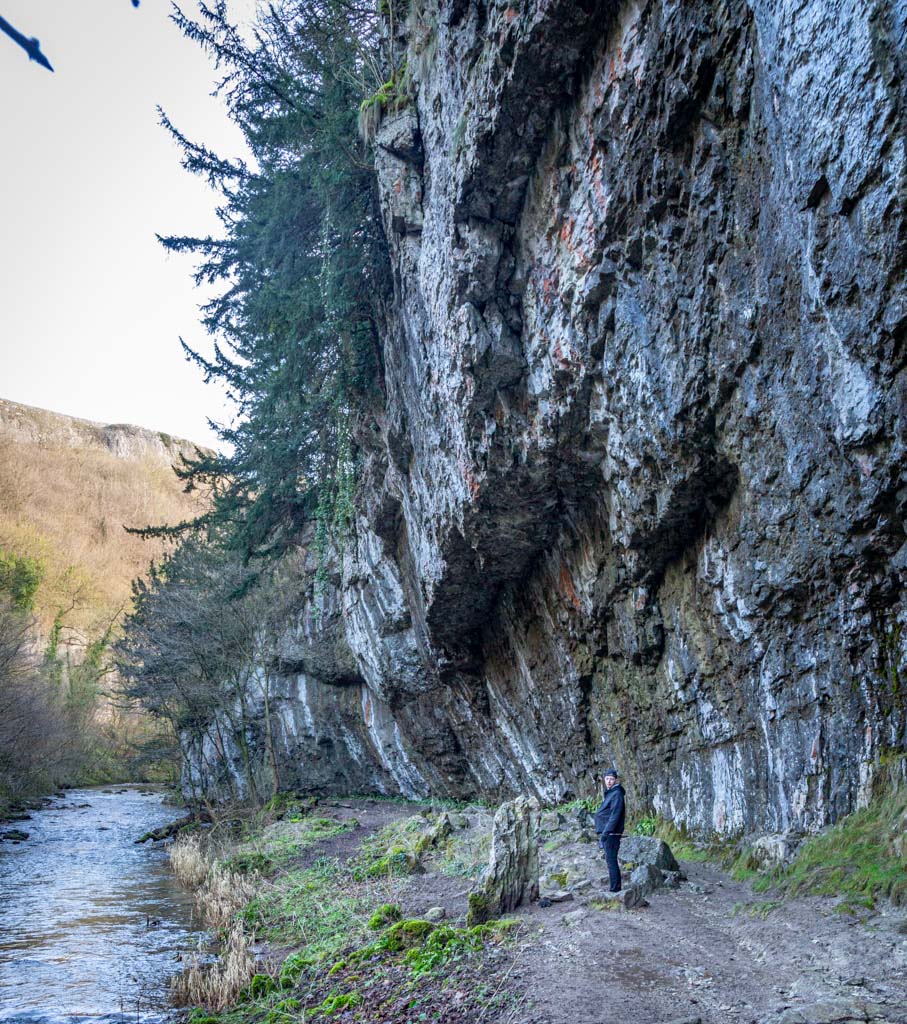 It’s worth highlighting that this route is not always navigable. If there’s been a lot of rain, you may want to give this a miss. Not due to the mud (did we mention it’s muddy?) but because at a few points along the route you have to walk in the river!

As you can see from the photo below, there are some quite long lines of stepping stones, making it possible to venture further up this steep-sided ravine. A water level rise of just a few inches would see you literally walking in the water. Not something we would recommend. 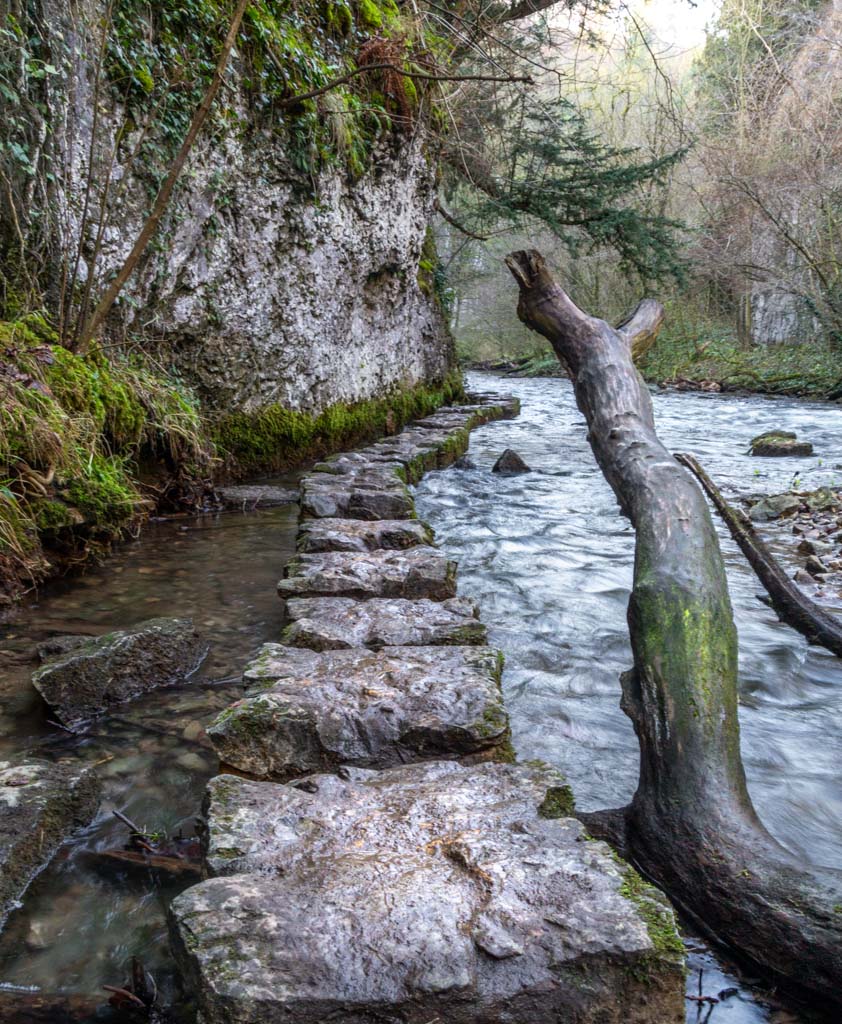 After a mile or so more of relatively sensible paths, you’ll come across the second of the stepping stones. These are even longer than the first, as they wind their way around the bottom of the rocky walls.

Whilst it’s tempting, and indeed sensible, to ensure your feet are going to step on a stone, and not the water in-between them. It’s also worth noting that the limestone wall sticks out a fair way at certain points. These protrusions are great to lean against, as you navigate the stones, but some of them are just the right height to whack you in the head too. Being rendered unconscious at this point would not be a great outcome. So keep your wits about you. 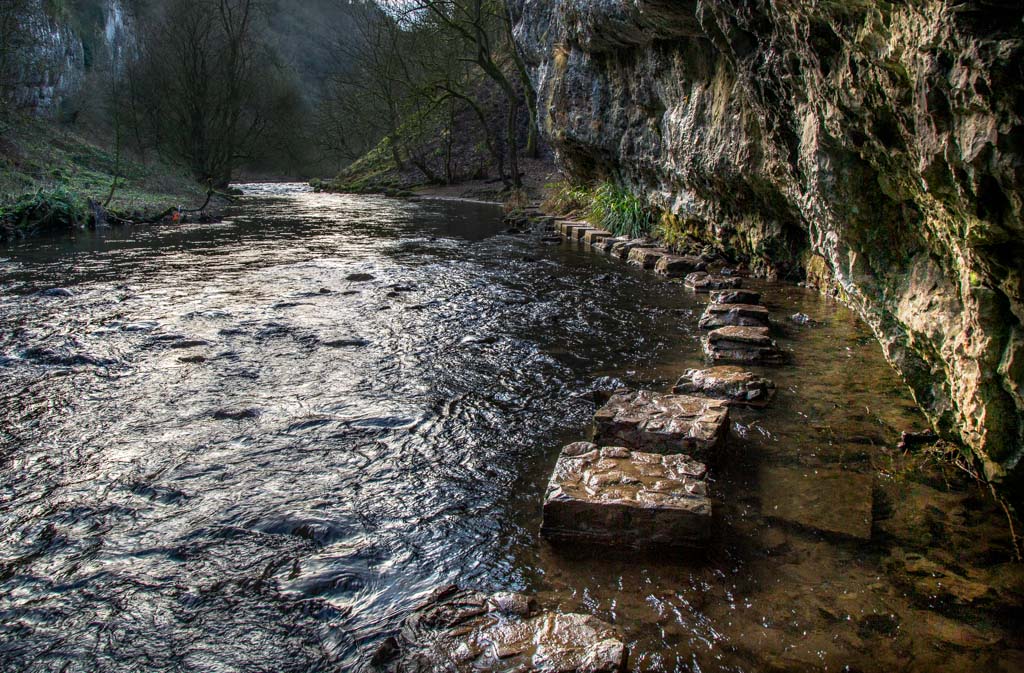 Check out the video of us crossing the stepping stones 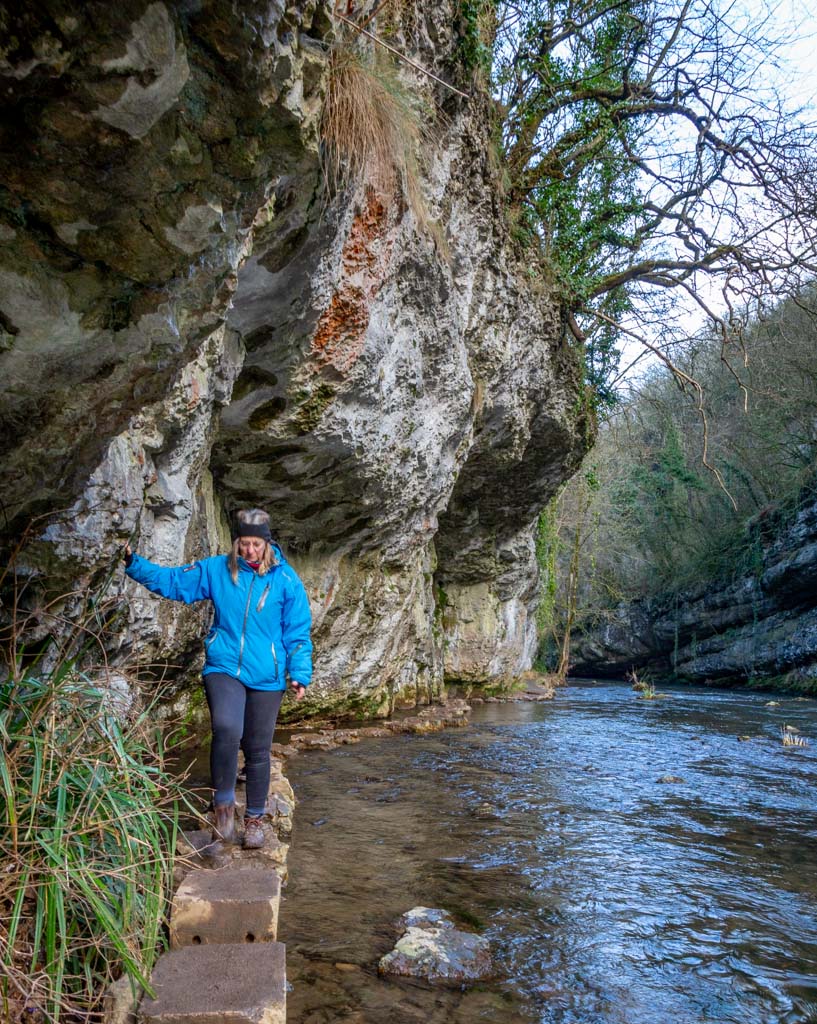 Having navigated the stepping stones successfully, you’ll pass under one of the viaducts that used to form the railway line, and now the Monsal Trail. There used to be a small wooden bridge here that would enable you to ascend to the trail. Unfortunately, the bridge is in such poor condition that it’s been closed – awaiting repair.
In another mile or so you’ll be walking across this viaduct, back to your start point. 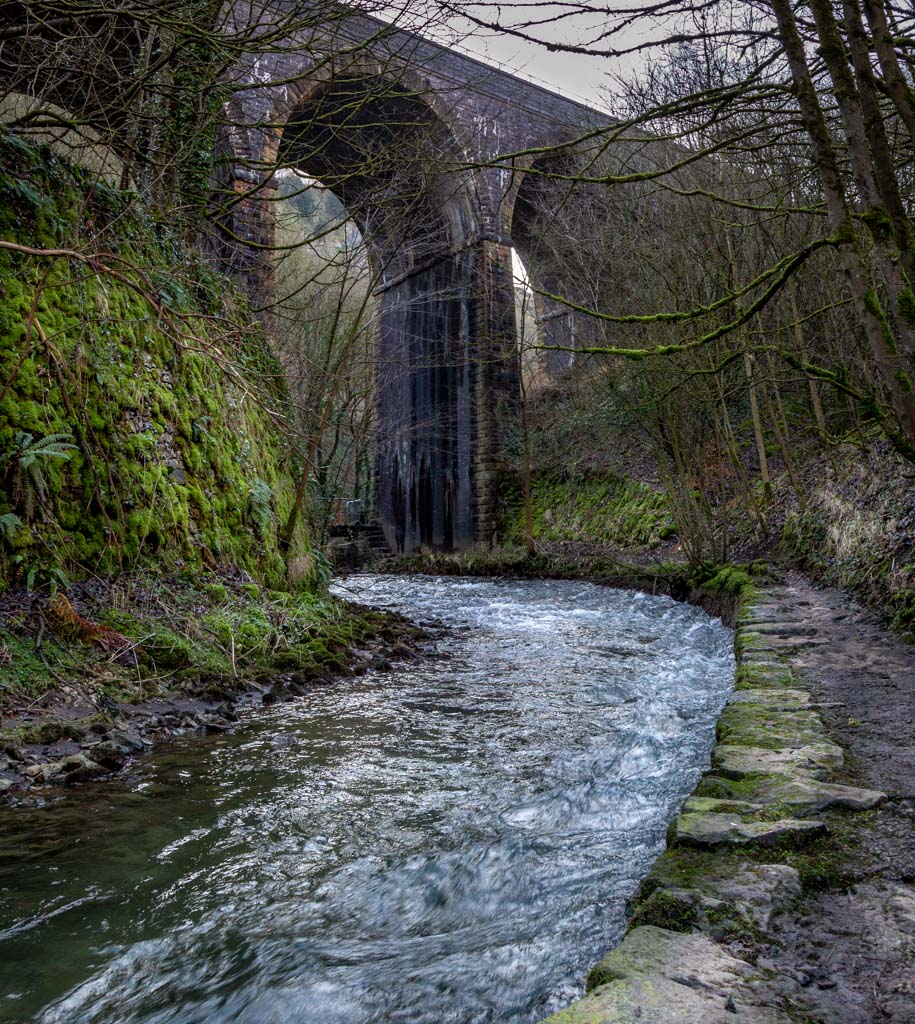 Still, that gives you an excuse, should you need one, to carry on to Blackwell Mill.
Beside the river sit four charming cottages, where you cross the old bridge. You can probably tell that the photo below wasn’t taken in January. In fact, it was taken in mid-summer, on a boiling hot day, when we rode the Monsal Trail on our bikes. 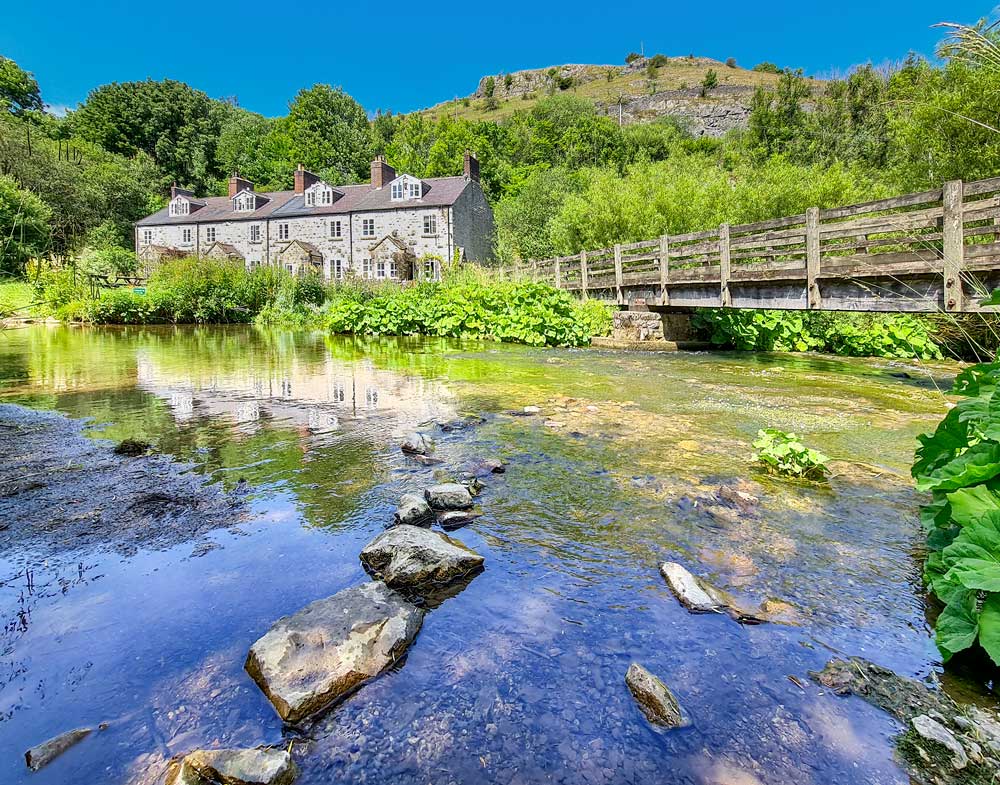 Talking of bikes. Monsal Trail Blackwell Mill Cycle Hire is situated here, although they’re only open in the Summer months. We know this, as for the previous three miles of walking, I’d been promising myself a cup of tea at their little cafe shack. But no. In mid January, when it’s freezing cold, most sensible people are indoors so they’re closed.

Despite the disappointment of missing out on tea, we ascended the valley to rejoin the Monsal Trail.
This gives you an easy, flat, one mile walk back to the car, via a couple of the tunnels along the line. 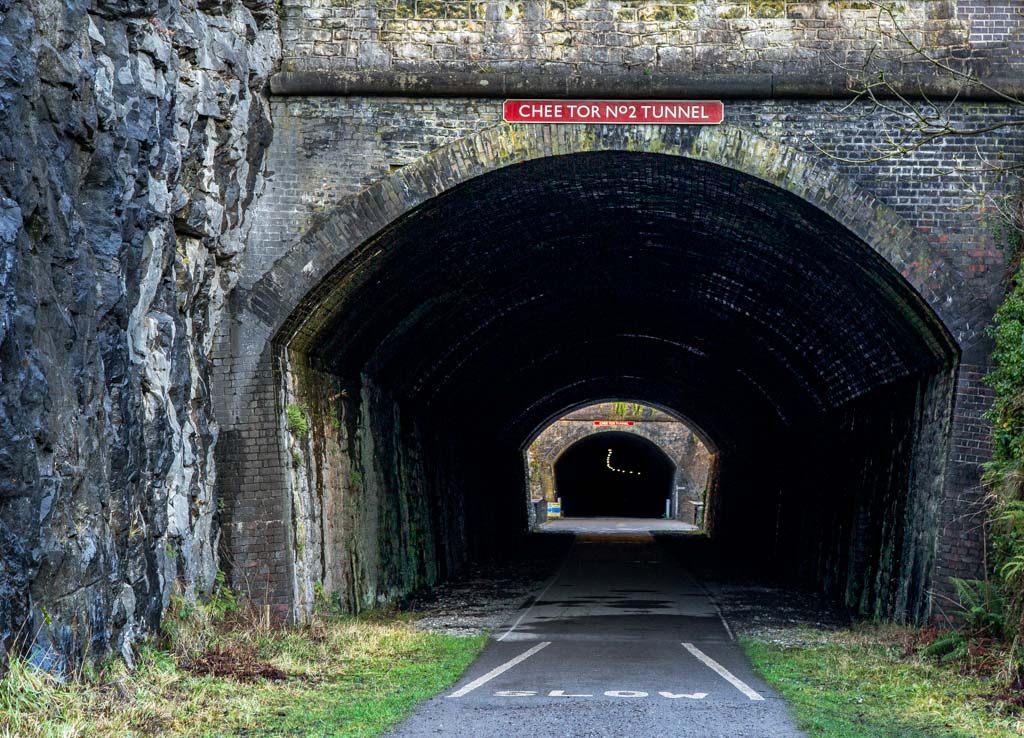 Chee Tor Tunnels numbers 1 and 2 are separated by a 50-foot high bridge over the River Wye. This is the one we’d previously walked under. The railway then enters Rusher Cutting Tunnel crossing another viaduct over the river again. Unsurprisingly the line was both difficult and expensive to construct since it had to go round the base of the 300-foot cliff, Chee Tor.

As with many local lines, the last train ran on the railway in 1968. Today, you can enjoy 8 1/2 miles of traffic-free walking, cycling and horse riding along this former railway, now the Monsal Trail; passing through the six open tunnels along the way. So why not explore the spectacular limestone scenery all the way from Bakewell to Wyedale near Buxton.

If you’re feeling a bit hungry after your walk, pop into The Anglers Rest for a spot of lunch.

Thanks to @findyourfootsteps for providing the route for this walk.

← Cycling Near The Roaches in Staffordshire