Where is Alton Towers?

It’s a question that’s asked a surprising number of times. And probably with good reason. So where is Alton Towers? Well, the answer is probably more difficult to answer than you may imagine. Sure the official answer is Farley Ln, Alton, Stoke-on-Trent ST10 4DB, but that’s only useful if you happen to be a sat nav, and even then your sat nav is likely to take you down some weird and wonderful single lane tracks (or roads as we like to call them around here).

“Alton Towers Theme Park is in Staffordshire”, is a common answer, but let’s face it, who knows where Staffordshire actually is? Well, we do because we live here, but before we bought The Laurels B&B we had as much idea as most other people. “It’s in the middle somewhere” or more commonly, and more incorrectly “It’s up North”. If you happen to live in the South of France, Alton Towers could be considered to be “up North” or “au Nord” as they’d actually say, but it sure ain’t in the North of England.

Staffordshire is in fact slap, bang in the middle of England. That’s why it’s called The Midlands. It’s pretty much equidistant between Southampton and The Scottish Border. It’s also where The Peak District is. “Surely the Peak District is in Derbyshire” I hear you say. Well yes – a lot of it is, but one-third of it is also in Staffordshire.
It’s also the home of Stoke on Trent. Another place you’ve probably never heard of, but it was the birthplace of quality pottery in the UK and is still the home and producer of pottery from names such as Wedgwood, Portmeirion, Emma Bridgewater and many more.
If you’ve never heard of any other these potteries, we can almost guarantee you’ve heard of this Staffordshire company. JCB. Yes, that’s right. Those big yellow digger things were invented in Staffordshire and continue to be made here.

So that’s the county sorted out, but where in Staffordshire is Alton Towers? This is the tricky bit. Alton Towers isn’t actually in Alton at all. It’s in Farley. It may have a very interesting history that’s intertwined with the little village of Alton, but the even smaller village of Farley, a mile or so up the road is where the entrance is. The theme park itself sprawls over a very large area set atop The Churnet Valley.

The Churnet Valley is a fabulously picturesque place (it’s also where The Laurels is located), where pretty much all you can see are rolling fields full of grazing cows, sheep, deer and a very large number of trees. In Spring and Summer, the surrounding area is so green, it’s easy to see why William Shakespeare wrote this for Richard II;

This royal throne of kings, this sceptred isle,
This earth of majesty, this seat of Mars,
This other Eden, demi-paradise,
This fortress built by Nature for herself
Against infection and the hand of war,
This happy breed of men, this little world,
This precious stone set in the silver sea,
Which serves it in the office of a wall
Or as a moat defensive to a house,
Against the envy of less happier lands,–
This blessed plot, this earth, this realm, this England.

It could have almost been written about The Churnet Valley!
In the photo below you can see Oblivion in front of the original house (where Hex is) and one of the towers to the right. 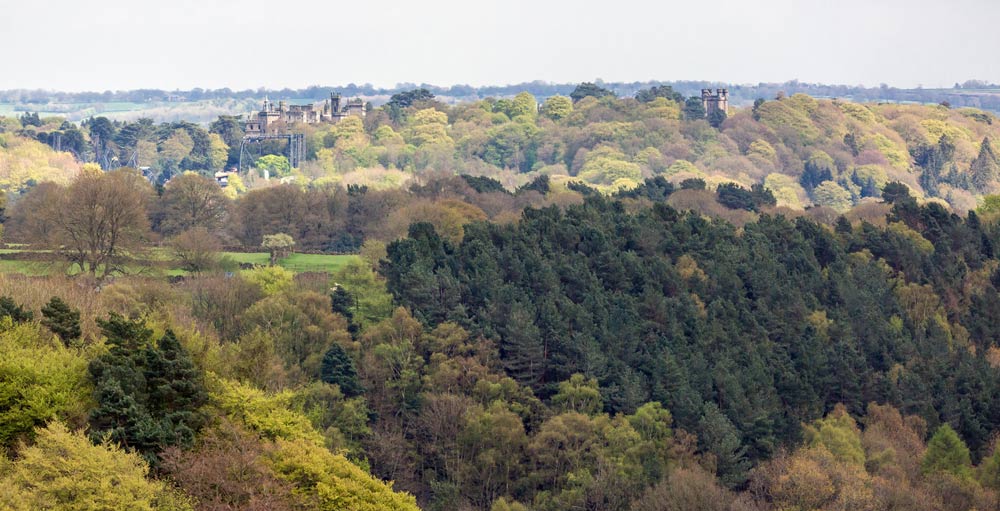 If you’ve never been to Alton Towers Theme Park, you may want to check out your route first. Imagine over 1.5 million people visiting one of the UK’s favourite attractions. Then think of the tiny village of Alton, with it’s ancient, narrow, twisting roads with hundreds of school coaches and thousands of cars trying to get through there on a summer weekend! It’s not pretty that’s for sure.
Still, there is a solution. You see, the vast majority of people travelling to The Towers do so using the same route. However, there are two ways into the main entrance. Luckily, The Laurels is on the quieter side of the two. This means travel time, if you’re staying with us, is still super quick even on the busiest days.

So there you have it. Alton Towers. It’s in Farley, in Staffordshire.